I had a very good night's sleep, waking at about 6.30 am and dozing on until about 7.15. All bar Alan surfaced at about the same time, and the five of us set off for a more leisurely stroll around Vendôme.  Alan had obviously decided that his leisurely start to the day should be more leisurely than ours!   We spent a good hour wandering around this very picturesque little town, admiring floral displays, the splendid cathedral and the scenery alongside the river.  Before long, it was after 9.00 am and we were not only running late for breakfast, but I was beginning to worry about our hoped-for early arrival at the circuit, bearing in mind that we still had to make our stop at Le Grand-Lucé.   We therefore joined Alan for breakfast, before setting off in the cars for Le Cheval Blanc at Le Grand-Lucé. 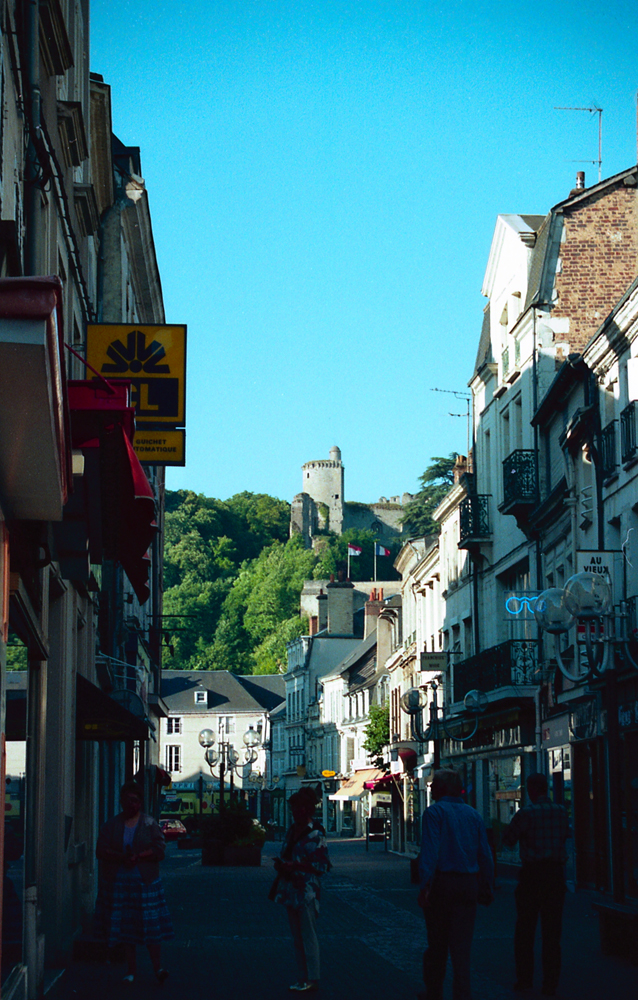 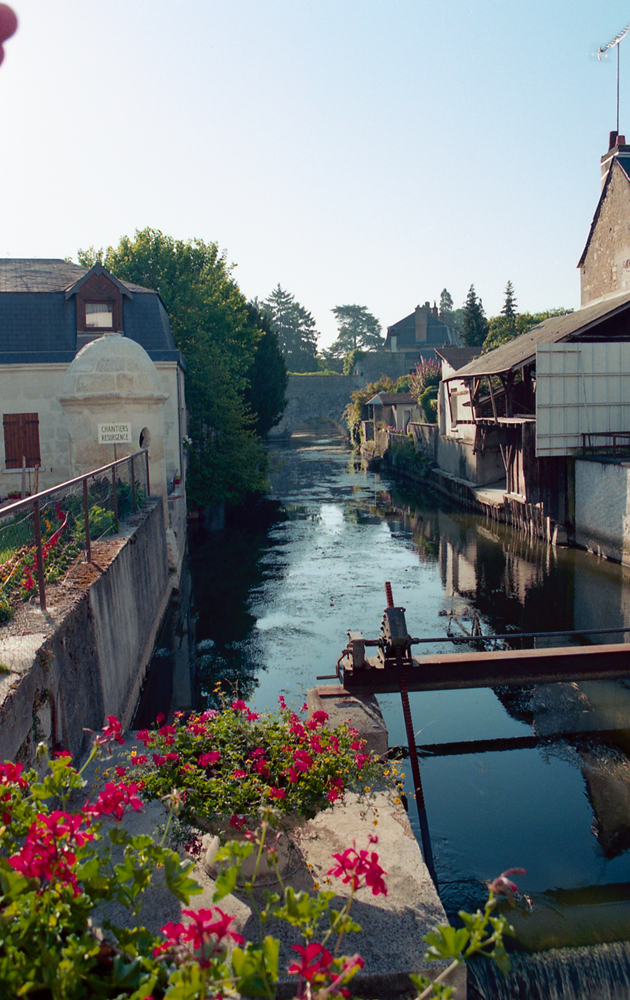 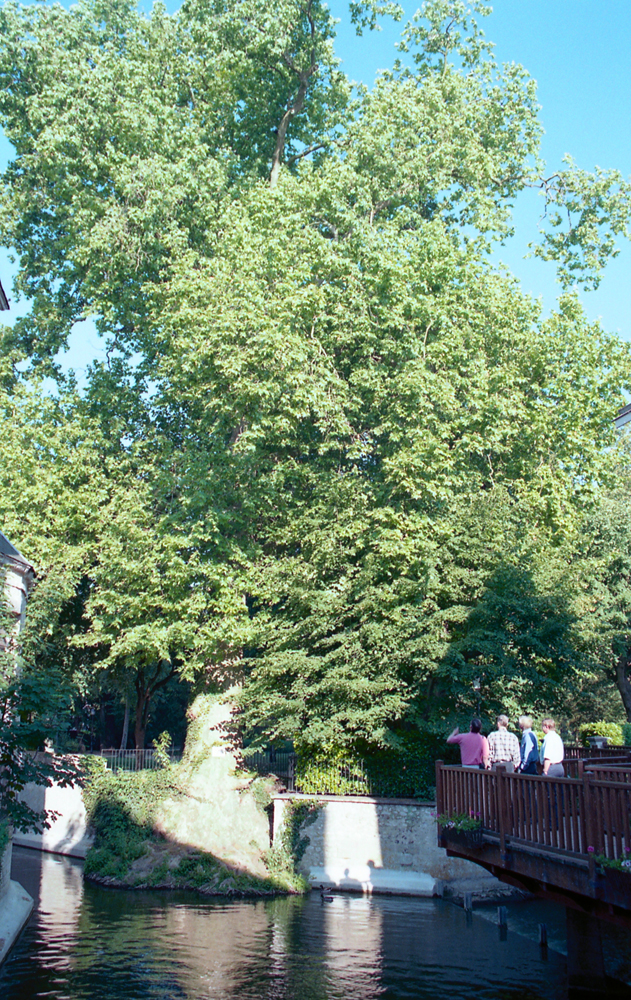 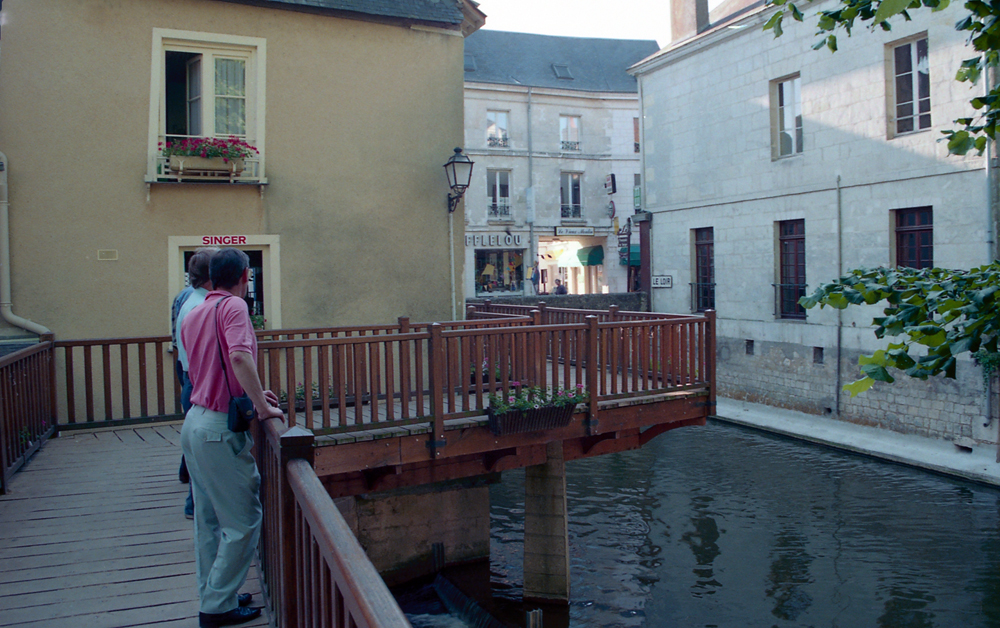 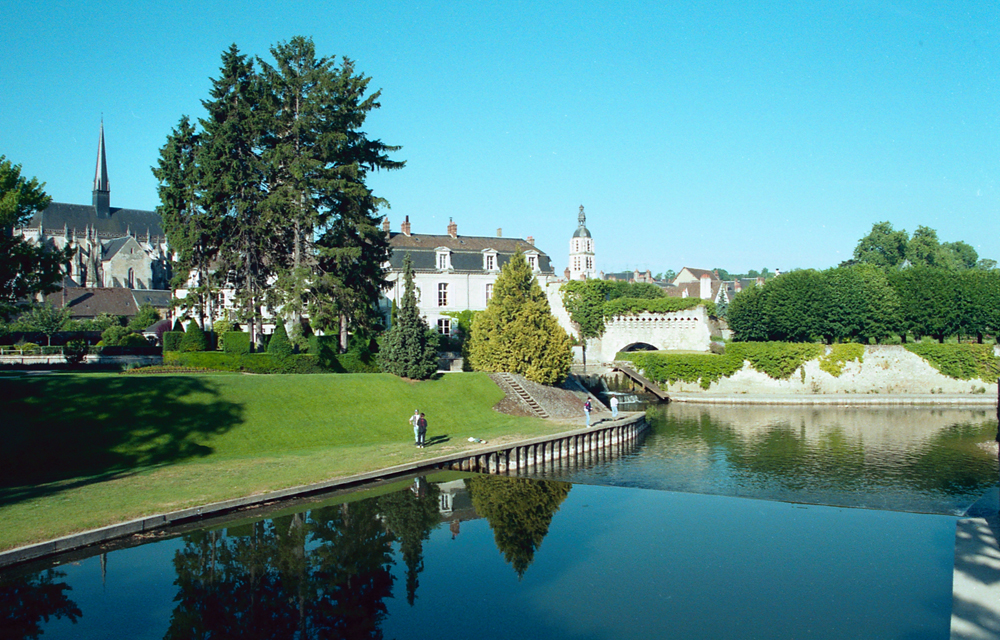 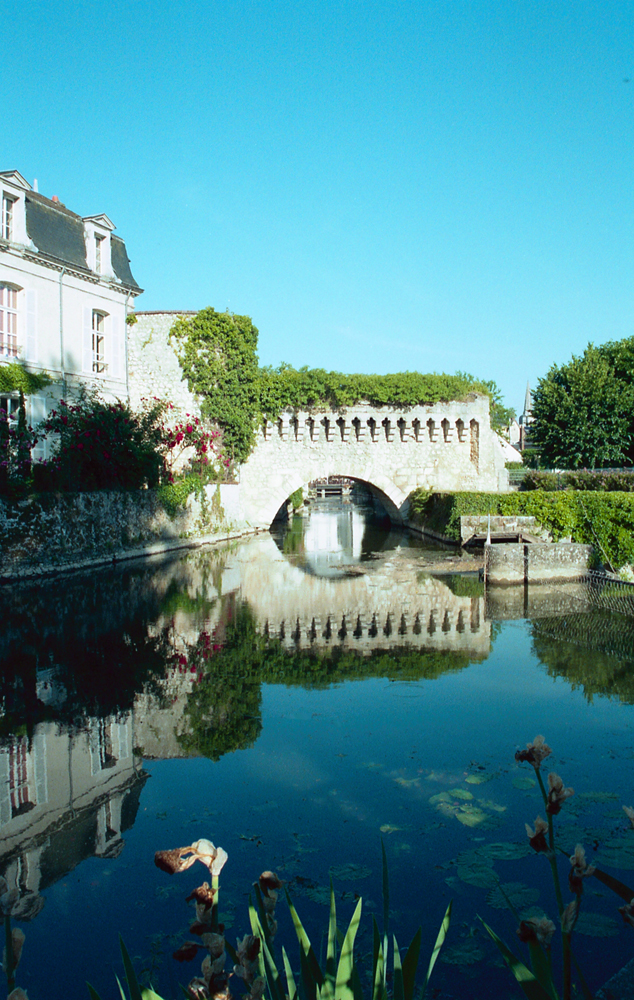 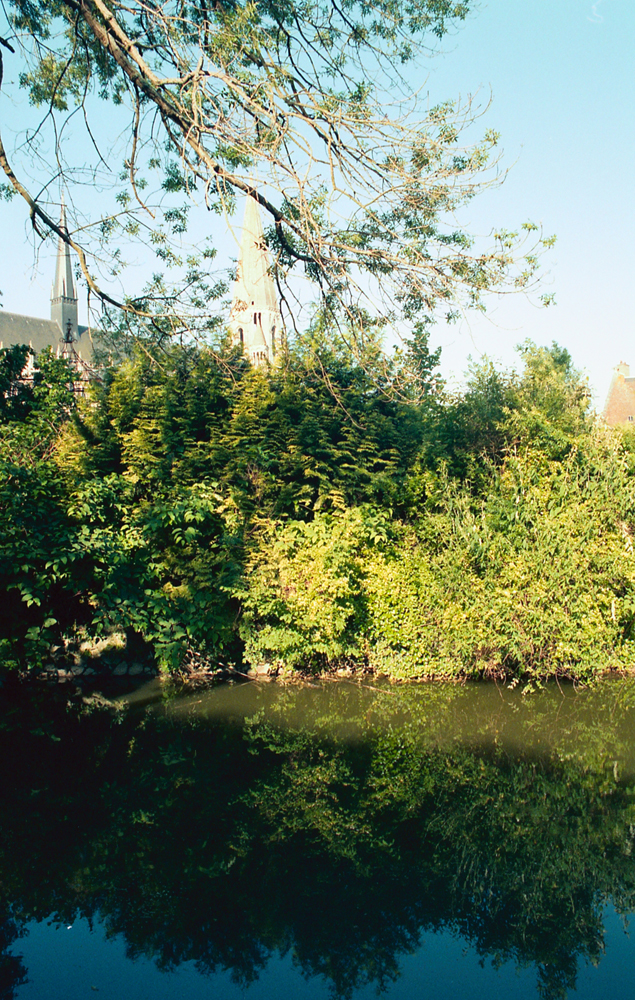 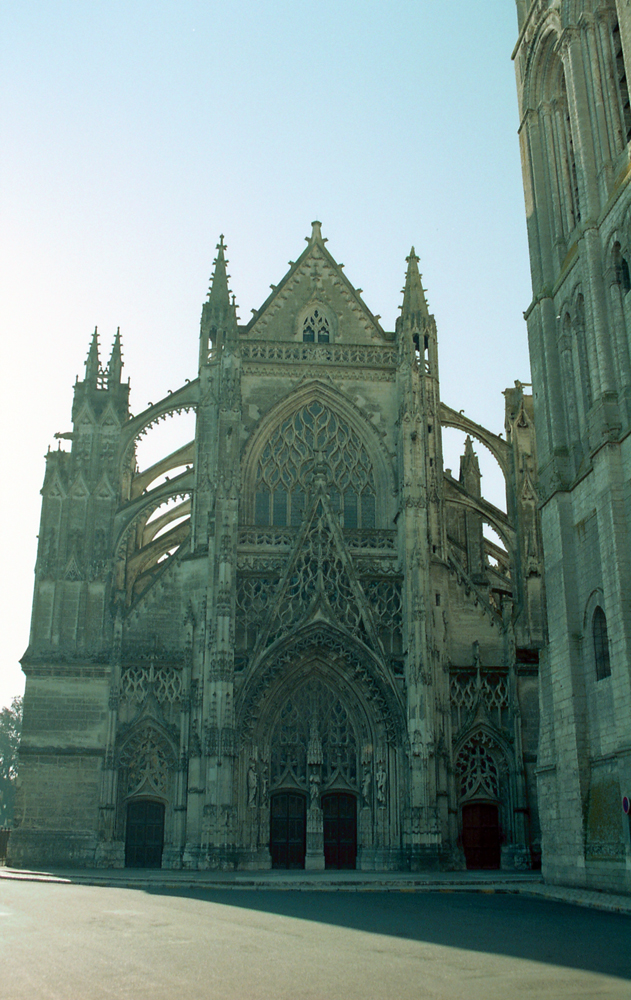 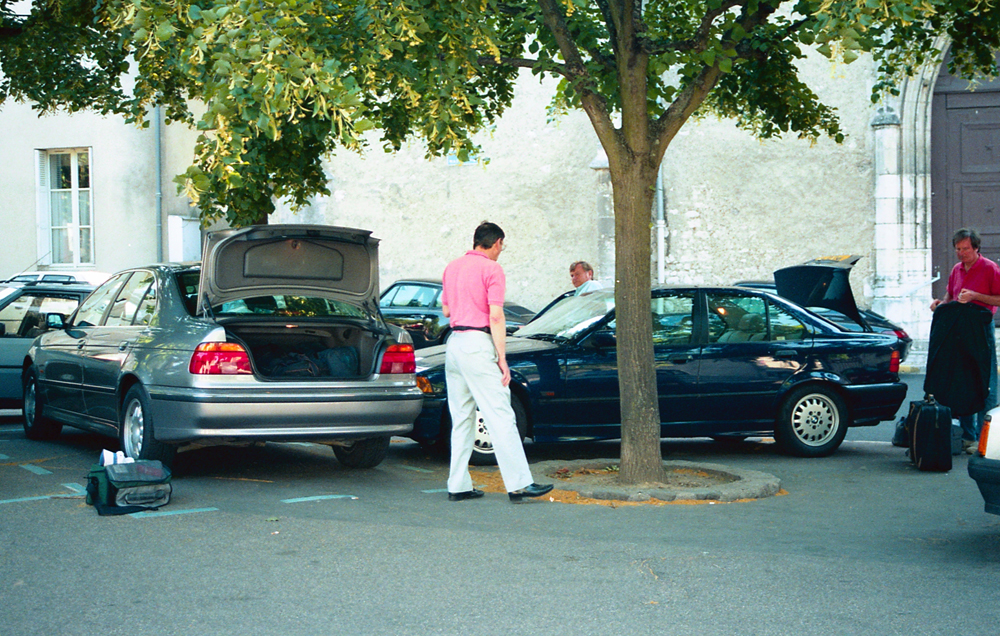 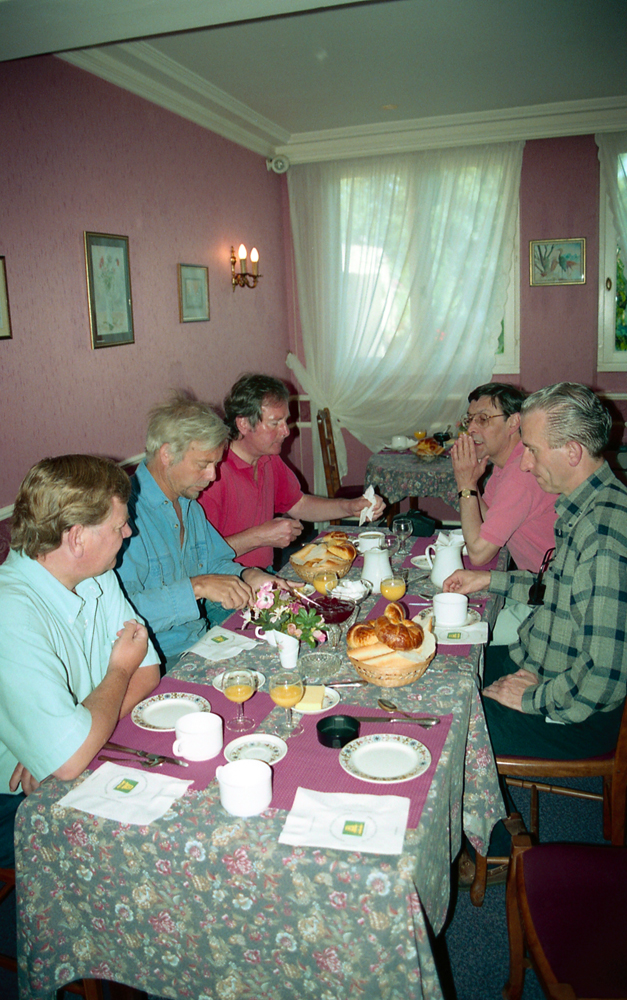 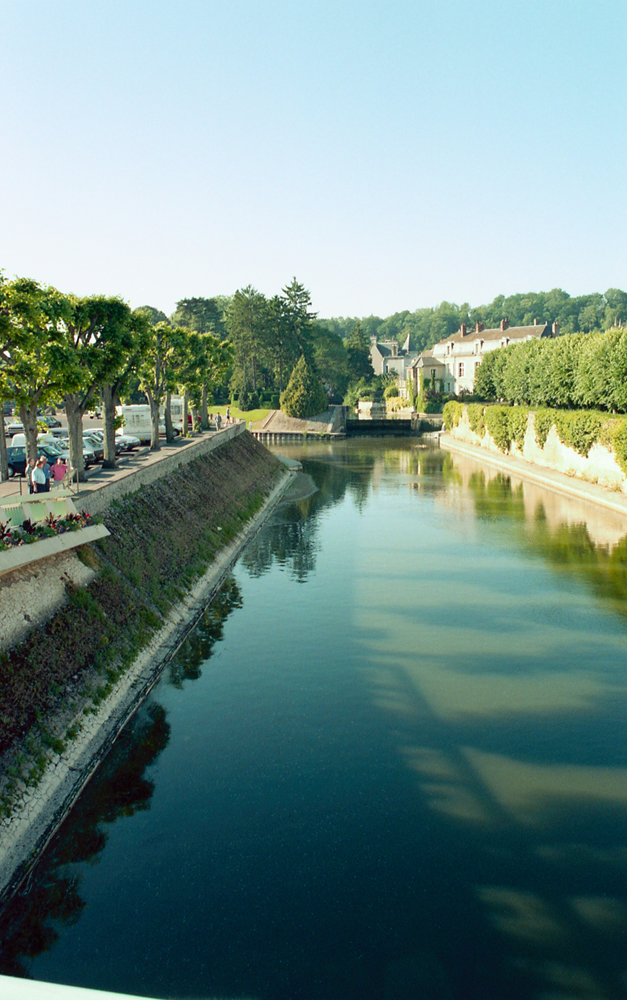 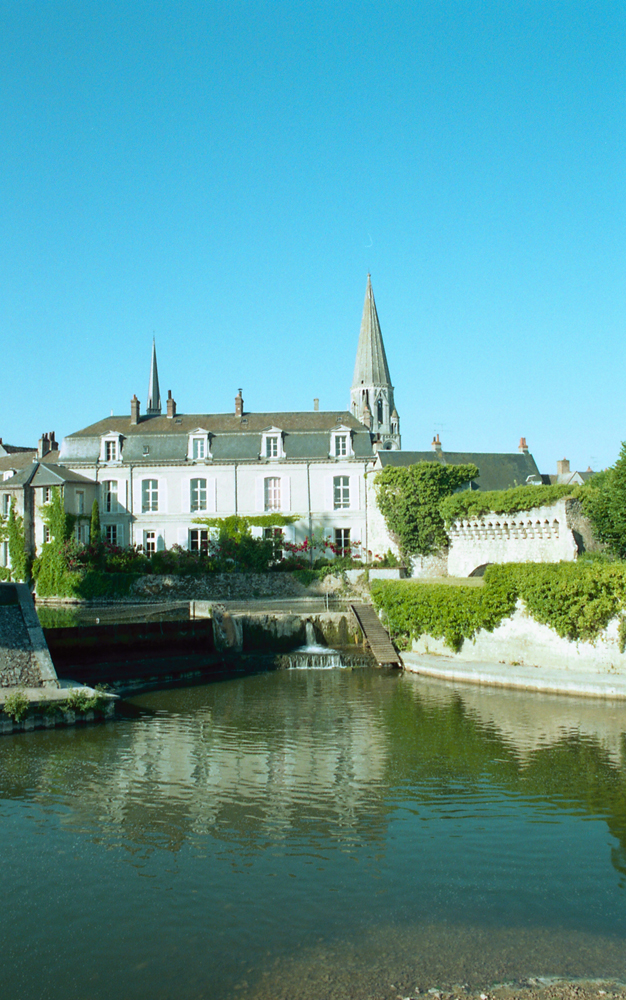 On our arrival, Ian and Nick spent ten minutes cleaning the roof of Ian's car with water from a nearby hosepipe and a newspaper, the birds of Vendôme having left some very annoying calling cards on the car!   While the others stowed their gear in their rooms (as usual I wasn't intending to leave the circuit on Saturday night), I headed up to the shops to look for a copy of the 1996 Le Mans programme (which I knew they sold in all the newsagents local to the circuit).   I managed to purchase my programme (which turned out to be first departure in the styling of the programme since my first visit in 1986).  When I returned, Martyn, Jim and Nick had decided that the weather was going to be very good, after all!  All three had changed into shorts, thereby putting on display three pairs of very white and knobbly knees!  Ian, Alan and myself decided to maintain the team decorum... 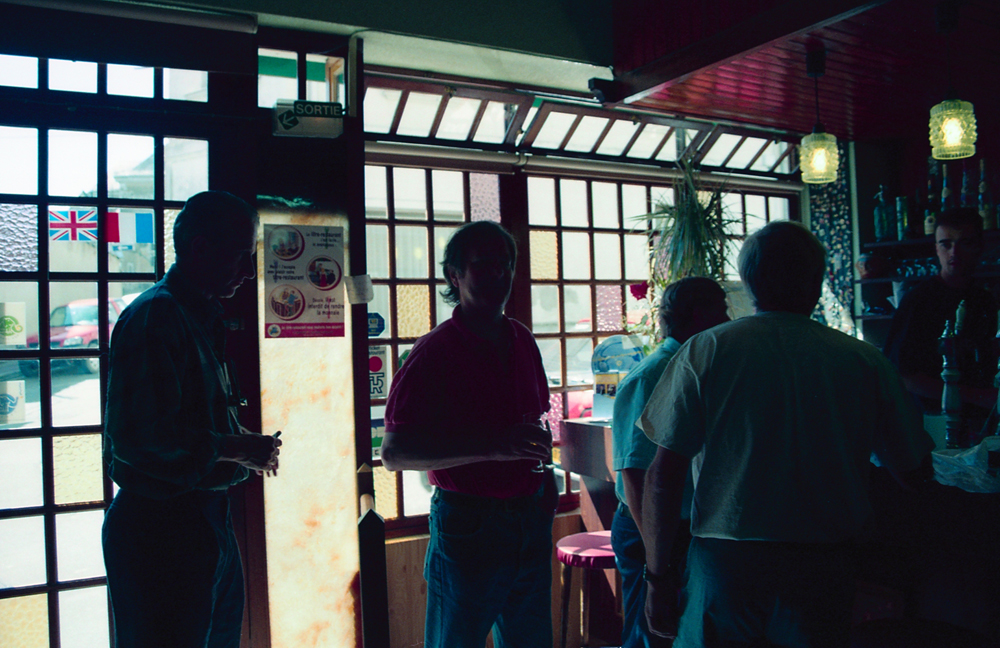 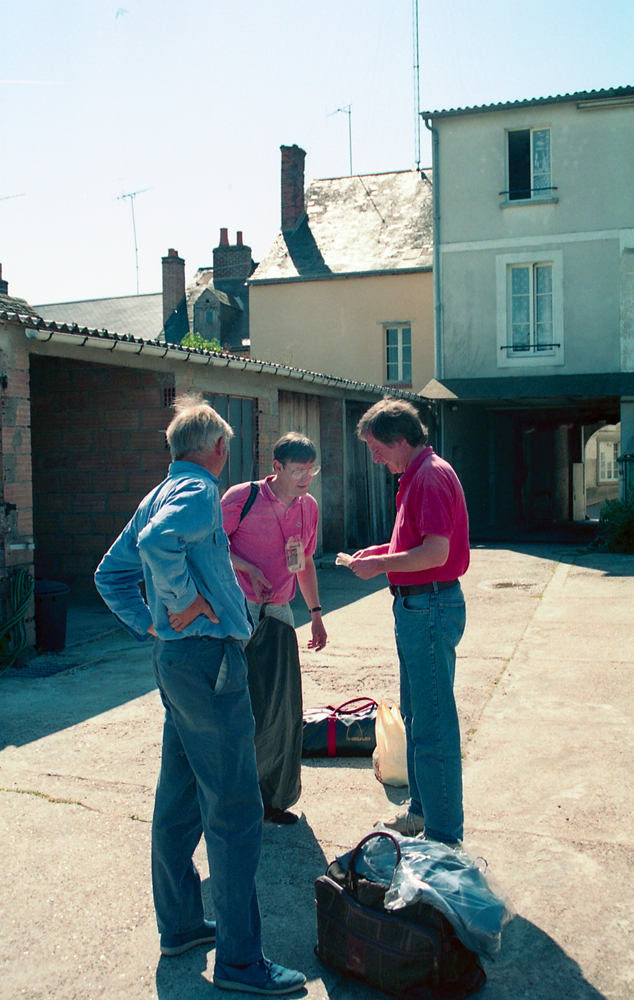 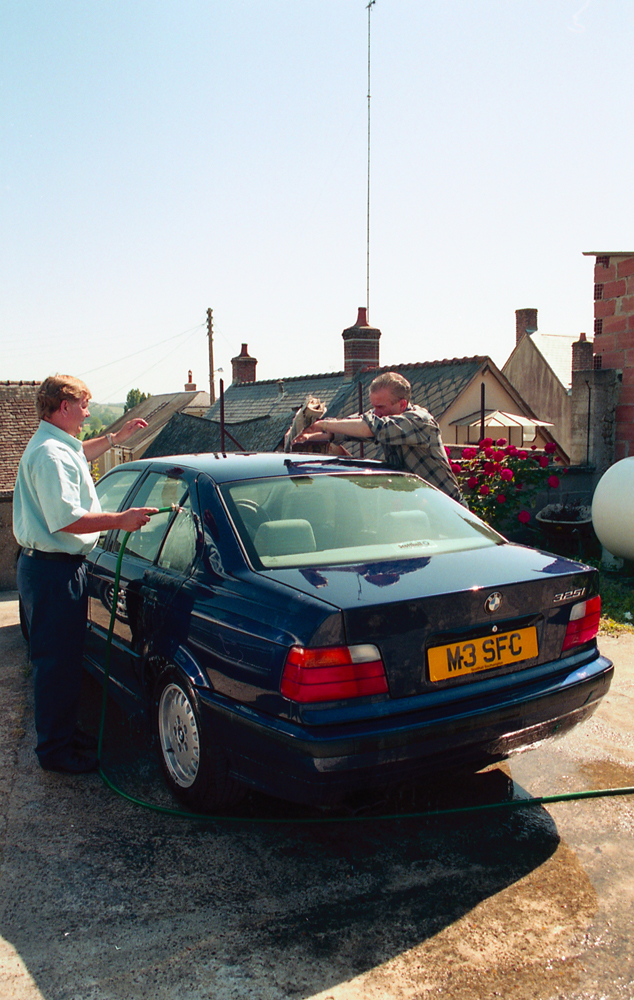 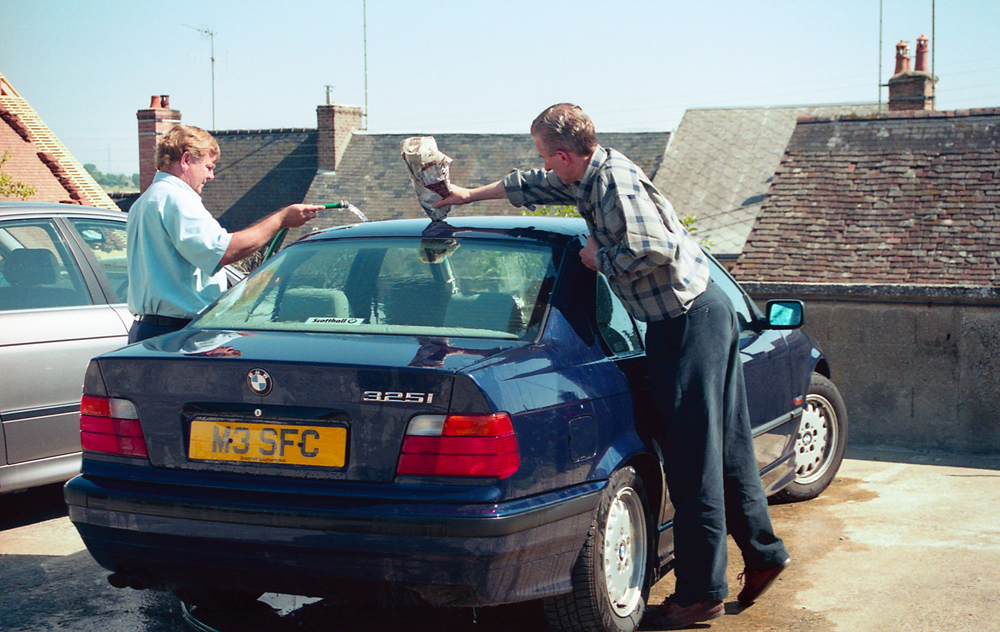 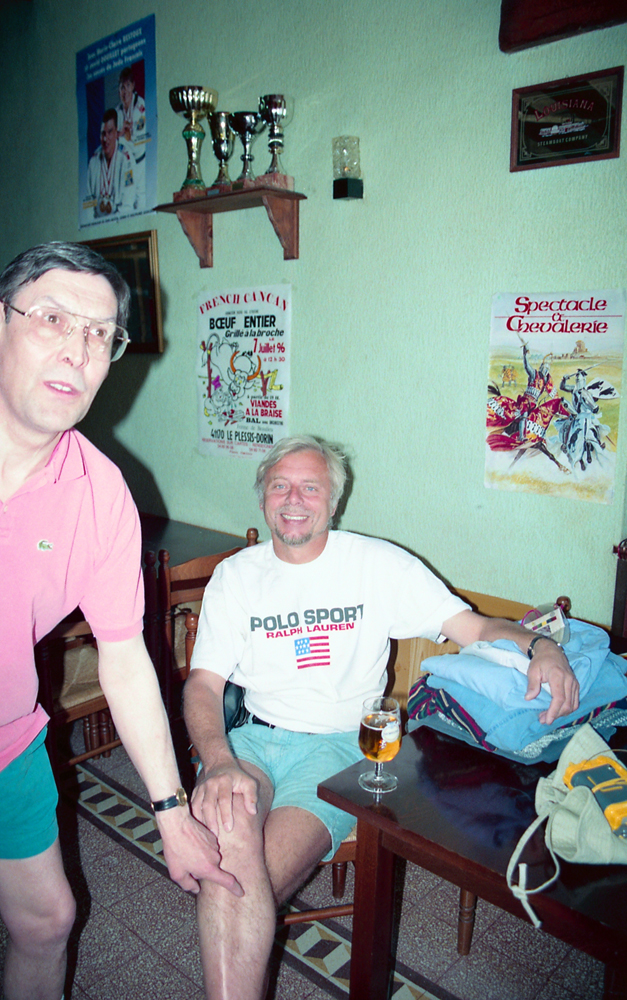 After enjoying a beer at Le Cheval Blanc, it was time at last to head off for the circuit.  I was fairly happy about the time situation as, I suppose, it was no later than 11.30 a.m. by the time we departed.  Things were therefore looking good for what could be our earliest arrival ever at Le Mans!   The journey from Le Grand-Lucé is a relatively short one, no more than about 25 minutes, which makes it such an ideal stopping-off point, particularly so for those who wish to sleep on Saturday night.  Although I've never been able to understand why anyone would want to miss several hours of the race at night (the best time, after all), just for the sake of a little bit of sleep, accommodation near the circuit on Saturday night is difficult to find and Ian clearly did well, not only to find Le Cheval Blanc, but to nurture our relationship there! 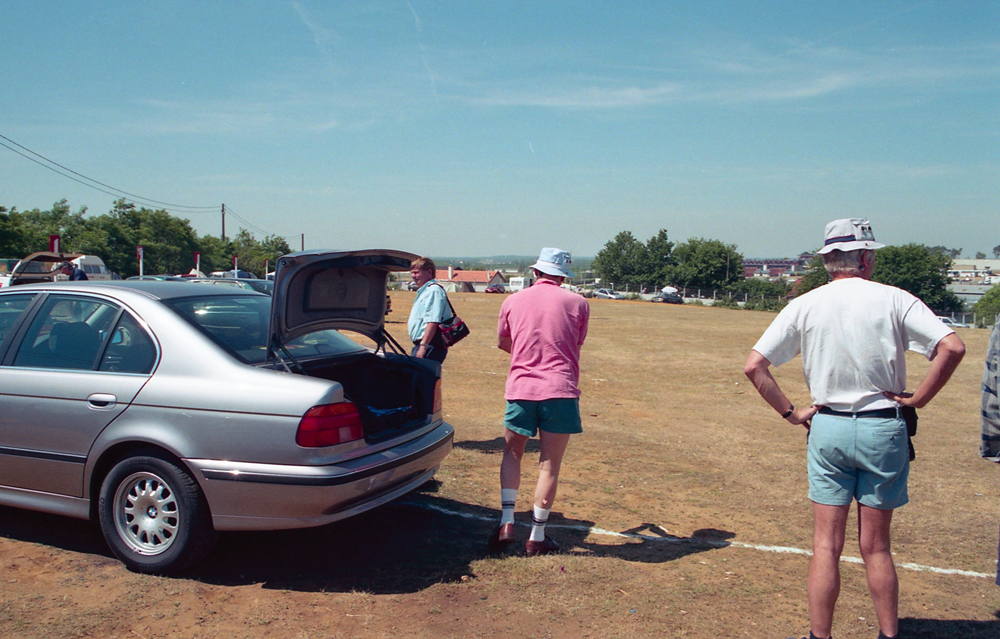 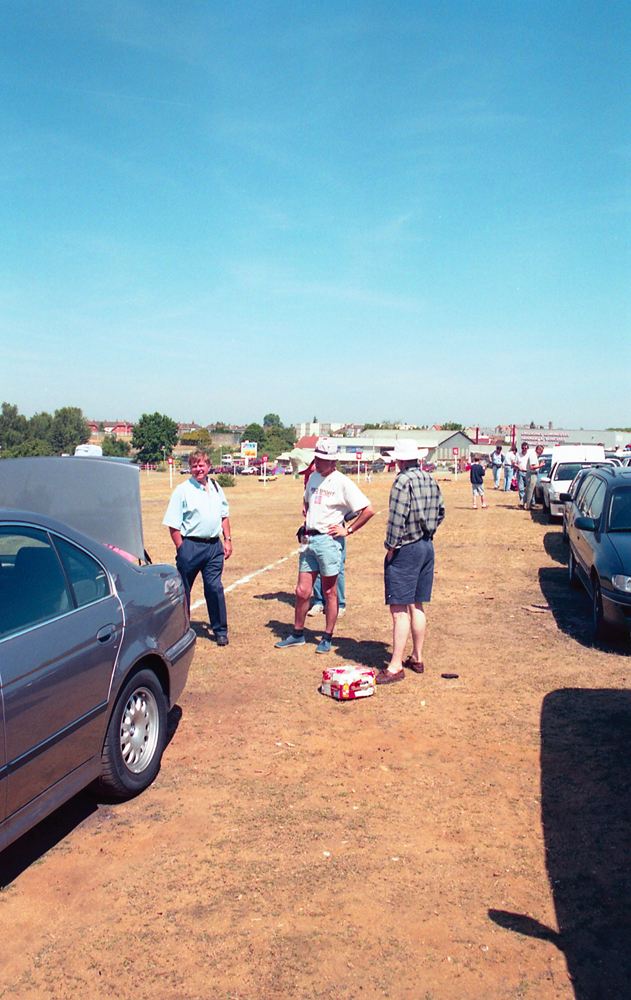 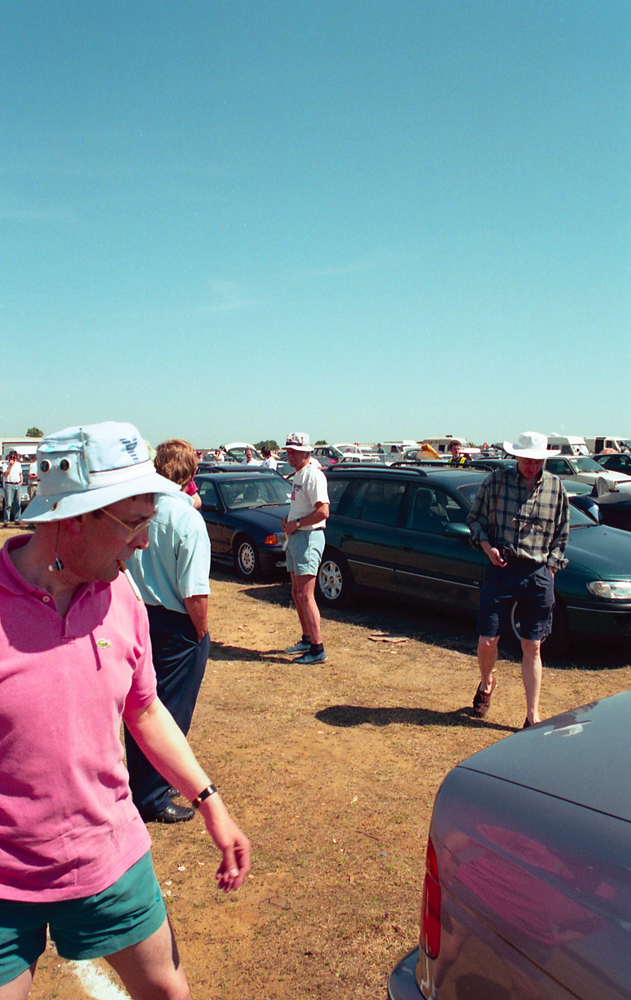 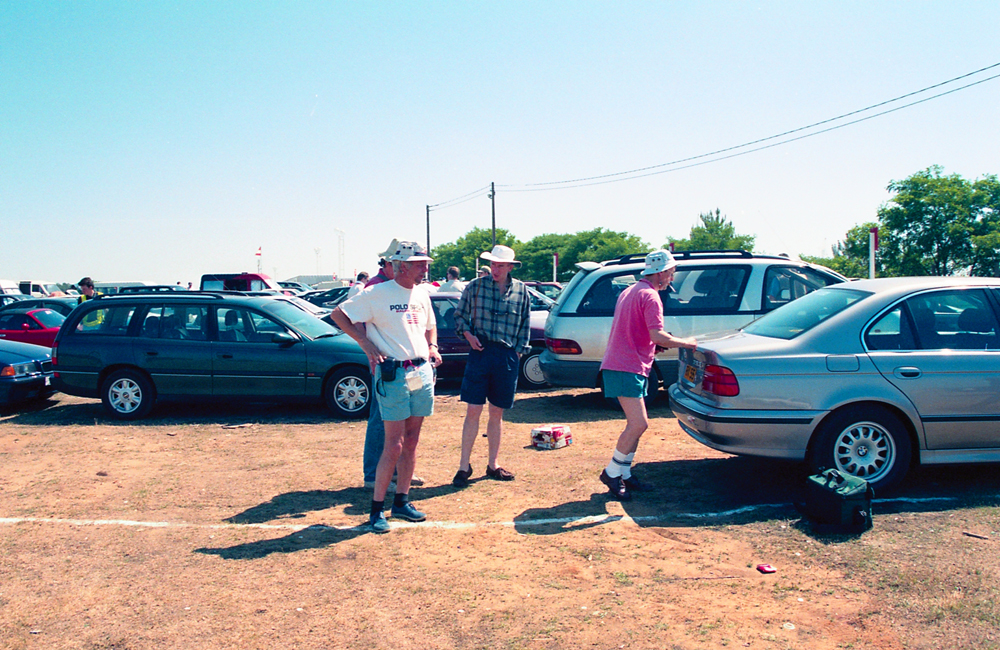 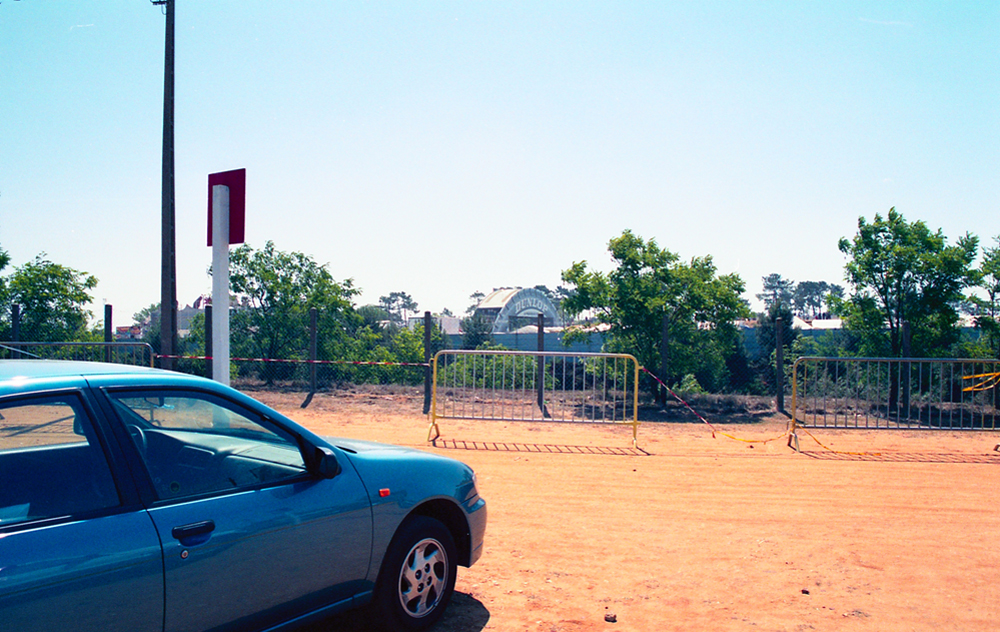 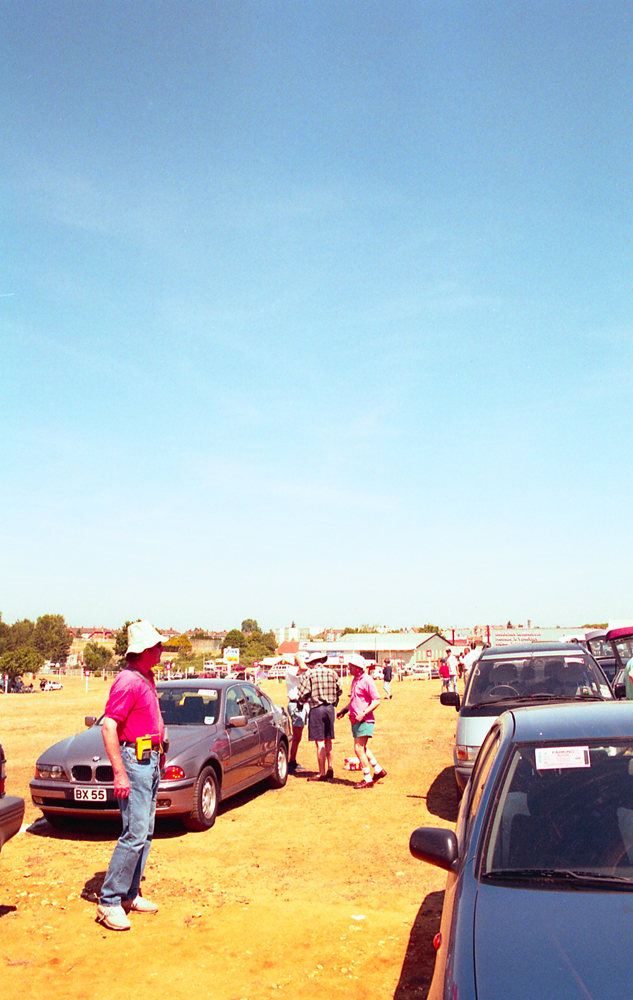 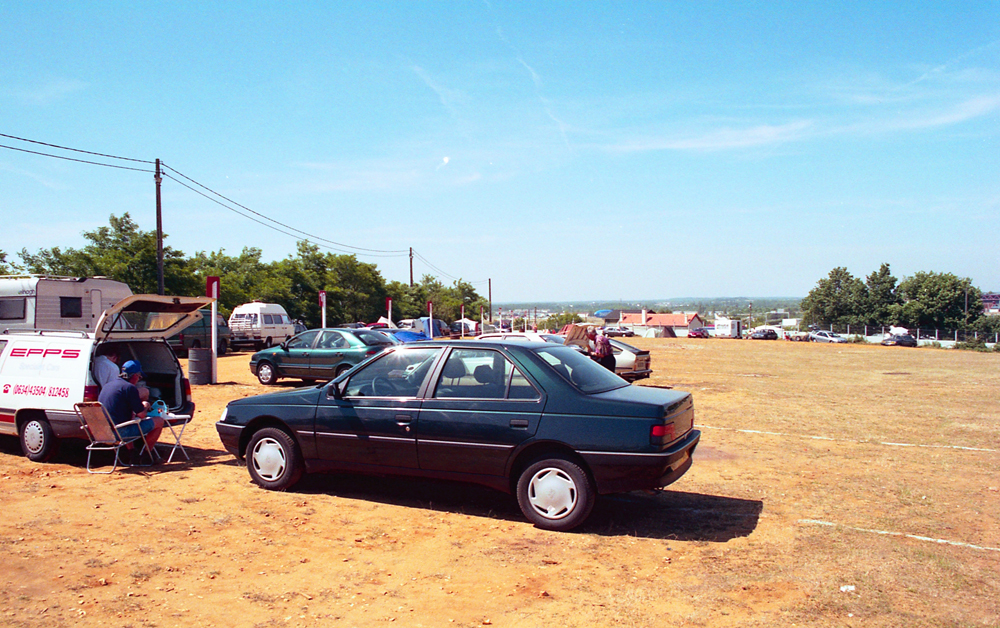 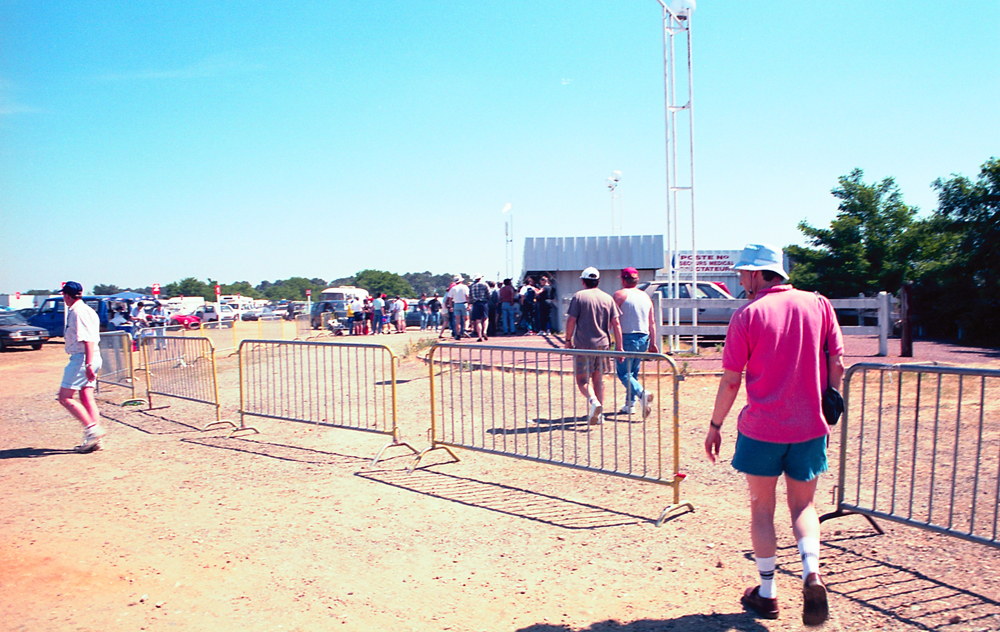 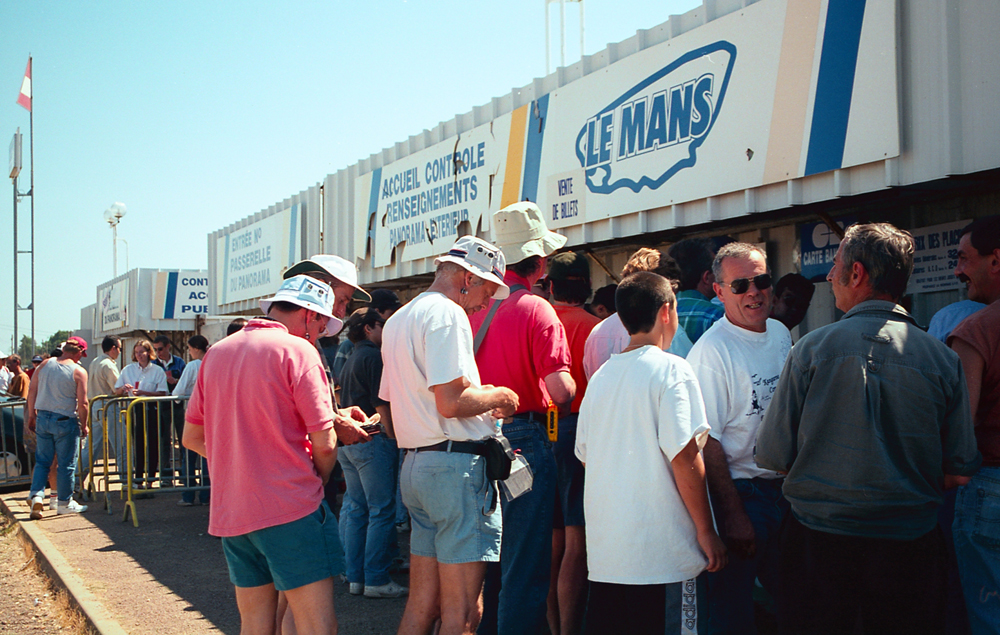 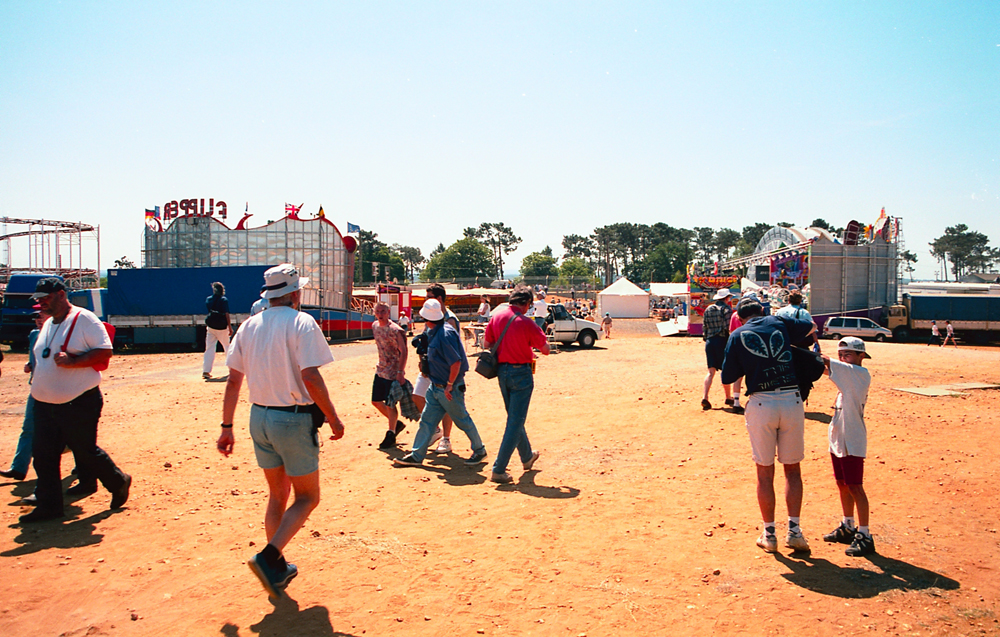 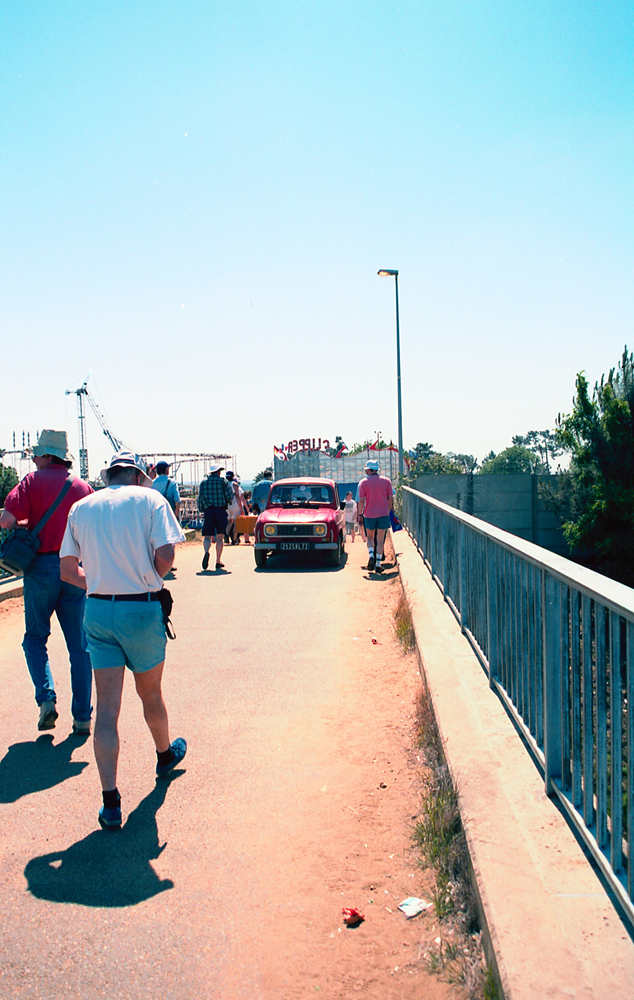 Before long, we were back on very familiar territory and approached the garages (the car parks), taking the long road down to the garage rouge, which runs parallel to the section of the track between the Dunlop Bridge and the Esses.  I purchased Martyn's garage rouge ticket and we headed into the car park.   We had some difficulty with the car park stewards as they seemed to want to put us in a parking place that we could never have got out of, however we finally managed to park the two cars close to each other.    At this point in time, I was determined to take some shots of the boys getting ready to go into the circuit itself.  The combination of shorts and knees, and a variety of sunhats (some with radios), was really quite amusing!   Before heading into the circuit itself, we all paused to splash on some suncream.  It was now just after midday and was very hot.  There was little doubt that the craned necks would suffer on the tribunes without some kind of sun protection.  In fact, as you'll find out later, I wished that I had ferreted around in my bag for some suncream, instead of borrowing some of Martyn's.  The hats really were essential.  With my increasingly balding pate, I don't know what I would have done without mine.

What a time this was!  There is nothing to compare with the initial arrival in the garage rouge each year.  In 1996, it was perfect.  A friendly, close-knit group, brilliant sunshine, none of the occasional after-effects of over-indulgence on the Friday night, everyone was in very fine fettle indeed.  And here we were, once again, having arrived at the shrine of sports car racing (of any motor racing, come to that), with over twenty-four hours of sheer pleasure to be enjoyed.  Although I don't expect anyone else to understand what I mean by it, for me, this almost shameful and hedonistic feeling literally pours out of the photographs even as I write this, eight weeks after the event.  Of all the moments that I look forward to at Le Mans each year, this has to be one of the most memorable of them all.  And the race hadn't even started yet!   Our preparations done, we headed off to purchase our enceintes generales for the race.  The price had gone up a bit since my first visit in 1986, but at 320 francs (about £43.00 on the 1996 exchange rate), I still regard this as incredibly good value for an entire motor racing weekend.  Just compare that with the £100.00 plus which is likely to be charged at the British Grand Prix - daylight robbery for a race lasting an hour and a half!

Once into the circuit, the senses were assaulted as always by those familiar sights, sounds and smells.  The near-orange sand providing both carpet and backdrop to the scene; the first fun-fair rides, largely empty at present, but which would be full by midnight.  That famous Dunlop Bridge in the background, together with the stalls ranging from the obvious, such as t-shirts and radio hats to the more exotic, like African carvings and cheap and nasty jewelery.    The sounds, well, thousands of animated voices coupling with the tinkling of empty beer bottles rolling down the concrete tribunes, soon to be replaced by the grind of broken glass on sand.  The booming tones of the French commentators, unmistakably part of the pre-race atmosphere.  I struggle understand much of what is being said, but it certainly wouldn't be the same without it!    And the smells?  Well, we are thinking of the food stalls, of course.  From the ubiquitous merguez to frites, frites and more frites!  Horse steaks barbecuing alongside bursting saucisse; brochettes and sandwiches; burgers in buns.  For the more sophisticated palate, beer and chips may be exchanged for champagne and Grand Marnier crepes.  Le Mans has it all, quite literally.   From differing viewpoints it can be cheap and tacky, sometimes dirty, always crowded, rushing and impatient.  But at the same time, there is a style, a sophistication about this event which can't be matched elsewhere.  It is about as far removed as you could possibly imagine from standing in the pouring rain at Silverstone with a burnt sausage in a stale bun in your hand.  The place has an atmosphere all its own which can't be appreciated at all unless you have been there.  It seeps into every pore and, no matter what the weather or how good or bad the race turns out to be, that atmosphere provides a fix which stays with you for days, weeks and months after the event.  The trick, I suppose, is in making it last a whole year!