The time was marching on and Ian was now keen to return to Le Grand-Lucé to catch up with some breakfast and to see if Jeff, Jim and Alan were up and about yet.  We got back there at about 11.00 am to find only Jeff up and about - Alan and Jim were still in bed!  I took the chance to nip up to Peter’s room for a very quick wash and brush up and a change of t-shirt and most importantly, a change of socks!  Last year of course, I discovered at this same stage of the week-end that I had blistered my feet and changing my socks, whilst it had seemed a good idea at the time, proved to be a very bad one!  Once the air got to my feet, they were agony for the rest of the week-end!  This year however, all appeared to be fine in the foot department - after all, I hadn’t walked nearly as far as I would normally have done during the night.  Thankyou for that, ACO! 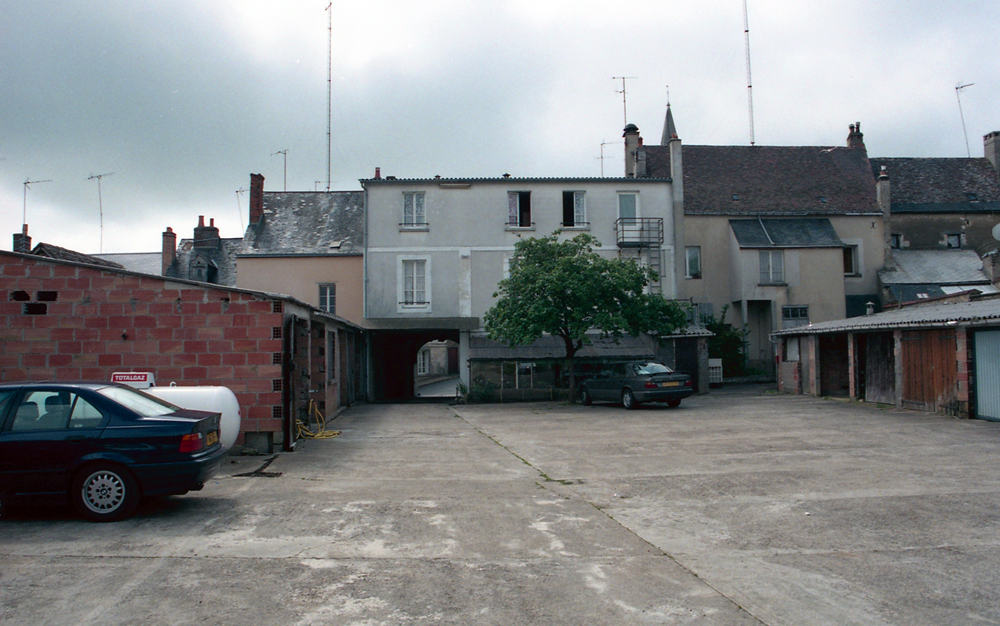 Mildly refreshed I returned to the bar where I was able to snatch a little bread and some of that wonderful quince jelly that I rave about every year!  Alan and Jim surfaced at last and, as usual, I dealt with the bill at Le Cheval Blanc.

It was at this time that Ian proposed a good idea which seemed to go down universally well.  Next year, instead of eating as always at Le Belinois on Saturday night, why didn’t we eat at Le Cheval Blanc instead?  The proprietor was asked if this would be possible, and not surprisingly he saw no reason why not.  (I suspect he was actually rubbing his hands with glee!).  The restaurant sported what appeared to be a decent little menu, with the advantages that the service couldn’t be worse than Le Belinois and it would be considerably cheaper!  I for one was all for the idea, subject to the strict proviso that someone would need to be willing to take me back to the circuit after the meal.  There was no way that I was going to miss at night!

After this discussion we piled back into the cars and made the relatively short journey back to the circuit once again, arriving at about 12.20 pm.  Naturally, my first thought was to give Jeff, Jim and Alan a chance to watch from the new vantage-point (it also gave me another chance to watch from there again myself!), and the three of them borrowed the passes issued to Martyn, Ian and Peter earlier that morning. 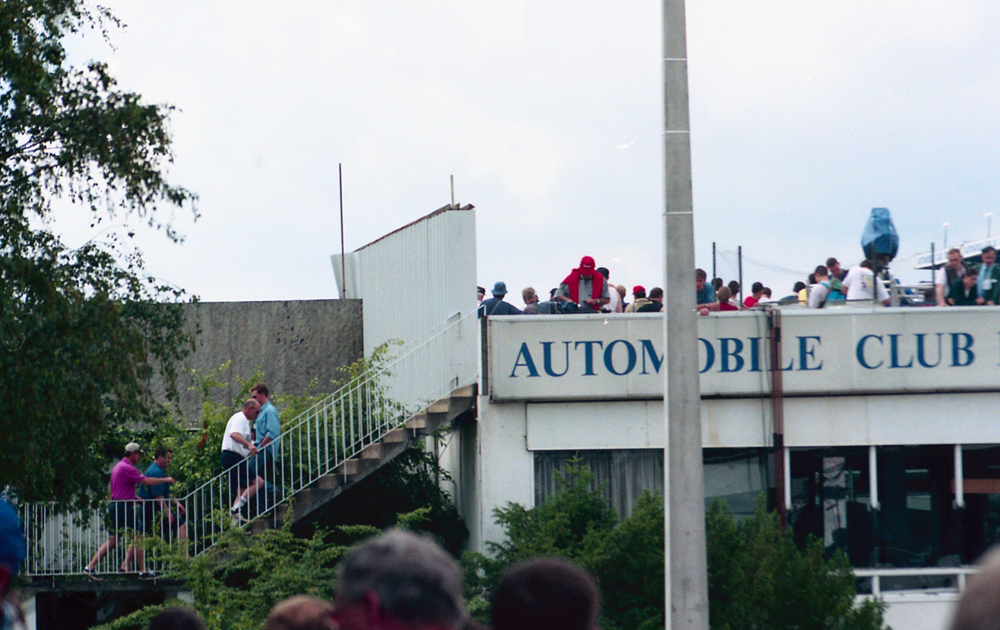 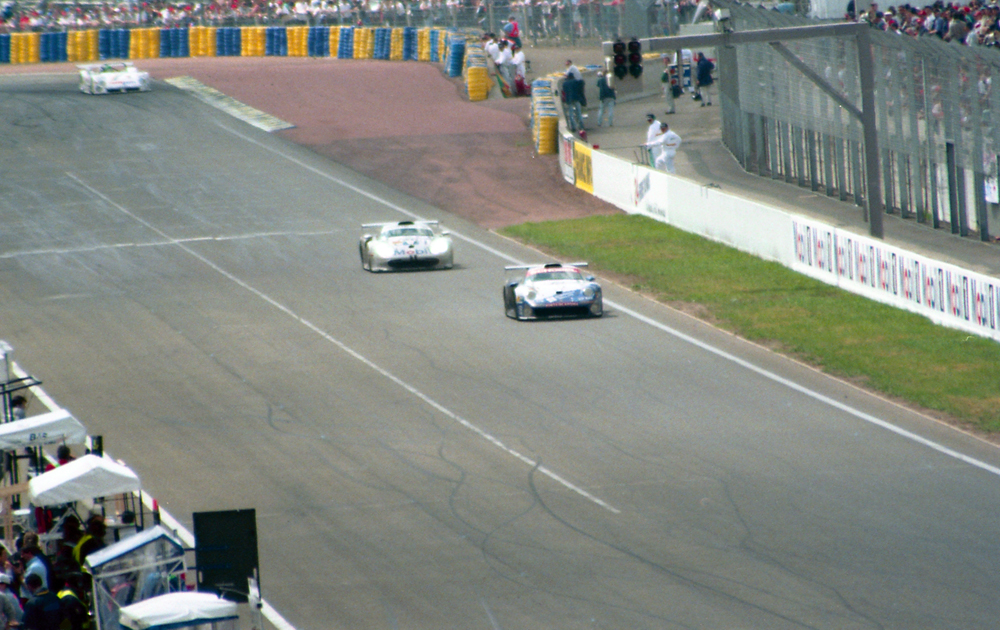 After a short while, it was decided that we should make our plans for the last three or four hours of the race.  I was keen to have a good look in the shops at the back of the Village, including Radio Le Mans, as the last time I walked past them all, it was in the middle of the night and they were all closed!  It was agreed that we would all meet up again at the Mercier champagne stall at 1.00 p.m.  That only gave me 20 minutes or so, but, in that time, I was able to visit Radio Le Mans, the Fina BMW shop (where I obtained stickers and pencil-case tin cars for Toby and James again, as in 1995 and 1996), and the Grand Prix Action marquee, in which there was a Ferrari F1 display car and a display version of the JB Racing Porsche 911 GT1. 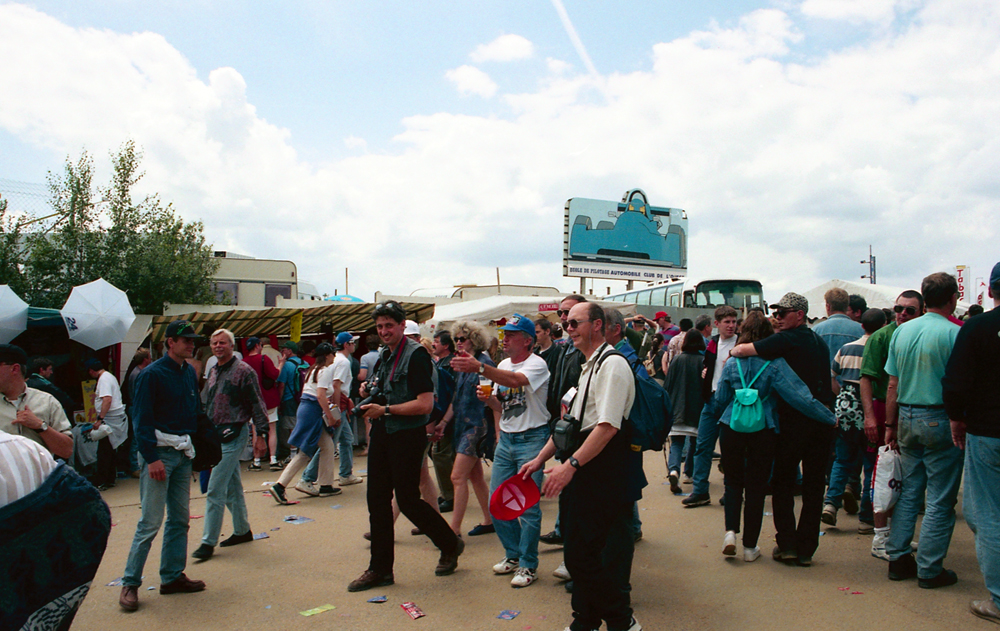 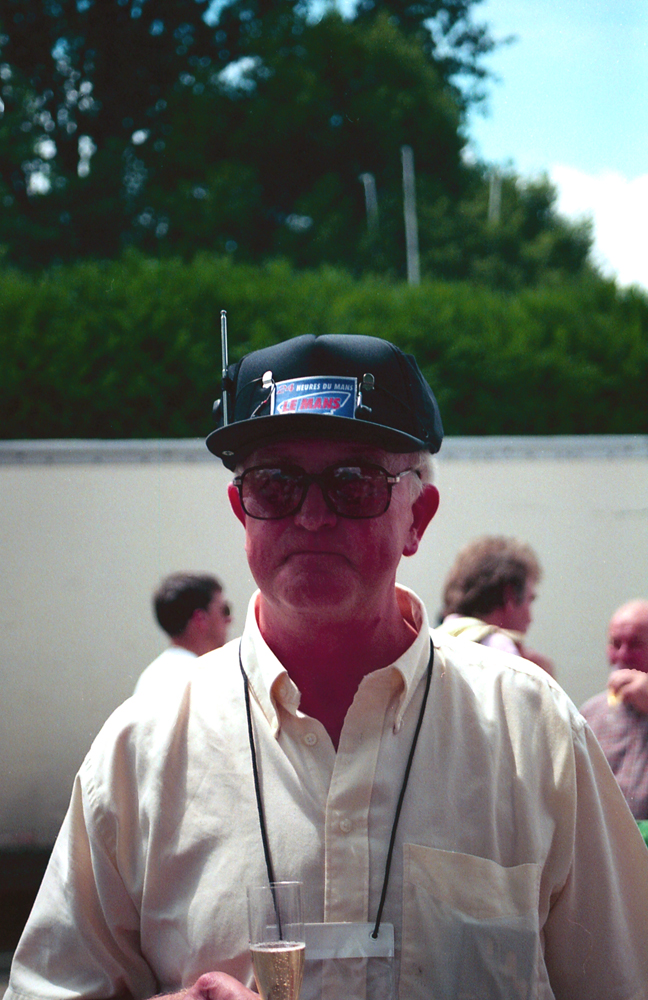 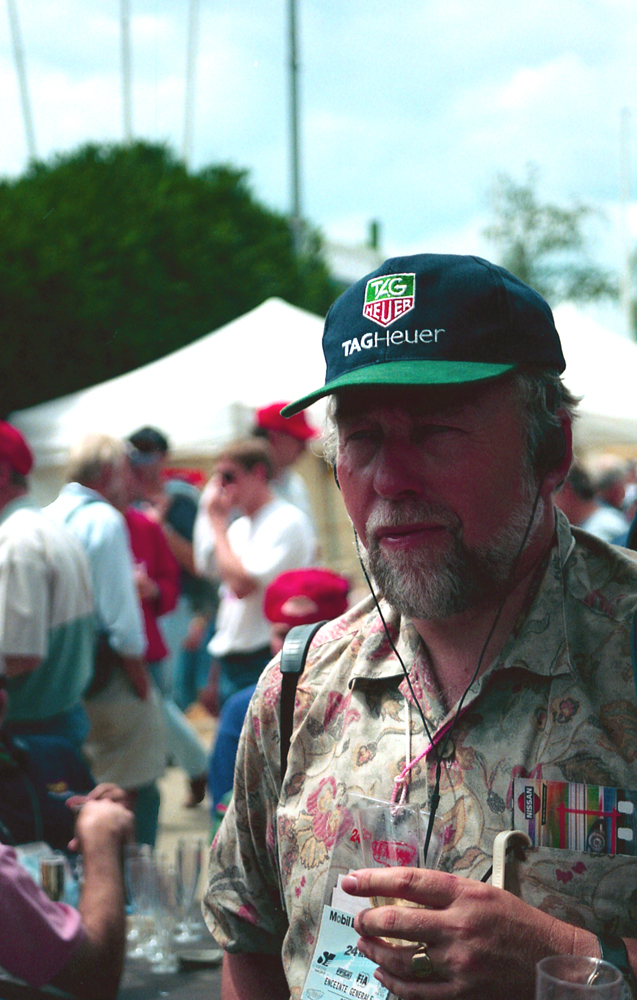 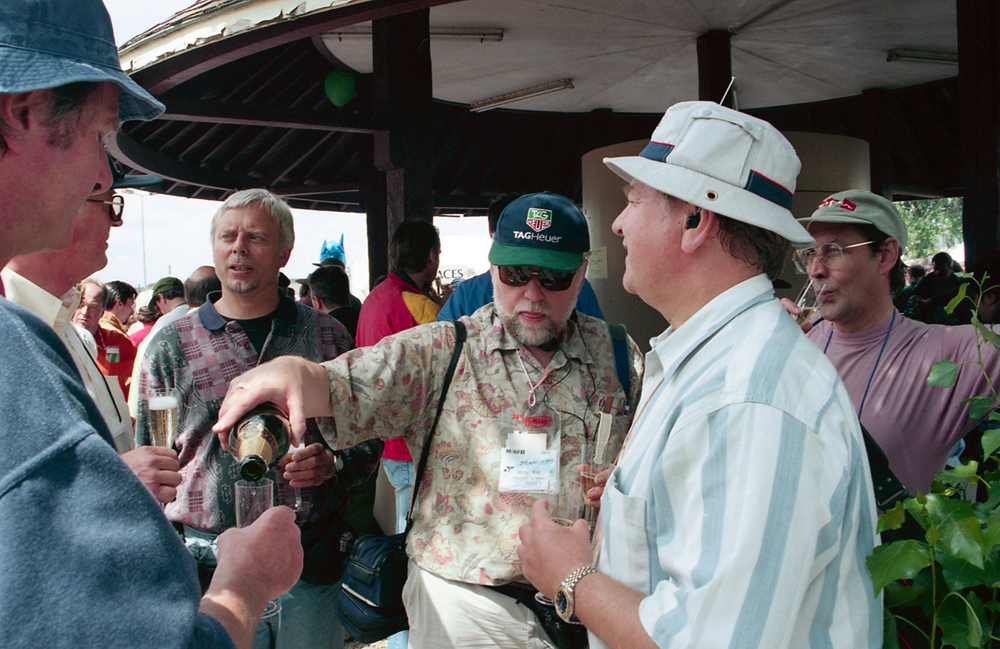 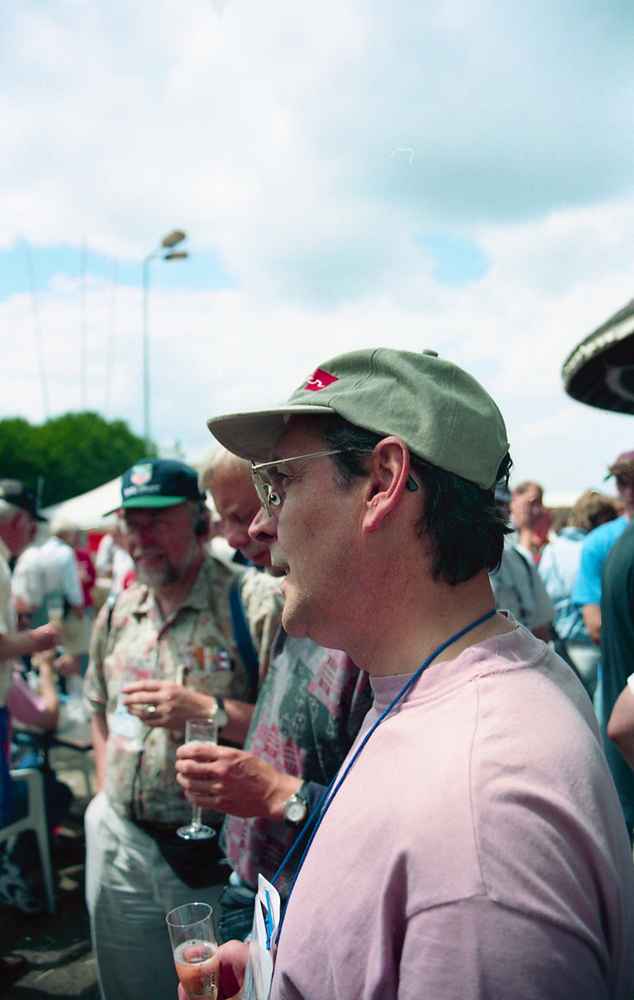 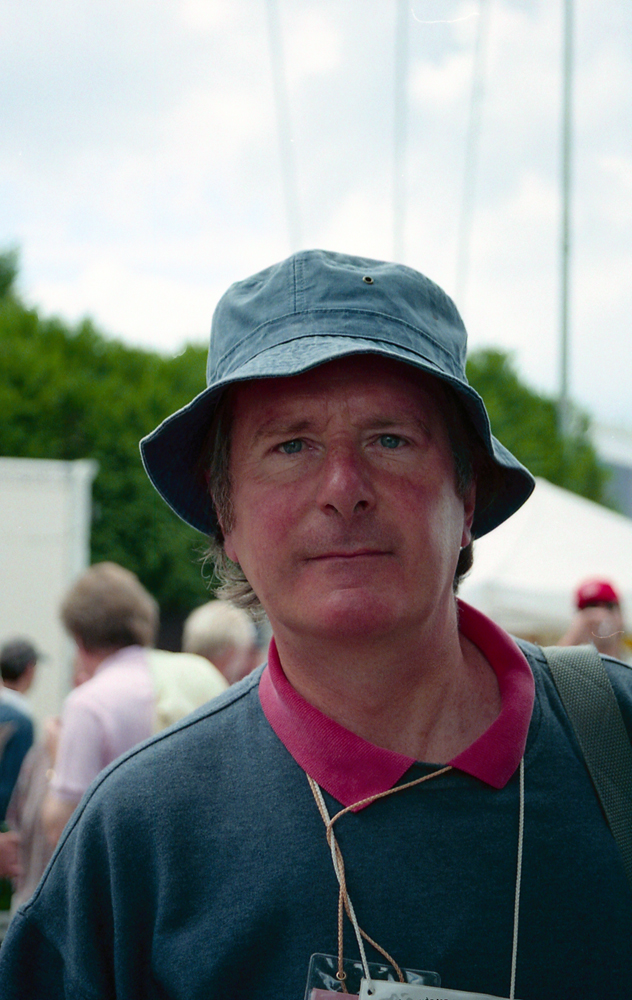 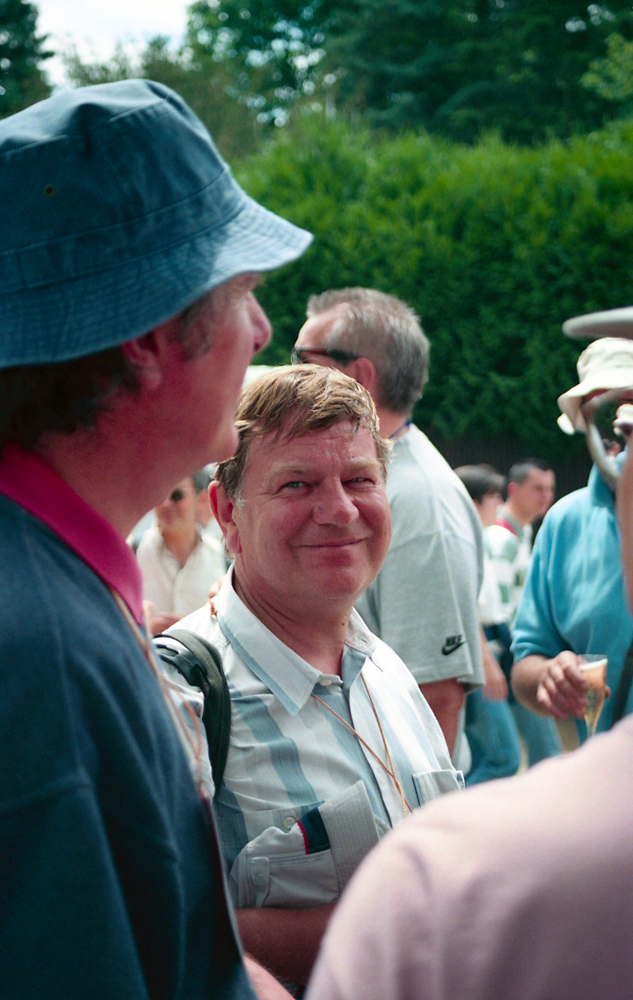 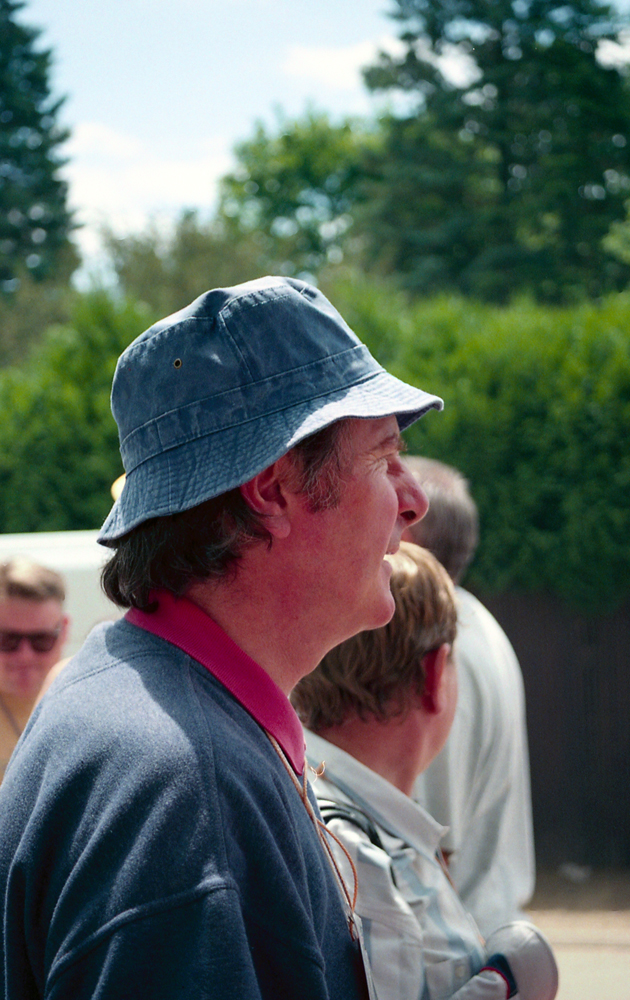 Out of breath, I rushed back a few minutes late for the 1.00 p.m. rendezvous and by the time I reached the stall, the champagne was in full flow, with Peter in the chair.  It was at this time that we made the decision to finish off the race rather differently this year.  We all agreed that, instead of watching the end of the race from the tribunes opposite the pits, we would head out to and Arnage to see the end of the race from there.  As you know, I particularly like to visit the complex of corners around the back of the circuit, and, as time was now quite short, there wouldn’t be time to head back again to the tribunes.

Unfortunately there were those in the group who wanted to go and see the girls!  I feel rather pious saying it, but I gave this sort of thing up as a bad job after my third visit to Le Mans in 1988, and I can say entirely honestly, that I have never been tempted to go back again!  Peter felt the same as I did, as we were both far more keen to keep up with the state of play in the race than being squashed like sardines in the back of a lorry to watch ageing and emaciated French women going through the motions!

We separated at about 1.30 pm and Peter and I hung around on the spectator banking on the outside of the circuit on the run down to the Esses from the .  It was while we were waiting here that we heard of the demise of the leader, the Porsche GT1 driven by Bob Wollek, who shunted his car (in the Porsche Curves, I think).  It wasn’t certain then (and still isn’t now, many months later), whether the broken driveshaft found after the accident was the result or the cause!  One Porsche GT1 down, one to go! 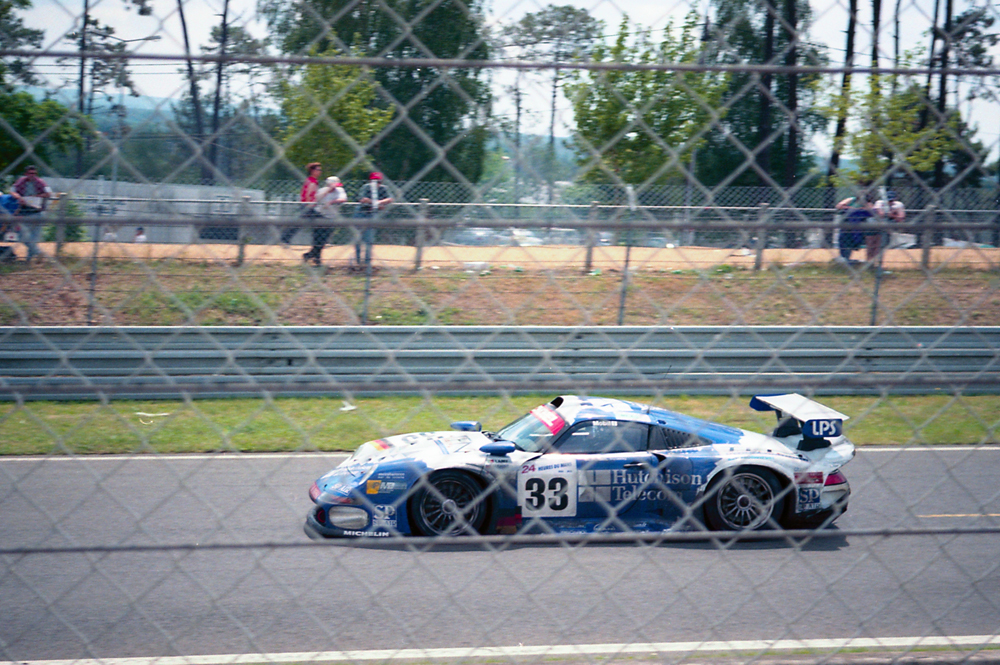 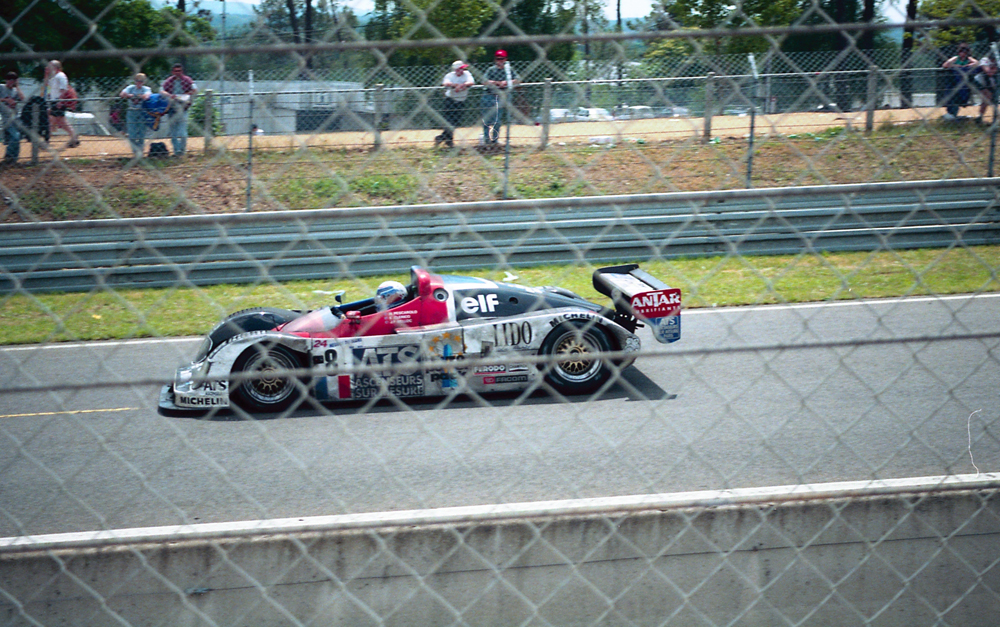 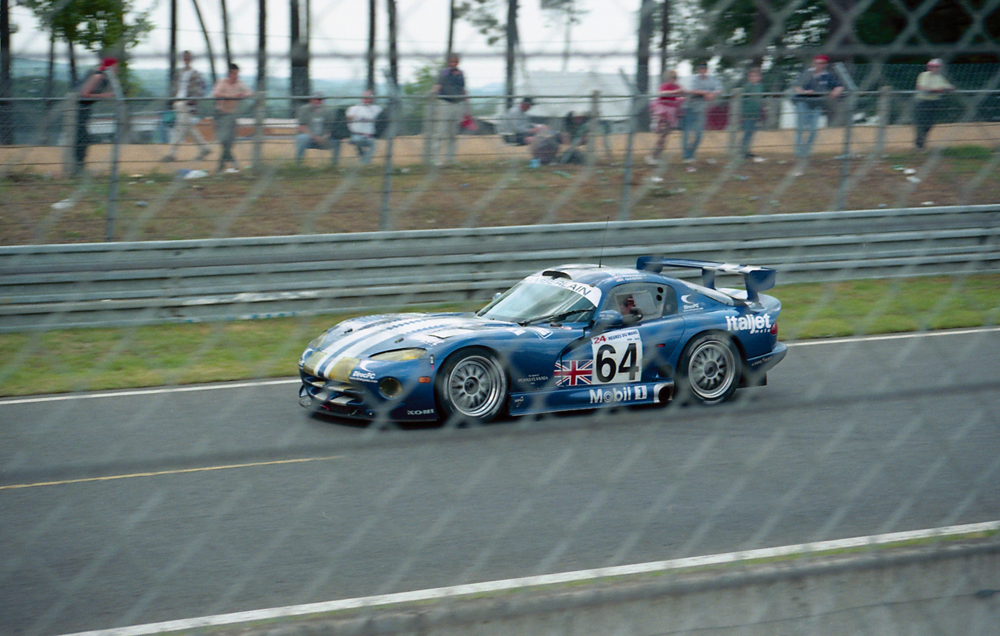 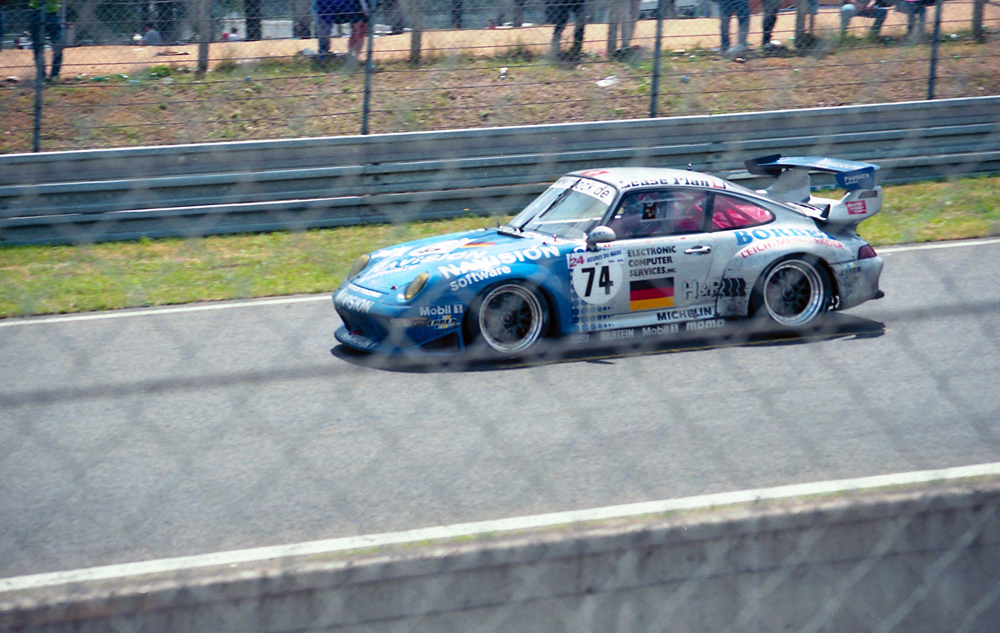 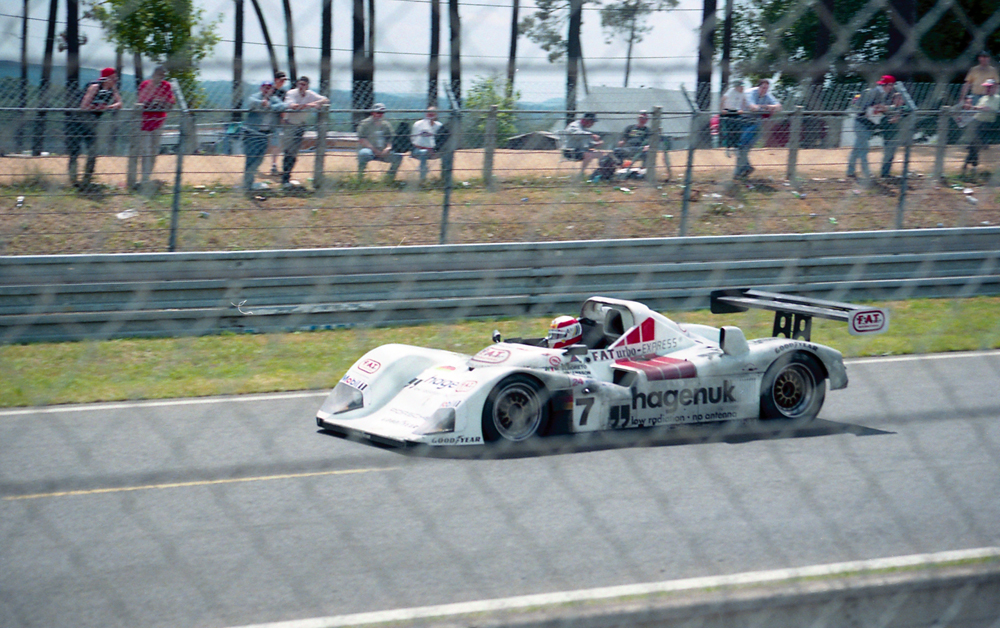 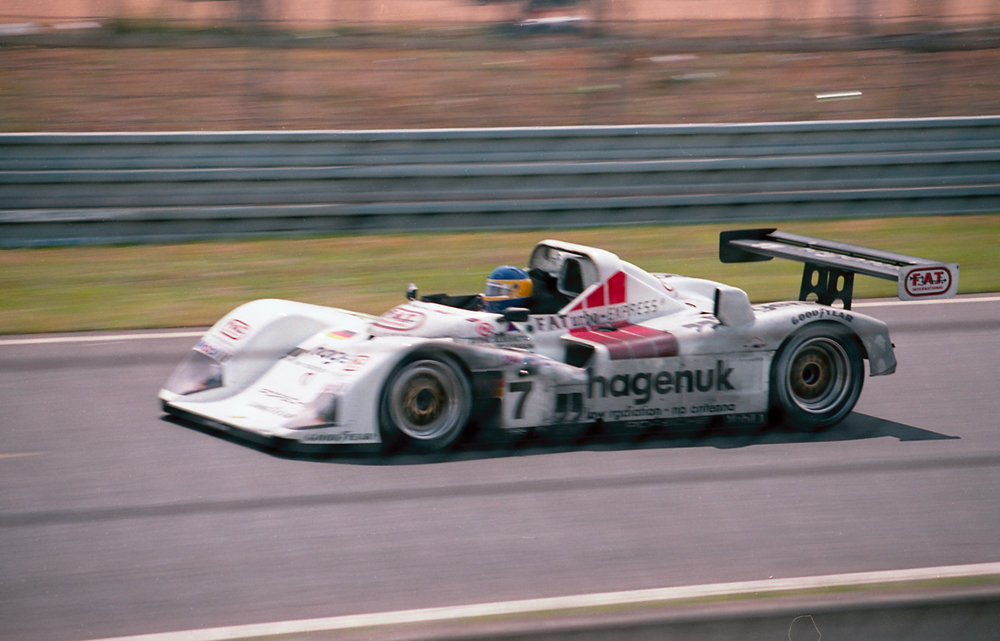 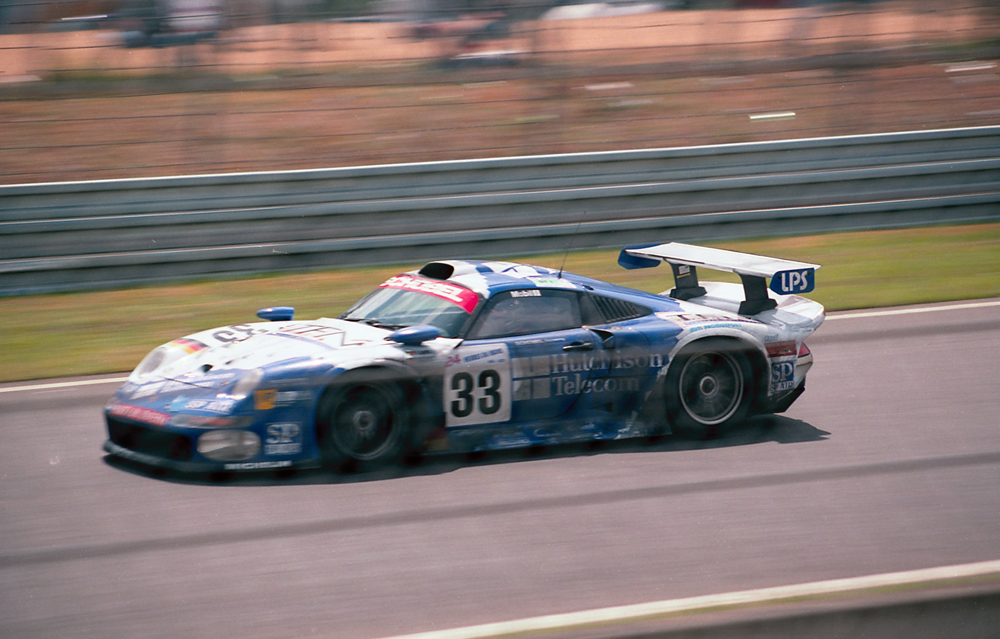 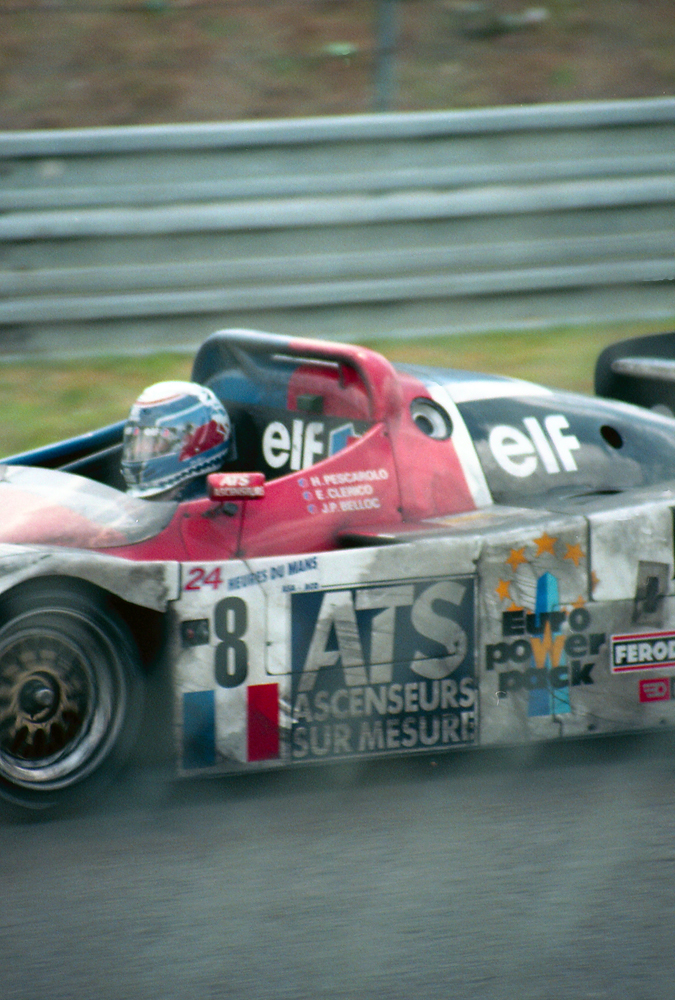