Ominously by this time, the weather had deteriorated significantly.  It hadn't exactly dawned a bright sunny morning (as it did last year), but at least the rain had held off.  During our journey however, the skies rapidly darkened, and it wasn’t long before we were driving into the rain.  It was an inauspicious start to the week-end and we could only hope that having had such a brilliant week-end weatherwise, in 1996, 1997 was not going to be another wet year like 1995! 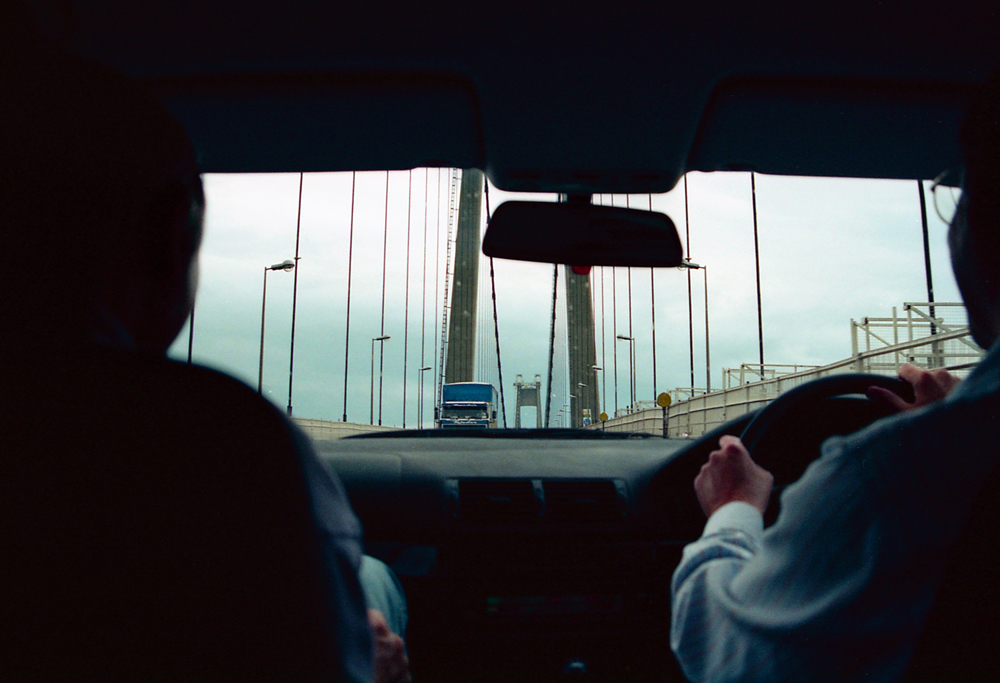 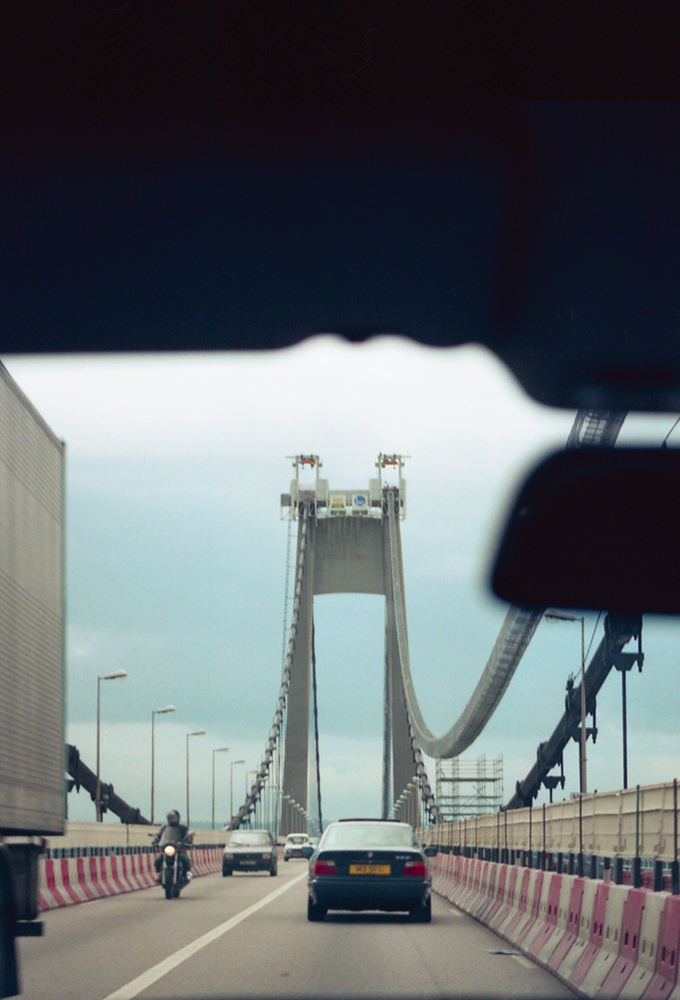 Passing through and Dreux, we reached at 5.20 pm by which time it was raining hard.  After spending quite a long time trying to find somewhere for the two cars to park near to the cathedral (we eventually abandoned the cars, hoping we wouldn’t run into trouble with the local gendarmerie!), we decamped, intending (so I thought), to go in search of a café for a well-earned cup of coffee.

I say we intended to do this because, by the time we found a suitable place for refreshments, we appeared to have lost Martyn and Peter!  Ian, Alan, Jeff, Jim and I had a refreshing cup of coffee (which I really needed, as I was parched and now had quite a headache), and having looked for and waited for Martyn and Peter to join us, we decided to press on for a look around the cathedral, thinking that they might be there already.

The cathedral was magnificent with quite awesome stained glass in every window.  Although I didn’t have my tripod with me, I did take a couple of “zoomed” shots inside the cathedral, one of which came out quite well.  It was pretty dark inside the cathedral of course, and even if Peter and Martyn had been inside, I doubt that we would have spotted them.  It was hard enough keeping a track of Ian, Alan, Jeff and Jim, with whom I had come in... 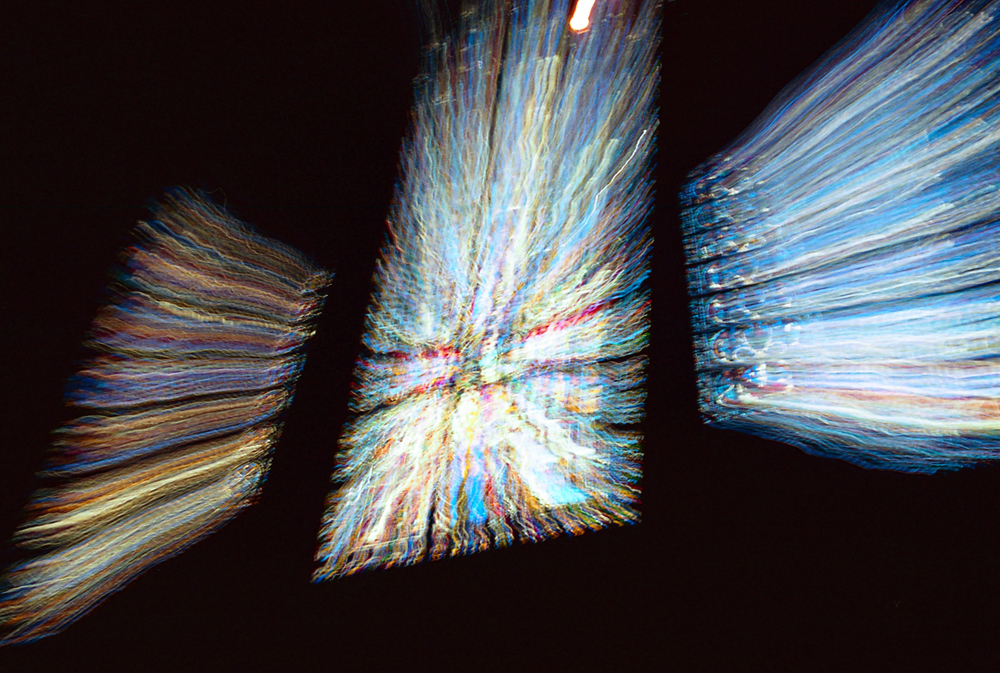 I suppose we left the cathedral after about half an hour, and headed back to the cars, half expecting Peter and Martyn to be waiting there for us.  Unfortunately they weren’t, and we had no idea at all where they were.  We all had a look around for them until we grew tired of waiting.  I hung around in the rain (having borrowed a brolly from the boot of Ian’s car).  After the best part of half an hour, the errant pair appeared, wandering down the side street we had originally wandered up, when we were looking for somewhere to have a cup of coffee.

Why Peter and Martyn became separated from us, I have no idea, but, instead of going for a cup of coffee first, they decided to press straight on to the cathedral.  I suspect that they were leaving the cathedral just as we entered it.  They then went and had their cup of coffee, although I think that they probably took quite a bit longer than we had, both to visit the cathedral and have a drink.

We finally got away from , still in the pouring rain, at about 6.30 pm, in the knowledge that we still had a fair journey on to Vendôme.  In fact, having passed through Vitray en Beauce on route, we reached the outskirts of Vendôme at about 7.45 pm. It had been a long journey, and we were all looking forward to settling into our rooms, having a quick wash, and heading down for dinner.  All I could think of was a pastis!

In fact, our arrival at Vendôme brought with it better news on the weather front.  It had finally stopped raining!  Although there was obviously no sunshine at this time, it was good to see the back of the rain for the moment – if only the dry weather would last!

It was time to take our bags into the Auberge de la Madeleine, which not surprisingly had not changed at all since last year’s visit.  Peter and I had agreed in advance to share a room (the same room to which I was summoned last year to observe through the window a stuffed cockerel in the garden!).  Sadly, we would not be taking our dinner in the evening sunshine in the garden this year, but, nevertheless, I was looking forward to a good meal! 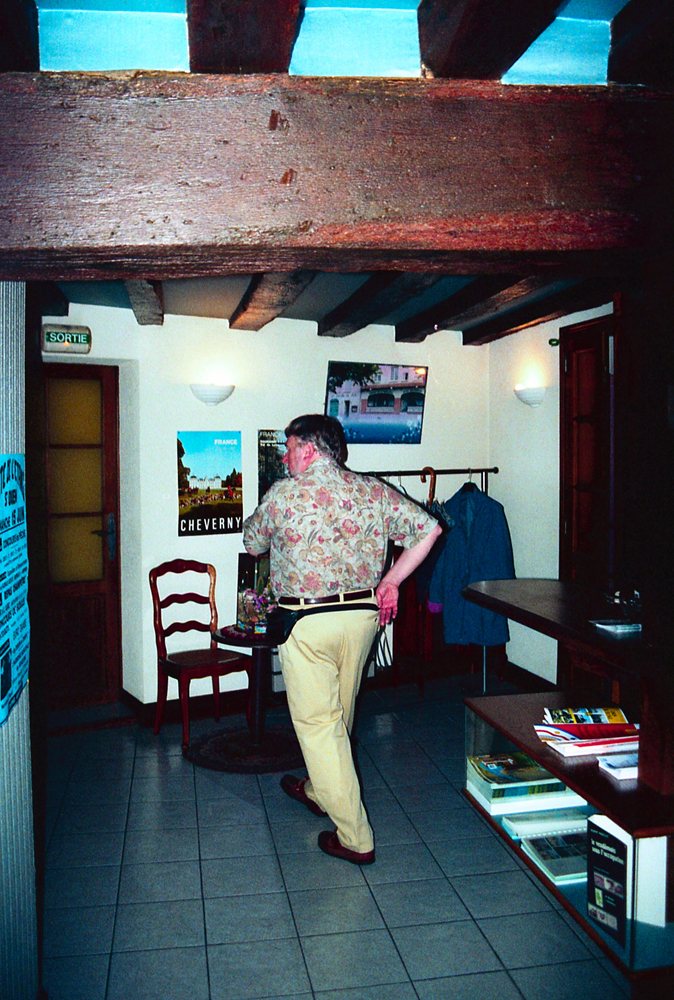 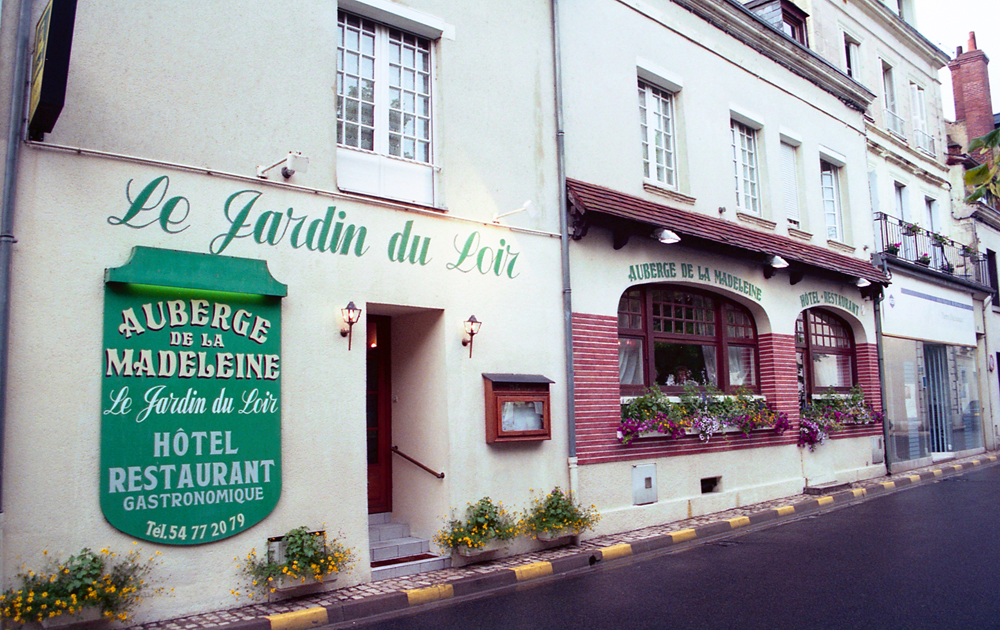 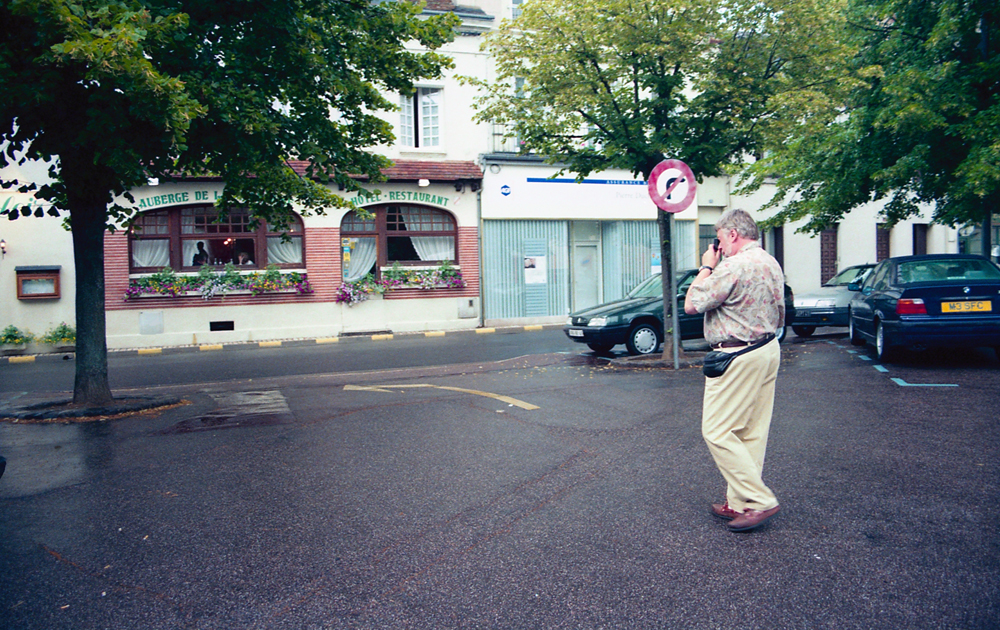 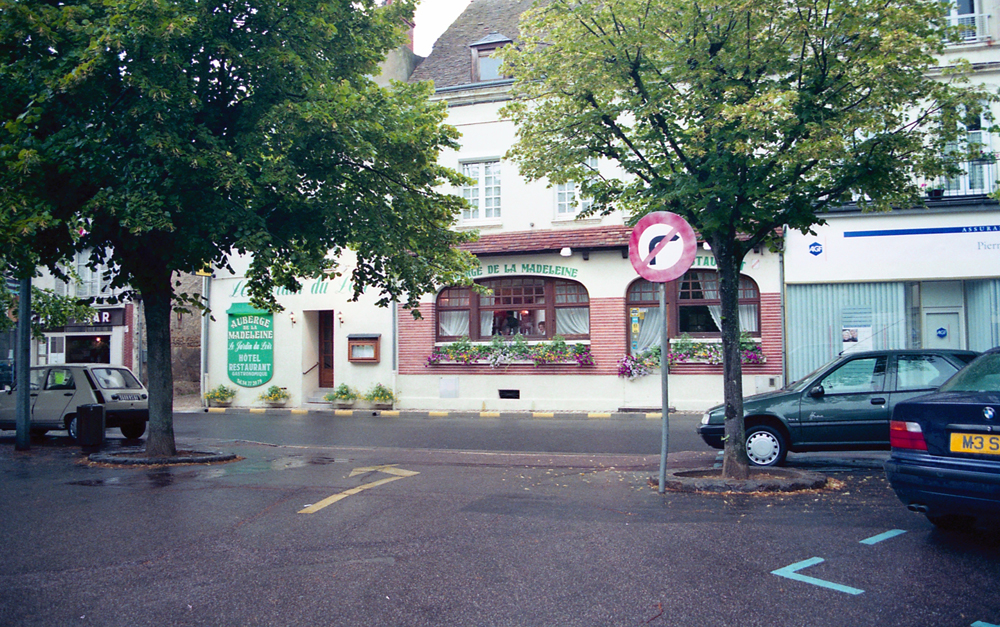 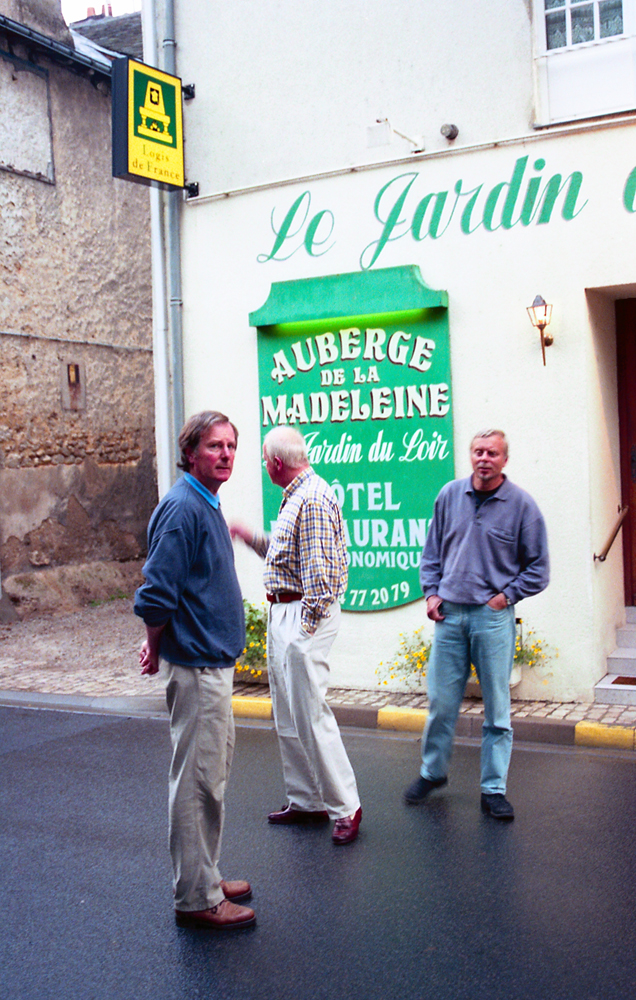 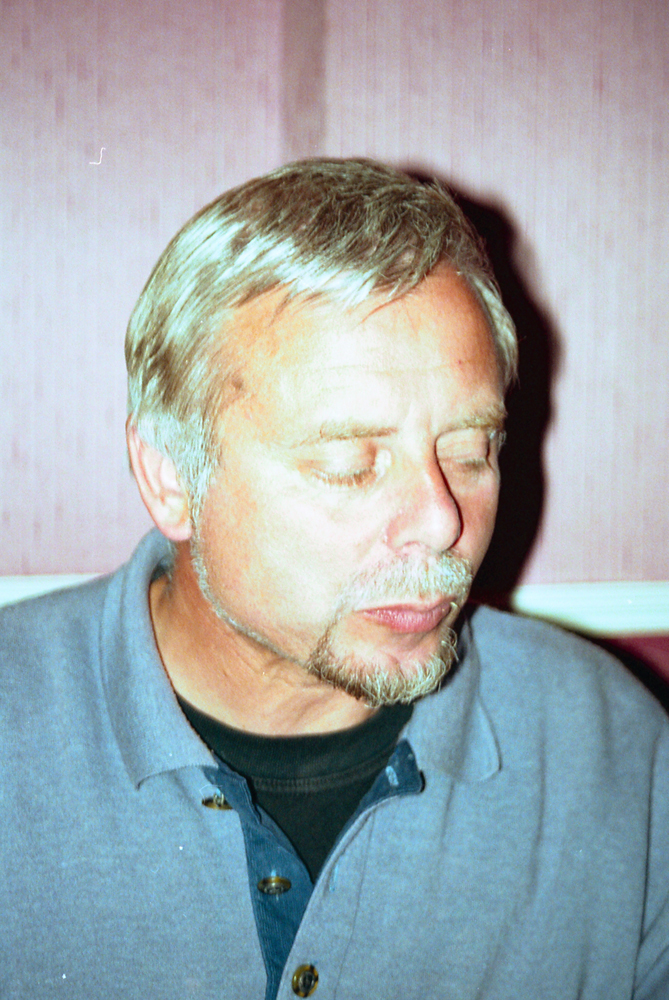 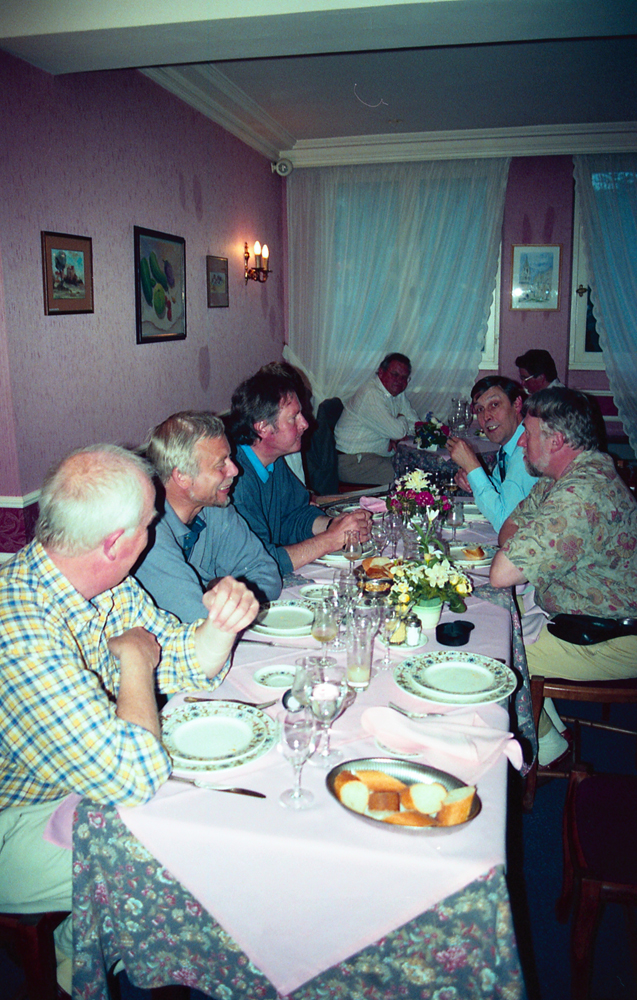 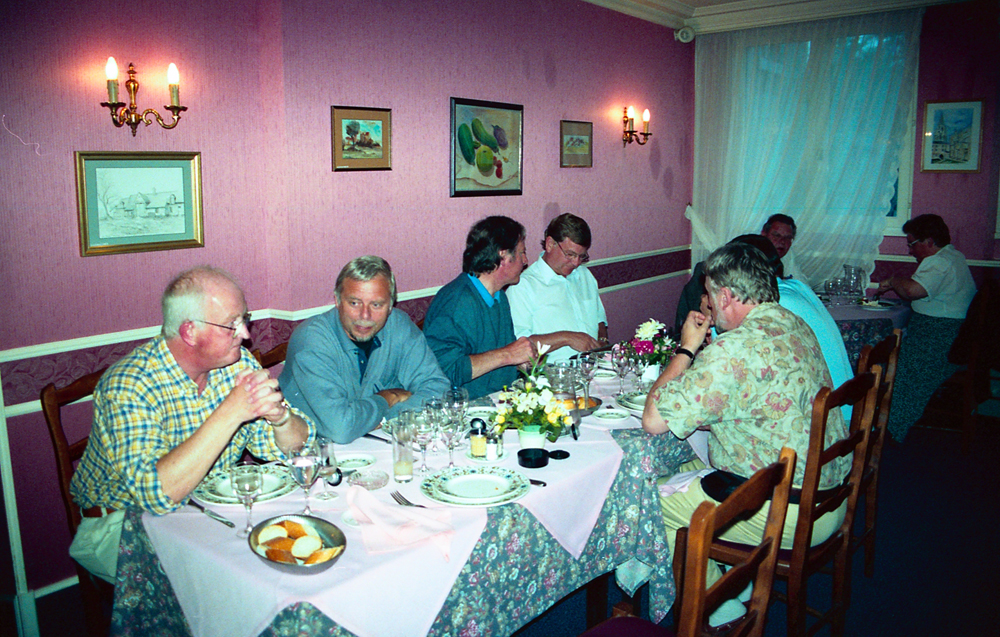 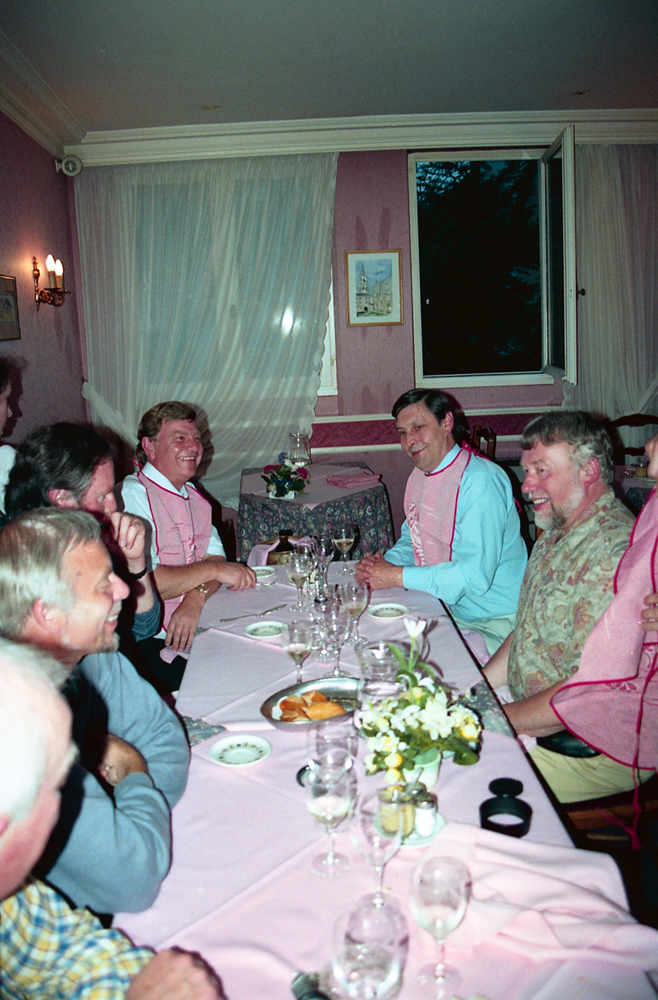 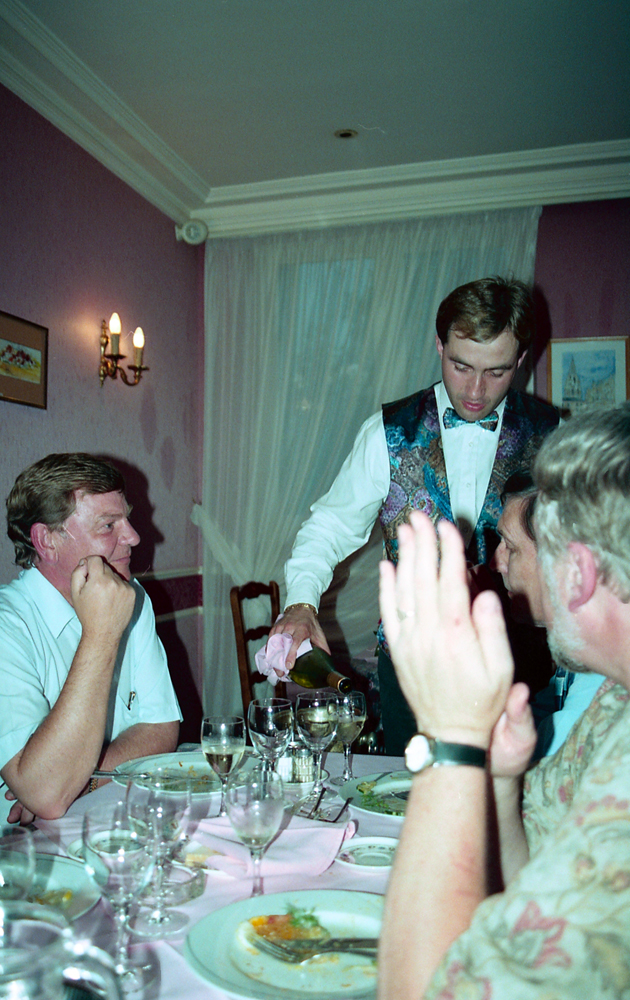 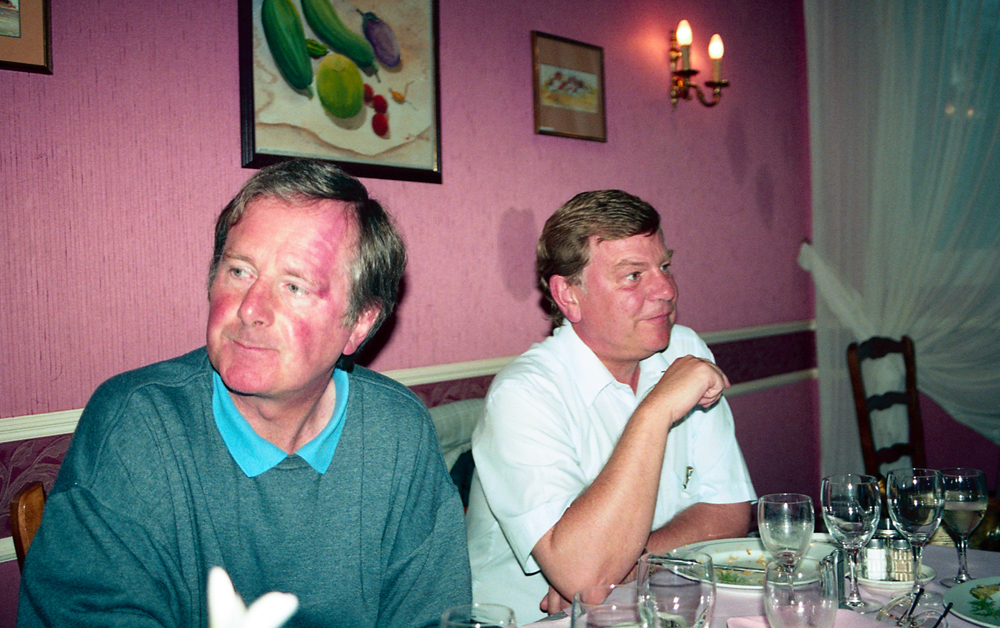 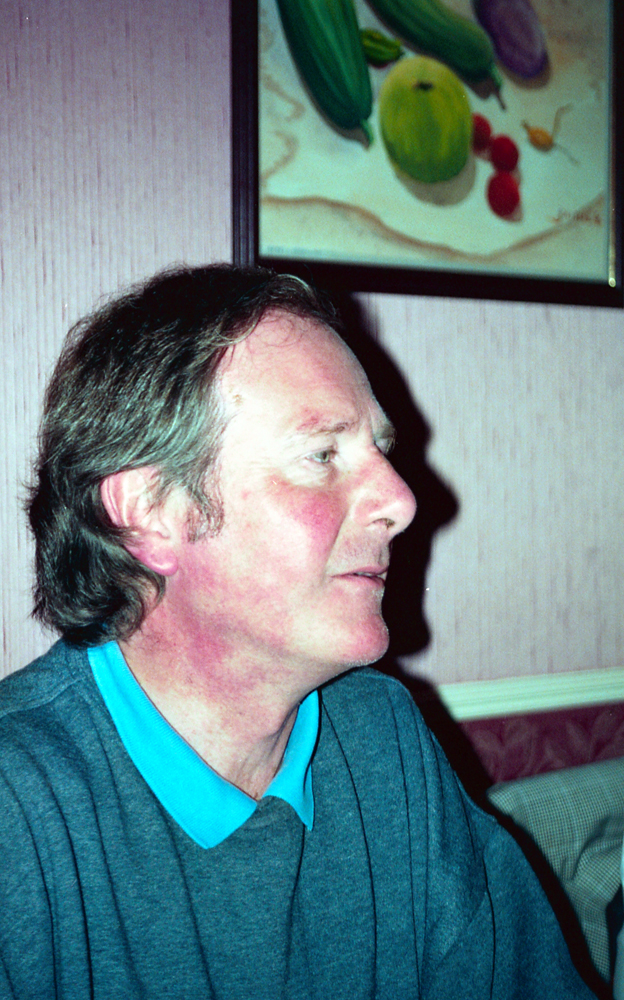 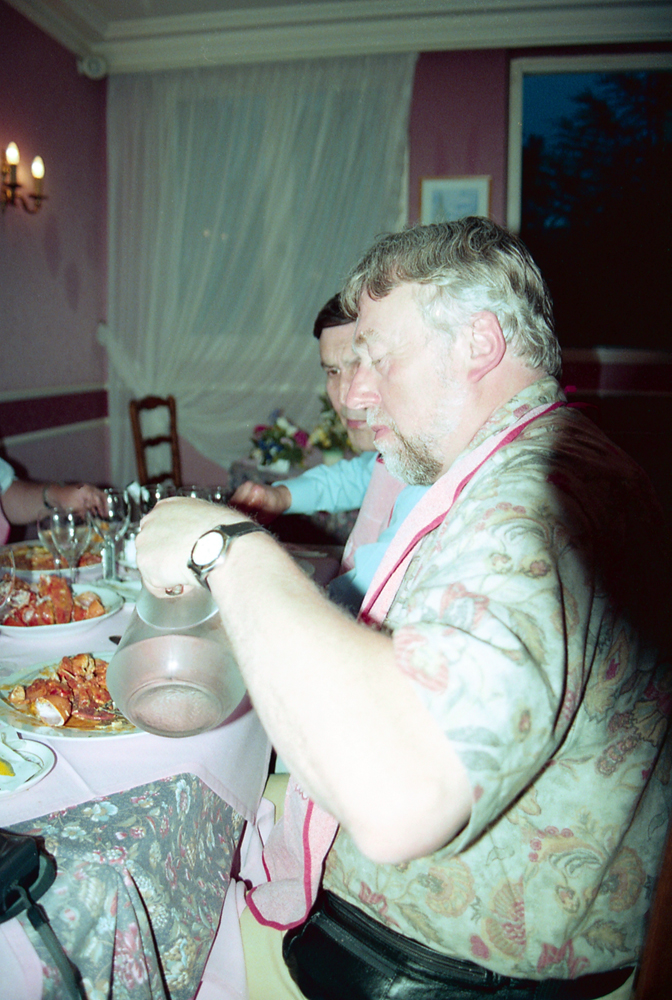 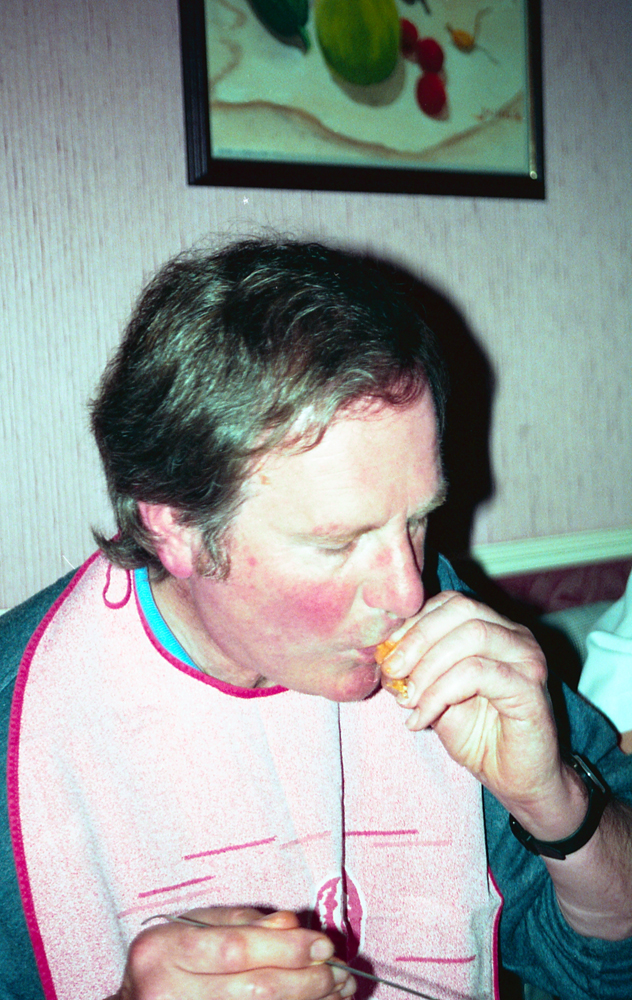 We didn’t have time to wander down the town for a beer this year, so we had aperitifs at the table in the restaurant.  Our waiter was the same friendly and helpful chap who had waited upon us last year.  As is so often the case in , he seemed to positively relish the opportunity to practice his already very good English!

I started my meal with fois gras, the first time I had eaten it.  I have to admit that, notwithstanding the knowledge of the manner in which it is produced, it was absolutely delicious – the taste still lingers with me as I write this part of the chapter, over three months later.  After that excellent start, for the sake of consistency, if nothing else, we all decided to have the same fish course – lobster in a whiskey sauce, and that was where the fun began! 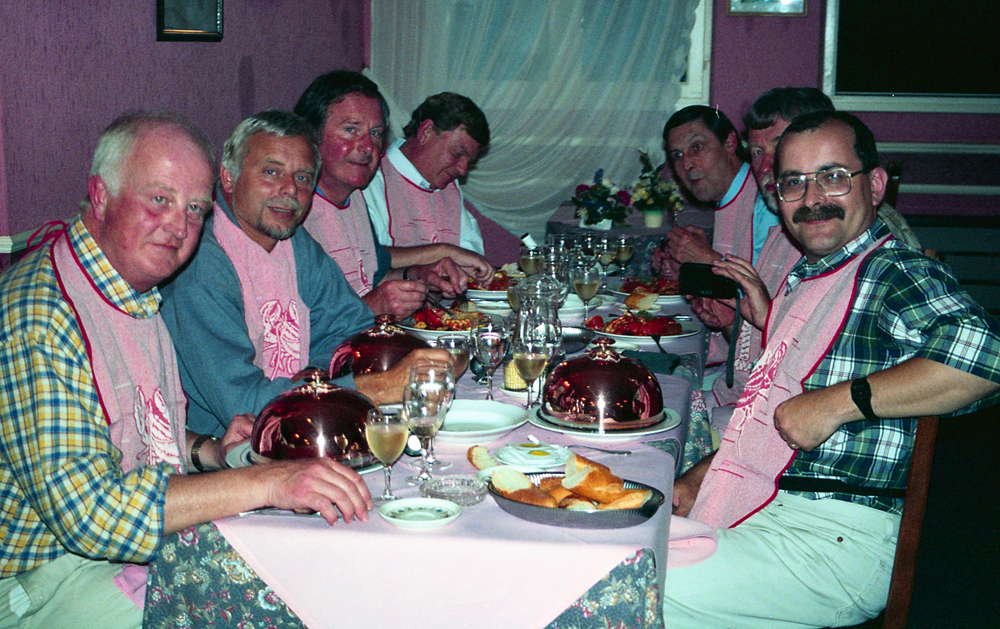 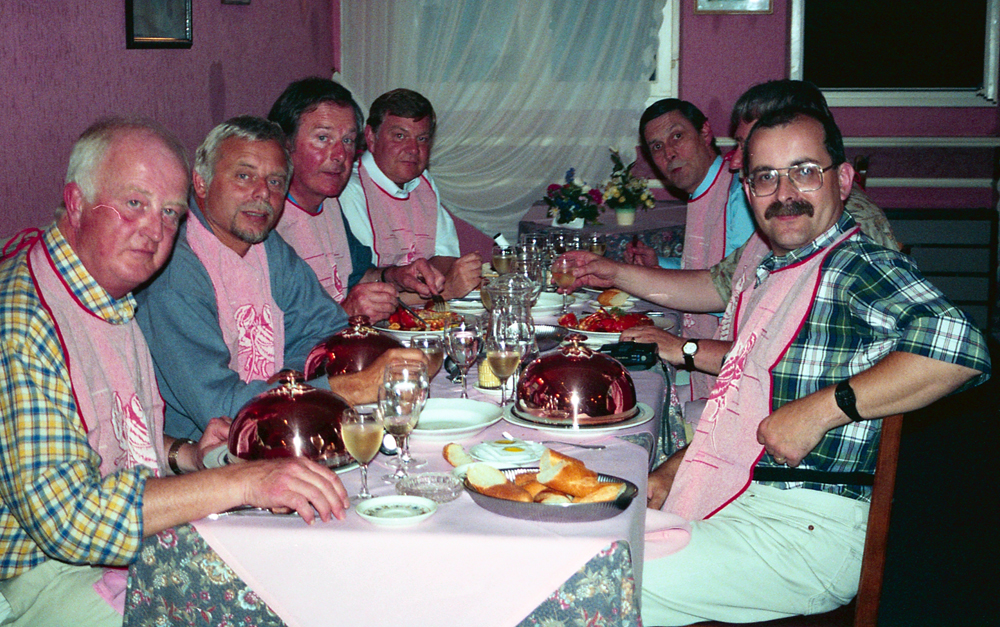 Our waiter appeared with bibs for us all, which we were clearly obliged to wear.  I think it would have been regarded as quite an insult, had anyone refused!  Inevitably, the sight of the seven Tourists dressed in our pink bibs was too good a photo opportunity to miss, and not only did I take one or two shots myself, the waiter was only too willing to assist me (and others) by taking photographs of us all.  There was thus no escape for yours truly!

After experiencing the lobster, I had to agree that the bibs were essential!  The lobster was delicious, but the bright orange sauce got absolutely everywhere, and wearing white trousers, as I was, they would have been covered in the stuff without the bib!  After the superb lobster came, for me, the lamb, and I rounded the meal off with a creme brulée which was set with dried fruits in it.  It wasn’t quite what I had expected, but was nevertheless very nice and rather different!

I suppose we finished our meal at about 11.45 p.m., and it was decided that we should walk down into the town for a night-cap.  In fact, we stopped at the same hostelry we visited in 1996 (before our meal), which, as it happens, was hosting live music, in the form of an Irish folk evening!  It was very strange to be sitting in the middle of listening to Irish music played by French men and women (and sung in French!).

It was beer for most of the team, although Ian and I couldn't resist a couple of glasses of calvados.  Like me, Ian is very keen on the French apple brandy (it was he who introduced me to it, ten years or so ago!).  The atmosphere was extremely pleasant, the rain had stopped and although everything was still very damp, the music and the drink only served to add to the strong feeling of contentment at the time! 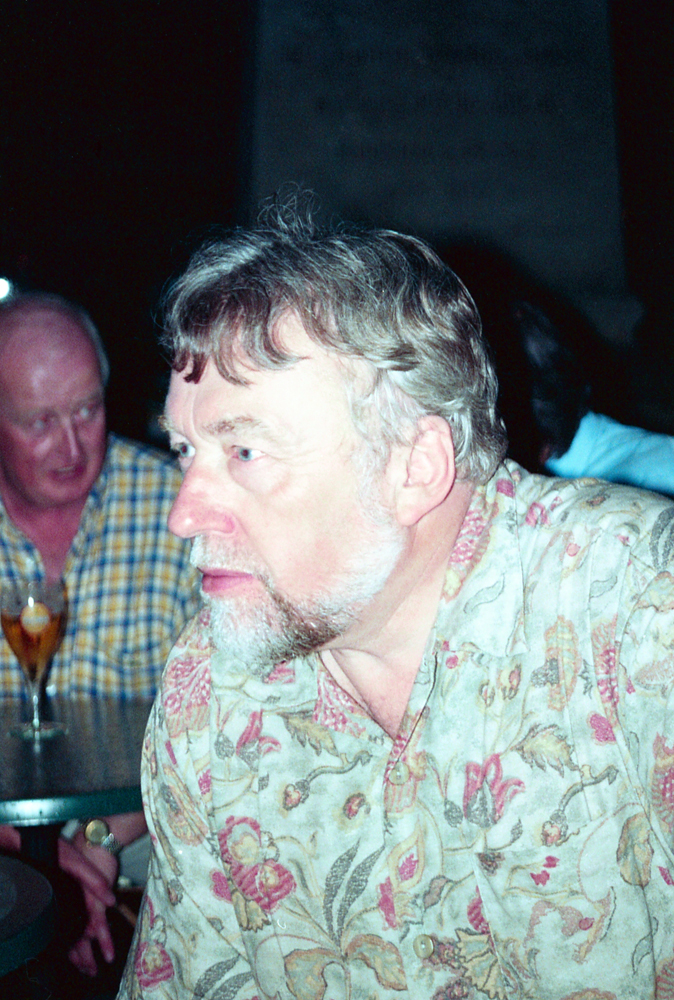 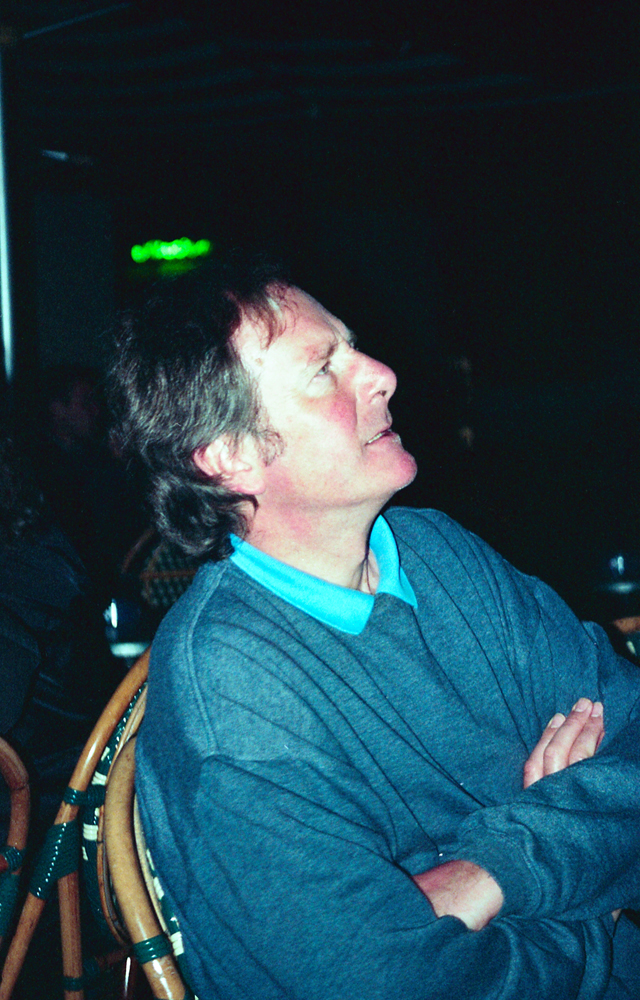 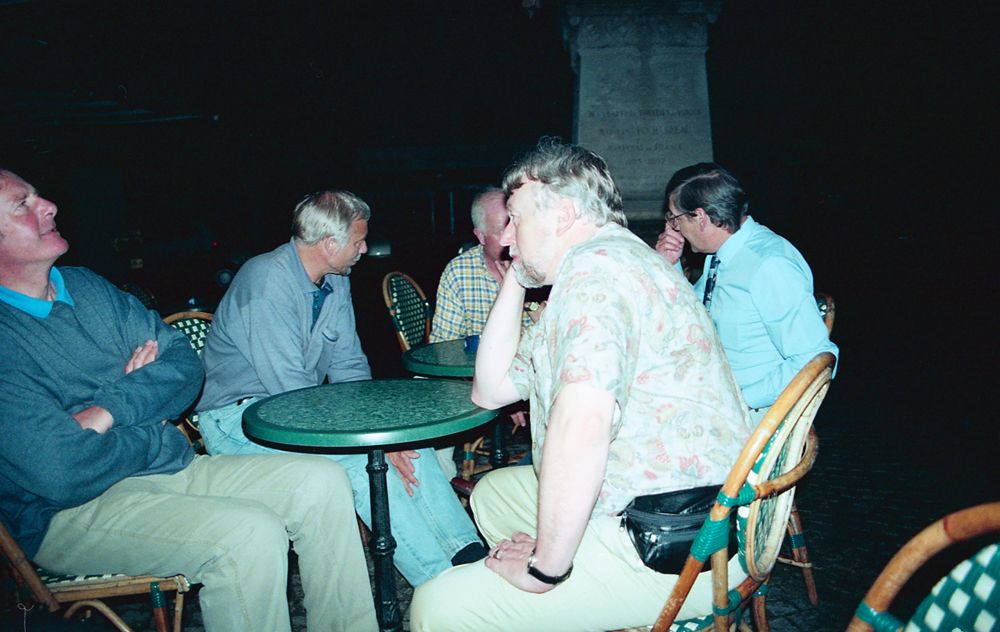 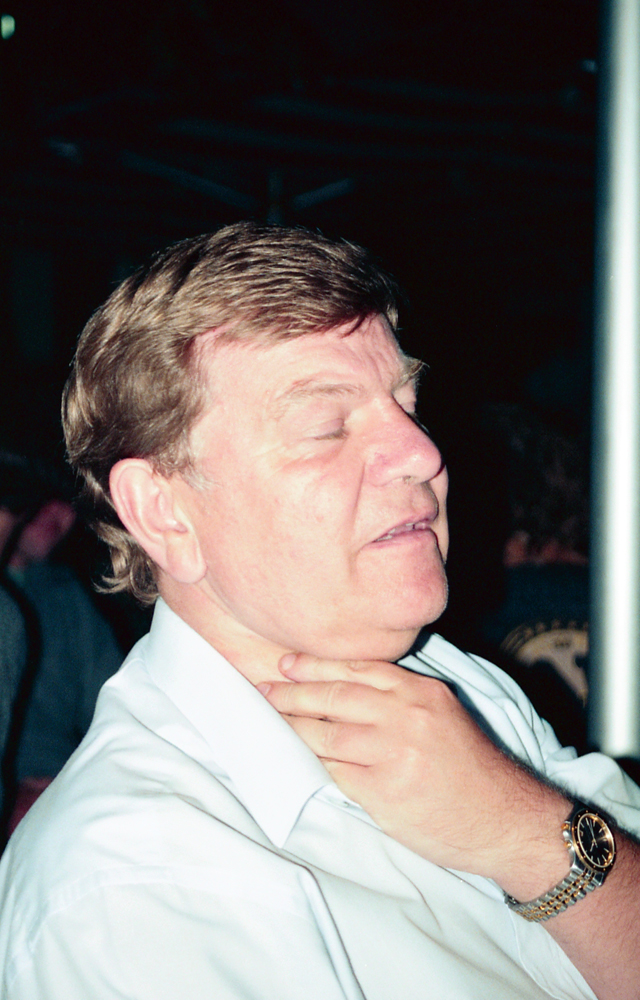 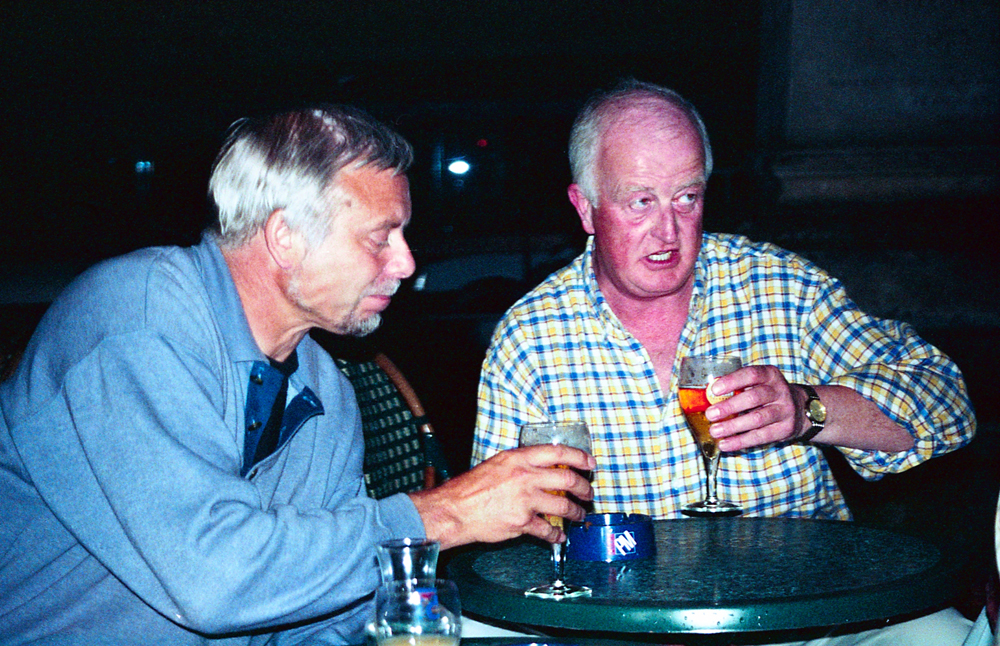 It was while we were having a drink that the strangest incident of the week-end occurred.  After we had been sitting there for about twenty minutes, a motor bike pulled up.  The rider got off and started chatting with some of the many other young French people sitting outside the bar.  Nothing unusual there and we didn’t pay any real attention to him.  About ten minutes later however, there came the most enormous racket of a motor cycle engine being revved very highly.  It seemed that the rider of the motor cycle we had seen earlier was putting on some kind of show for his friends!

He revved the engine, seemingly to its limit, but held the machine on the front brakes, so that the rear wheel was turning at great speed, with the engine racing.  The rear tyre was not being held off the road, and as it was in contact with the tarmac, clouds of smoke poured off it and billowed over the town square, almost asphyxiating everyone!  He kept this up for a good five minutes, by which time we were all beginning to wonder if he was quite mad...  Eventually, as he continued to race the engine of the motor bike, with the rear wheel still in contact with the ground and the bike being held in one spot on the front brakes, not surprisingly, the rear tyre wore through and punctured.  By this time the local gendarmes had arrived, no doubt alerted, either by the noise or more likely, by a local resident indicating that there were some pretty strange goings on in the square!

The young man was clearly not amused at being questioned by the police and after a bit of a struggle, he was led away to a waiting police van.  The strange thing was that all of the people who had been outside the bar seemed to look upon this incident with complete insouciance, which made us wonder if they had watched similar performances in the past!  We tried to fathom out between us just what it had all been about.  Was the bike stolen?  Was the rider drunk?  Was he extremely rich and attention-seeking?  Was he just plain mad?!  We couldn’t come up with any sensible answer, although I suspect that the majority view was that perhaps the bike had been stolen, and he really didn’t care what happened to it!

After this novel interlude, we decided we ought to be getting back to the auberge.  It was by now getting on for 2.00 a.m. on Saturday morning.  Once again, I had cause to question our preparation for the race the next day.  There was I, having drunk sufficient wine and calvados to be nicely mellow, still up and about at 2.00 a.m., with no sleep at all in prospect after whatever I managed to get that night until Sunday night (or Monday morning, even!), with a full 24 hours of racing in between.  Still, there wasn’t anything I could do about it and I certainly hadn’t been about to suggest we all had an early night!