As had been the case since 2011, James, Tony and I would be taking up our usual seats in the front row of the Durand (T17) grandstand, however neither Allon nor Nane had grandstand seats and having done a recce earlier on, they set off to watch the start from around at the Dunlop chicane.  We were into our seats just after 2 pm by which time the cars and team personnel, including all the drivers were lined up along the start/finish straight.  As we settled into our seats we could identify the driving teams of the major entries, lined up opposite us, as well as the likes of the now-retired Alan McNish and F1's Fernando Alonso who had been invited by the ACO to flag the race off.

We live in a small world, full of coincidences and, as you do, I got into conversation with an English couple sitting next to me who it transpired hailed from Petersfield, not so very far away from me in Hampshire....

With all of the pre-race festivities over, the pace lap soon got under way in that highly-charged atmosphere we're now so familiar with that makes the hairs stand up on the back of your neck.  Seven minutes or so during which the progress of the pace car is measured by the pictures on the big screens as well as the helicopters tracking the cars around the circuit.  And then, all in a rush, the cars burst out of the Ford Chicane, providing that fabulous spectacle of both sight and sound as they pour across the startline and disappear into the Dunlop chicane as the first lap - and the countdown to the end of the 2014 24 Heures du Mans begins.  As the cars head away towards Tertre Rouge and the Mulsanne, the engine notes recede, replaced by the excited chattering of the crowd as it eagerly awaits the return of the cars at the end of the first lap.

So we settled down to watch the first few hours of the race unfold, keen to see who would get the upper hand in these early stages in the battle between the three factory LMP1 teams.  Toyota already seemed relatively comfortable, but the Audis were giving strong chase and it appeared that the Porsches didn't quite have the legs to really push either of their opponents.

I guess we were about an hour and a half into the race when the rain came.  As it happened, James and Tony had both left the stand briefly when all of a sudden it became cooler and I waited to see if the raindrops now being reported on Radio Le Mans would turn into anything significant.  I was hoping not, as I had no wet weather gear with me at all.  It was at 4.25 that I received a text from Allon saying, 'Spots of rain' and then it came down, leaving people scrambling up the grandstand or as I did, just sitting it out.  I had no choice really as Tony and James had left all their gear by their seats and I wasn't able to carry it all down into the cafe.

To be honest, the rain came as quite a shock.  Of course, we're used to it, having had some fairly damp Le Mans weeks over the last few years, but this week had been so good, wall-to-wall sunshine pretty much every day, that the thought of heavy rain just hadn't registered on my radar at all.  I weathered the 'storm' out, but was concerned when I received another text from Allon saying that more rain clouds were approaching from the Tertre Rouge area.  By this time he and Nane had opted for the shelter of the Espace Club.  This second belt of heavy rain came in hard and had a dramatic effect on the race, leaving parts of the circuit completely awash and with next to no visibility for the drivers.  This led to a number of accidents, including that which befell the #3 Audi (which was out of the race on the spot) and the #8 Toyota.  The Toyota made it back to the pits for repairs but the hour it spent there dropped it well down the order and out of contention.  It was kind of exciting (although there was palpable relief - after last year - to learn that everyone was OK) but really disappointing to lose two of the major protagonists so early in the race.

I eventually found James and Tony enjoying the dry comfort of the cafe and having regrouped we left the grandstand at 5.45 to head down to meet the others (including Andy and Julie) at the Espace Club.  I actually nipped back to the car to pick up my waterproof 'Jack-in-a-Pack' and a light jumper before heading towards the Espace Club to meet the others.  By this time they had set up camp in the sunshine that had returned, up on the bank above the Espace Club and I settled down to watch the race again, even managing 15 minutes or so in one of the chairs that Allon and Nane had sensibly brought with them.

It was still quite bright and reasonably warm by the time we moved on from there and walked down alongside the Bugatti circuit to the raised area at the bottom of the Esses, where we found that one familiar spot there where you can actually photograph the cars through a gap in the seemingly ever-present fencing as they head out of the last part of the Esses and on down to Tertre Rouge. 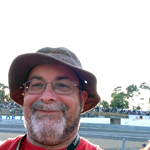 Although I doubt that I will ever truly come to terms with the appalling sacrilege which was the 'butchering' of the dramatic drop down from the Dunlop Bridge to the Esses, the view from where we stood was pretty good and we stayed in that spot for about half an hour (including a moment for a video 'selfie' to send to Jayne in the States!), before walking down the steep steps at the back of the bank for the short walk up the ramp to another bank, this time the one overlooking Tertre Rouge corner.