1990 is the next year in my series of updated annual stories. By the time I started my site I had already been to Le Mans 15 times, however I only had a tiny amount of web space from BT (astonishingly, 5Mb, if I recall correctly!), so I could only put up a page or two at a time, each with only 4-5 photographs and then I had to take a page down to put another one up! As a result, most of the photographs taken have never seen the light of day, other than in my albums at home. Bear in mind that these are scans of 'real' photographs, so the quality isn't as high as modern digital photographs. (That's my excuse, anyway!). Here then is the revised story of the Tourists' 1990 trip to Le Mans....

1990 turned out to be something of a watershed year for the Le Mans team. There were good and bad reasons for this. Robert Peel had been devastated by the death of his young daughter, and had far more important things on his mind than a motor race. Jayne had presented me with a son James, in November, 1989, and the world of sports car racing was in a state of considerable turmoil.

James was already a source of inspiration to me, but the fact that he was only a few months old presented me with a dilemma. I really wanted to go to Le Mans (as I always do!), but I realised that perhaps now was not the best time to leave Jayne on her own to cope with the children. In the end, as always, it was Jayne herself who said I should go - I'm afraid I didn't need asking twice!

As for the sports car scene generally, well, things were pretty much in a mess. The ACO was at war with the FISA and the resulting truce left us with two carbuncles on the Mulsanne Straight - chicanes! The race was now also a non-championship event, and Mercedes decreed that they would not race if there were no championship points at stake. So, as in 1988, that left Porsche and Jaguar to battle it out.

Well, it was rather more than the sports car scene in general that was in a state of flux in 1990. The Tourists were also in some trouble. The result was a very streamlined team for La Sarthe in 1990, but nevertheless a strong one of diehards. Myself, Ian, Martyn and Alan made up the single car entry for the trip south to la belle France, Ian having collected me from the railway station in Southampton, as at this time we were a one-car family. The arrangements this year were somewhat hastily made with the result that when Ian was able to get around to making them the usual options were closed to him. Thus it was that we found ourselves boarding the boat from Portsmouth to Le Havre, on a dull, grey Friday afternoon. 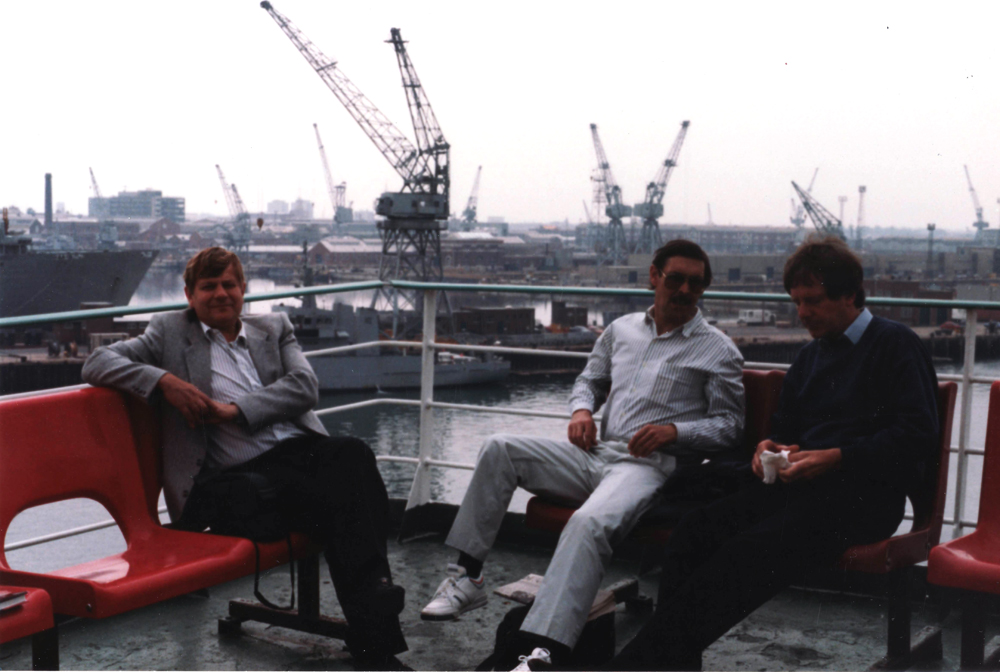 It was, by far, the smallest "team" that we had mustered in five years, and I was initially unsure how the weekend's entertainment would be affected by this. It soon became clear though that a smaller group brought with it a number of distinct advantages, not the least of which was that we were able to travel around in just one vehicle. While waiting at Portsmouth to board the ferry, Alan and Martyn went off in search of tickets. (You may be surprised to learn that at the beginning of the Le Mans weekend, tickets for the circuit and the grandstands were often on sale at the major ferry ports). They managed to find a vendor selling tickets for the Dunlop Grandstand at the Dunlop Curve. Three of these (very expensive) tickets were purchased prior to boarding the ferry for France. Having reached grey Le Havre, after yet another uneventful ferry crossing, we made our way to the Hotel Mercure, where we would be staying the night. We had eaten on the boat going over so we didn't take an evening meal, but instead wandered off to see the city, and to have a beer or two. After exploring a place which frankly seemed to have virtually nothing to explore, we headed back to the hotel for a good night's sleep. Once again, as in 1988 in Domfront, I shared with Martin. The accommodation was good, with en suite bath and toilet and a TV, which we watched for some time before eventually falling asleep. 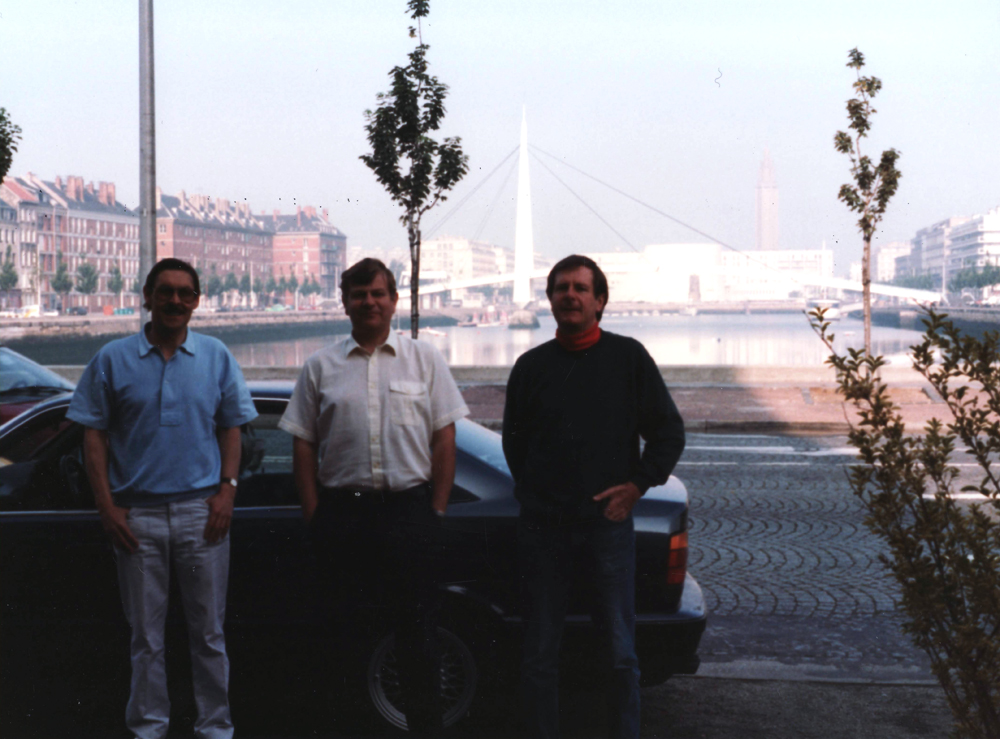 On rising we took a particularly good breakfast in the hotel and assembled outside for the standard team photograph. Of course, another of the advantages of having a team of only four, with two to each room, was that you could be pretty certain of everyone getting their act together (even Alan!) and rising at a reasonable time, ready for the journey down to the circuit. That was rarely the case with teams of seven, eight or more! The morning had dawned much brighter than the day before and we drove to the circuit in blistering sunshine. Some way out of Le Mans we purchased some lunch in a small village along the route, which was already jammed with British-registered cars and motor cycles. We bought pizza, pastries and beer to eat when we reached the circuit. 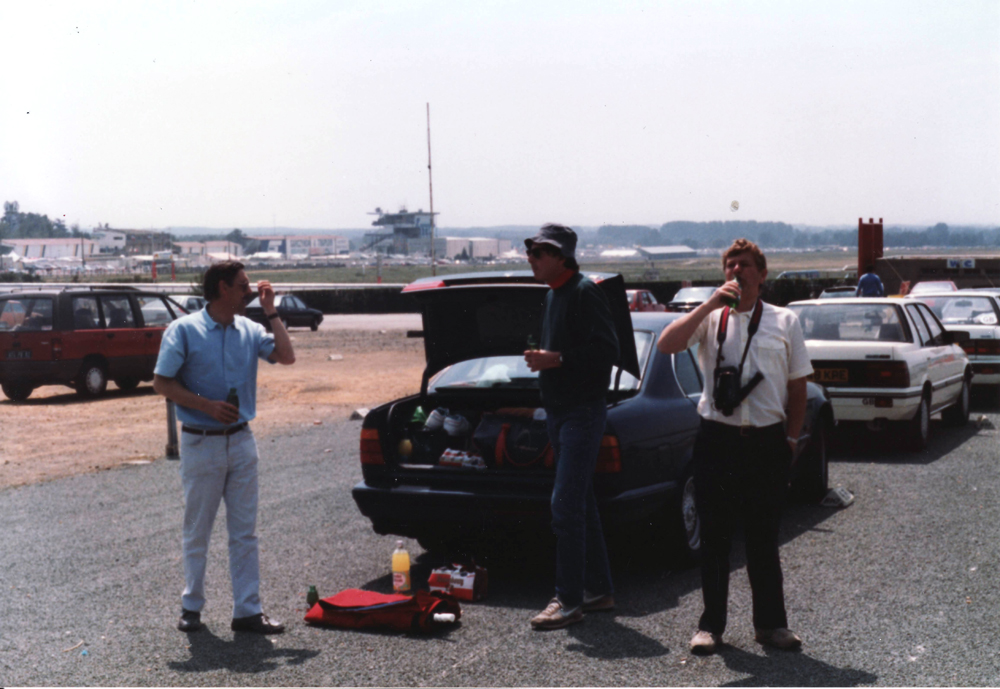 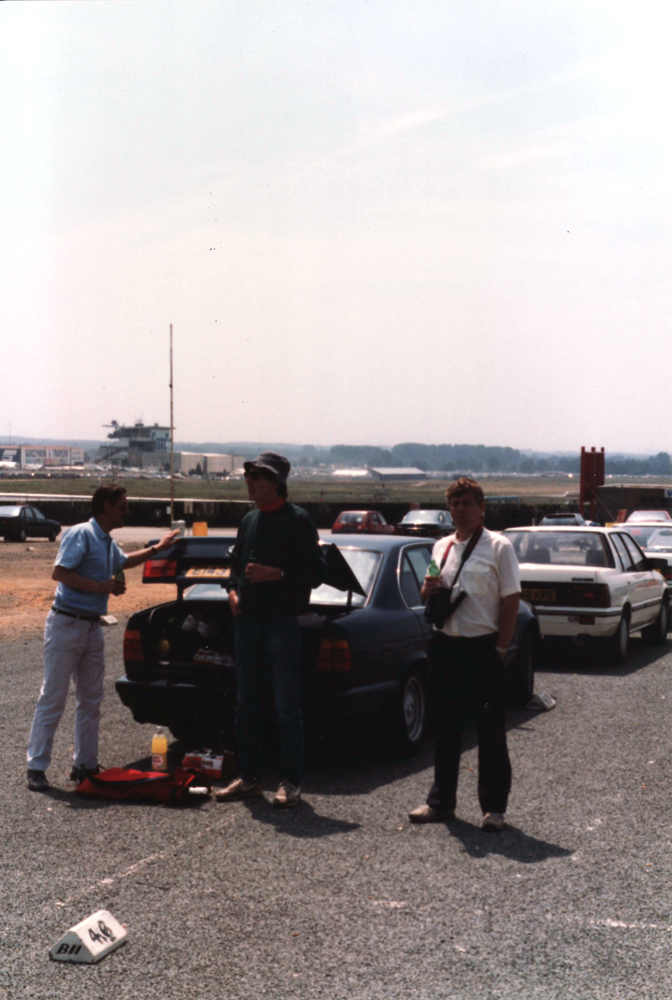 Apart from the purchase of the grandstand seats we had also managed to buy our garage rouge ticket in Portsmouth at the same time. This year however, that ticket was rather more special than in years before. This was a garage rouge reservé ticket, which brought with it a numbered bay in a rather more up-market parking area, which although situated a little further from the track, did mean that we could park at our leisure, without having other cars "attached" to our front and rear bumpers! The pizza, pastries and beer were consumed with all speed, whilst yours truly got well into the atmosphere of the week-end with more team photographs. We arrived in pretty good time, with the result that I was prepared to join Ian on his annual "annoy the French spectators" walk through the tribunes opposite the pits to get a good spot from which to watch the parade. At this time (it was about 2.30 by the time we were in situ) the crowds weren't yet dense enough to persuade me that it wasn't worth the effort. (I also had thirteen hours on my tod at Le Mans in 1989 still on my mind, and I was fairly keen to enjoy the race in the company of the others this year!). I was able to get a pretty good set of photographs of the drivers this year, for the first time since 1986. Once again though, as with my shot of Derek Warwick in 1986, fate conspired against me so that my picture of the Jaguar drivers taking a collective bow in front of the tribunes was again marred by shoddy camera work! 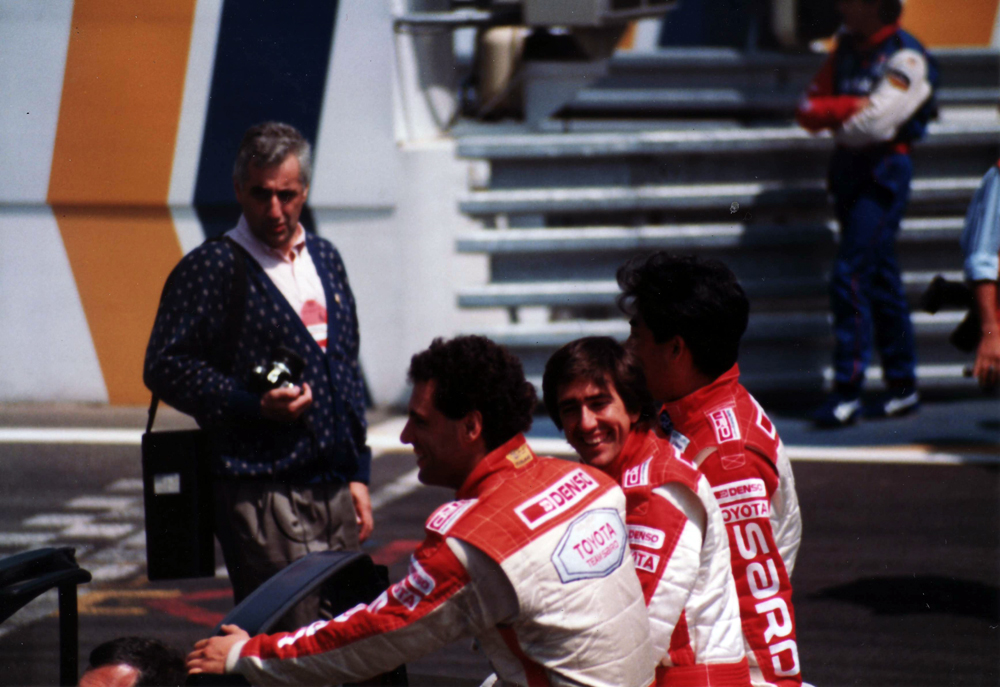 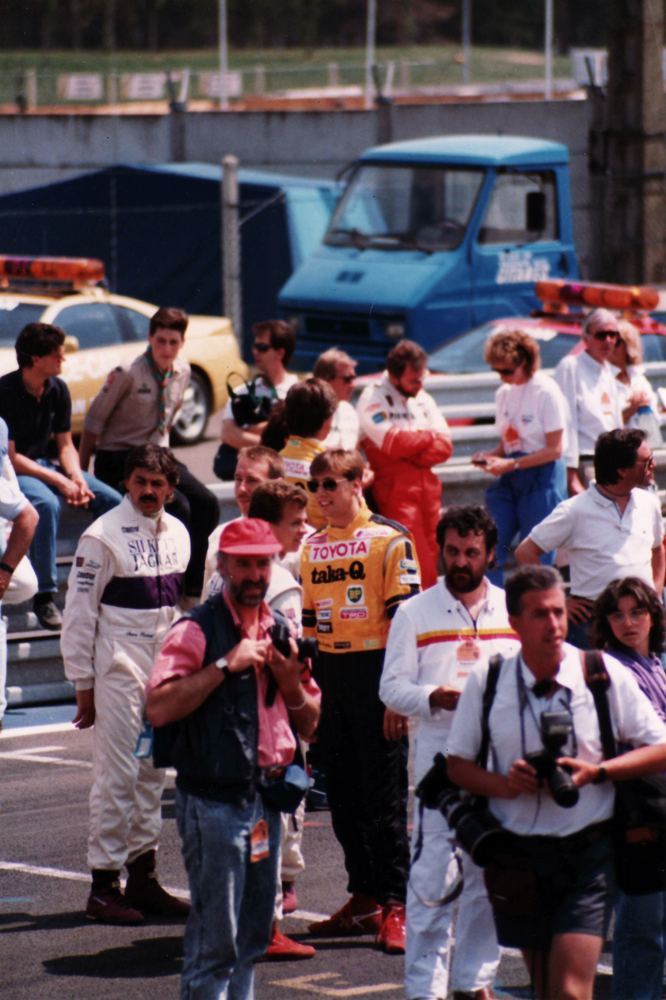 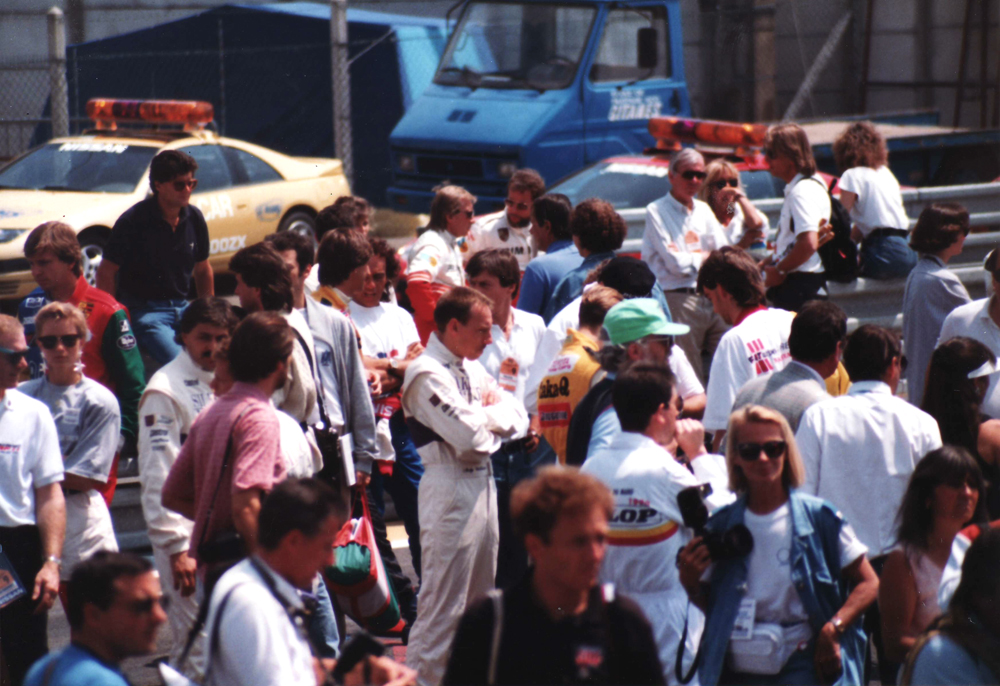 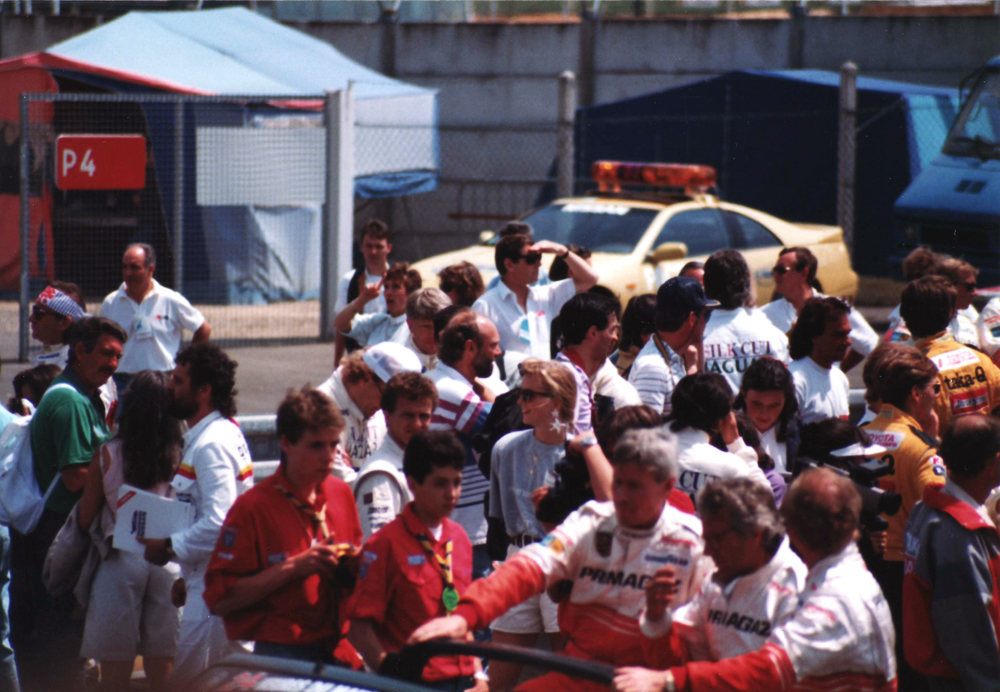 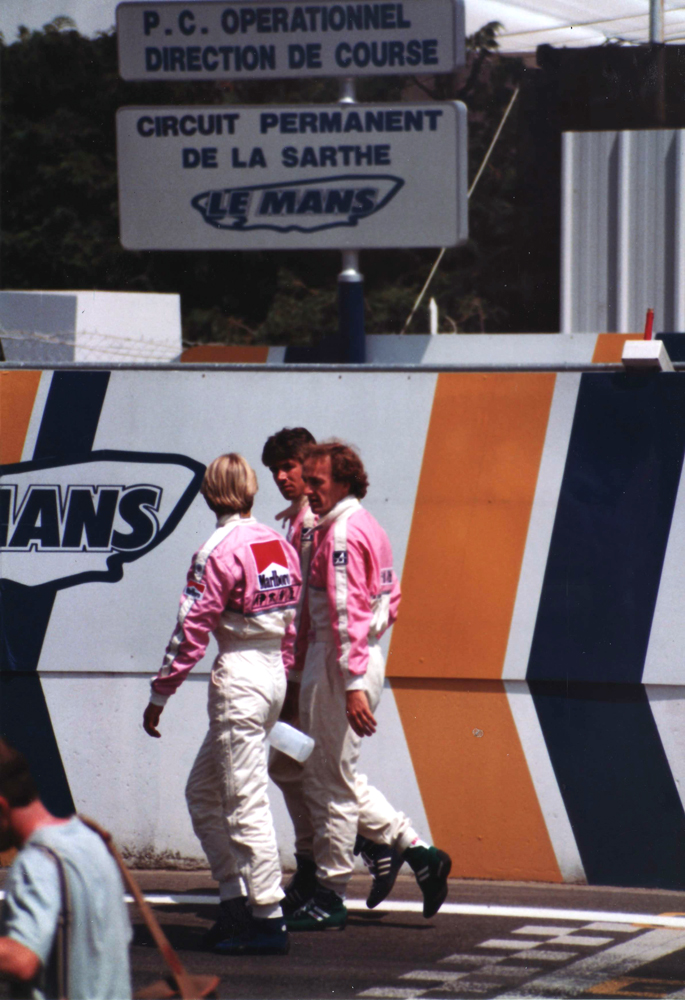 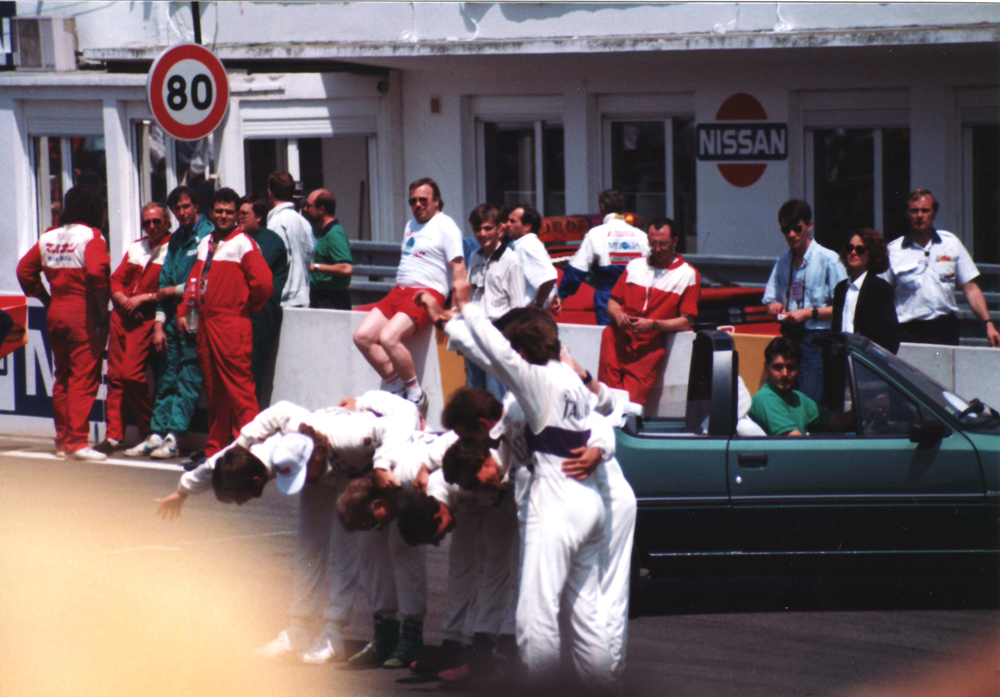 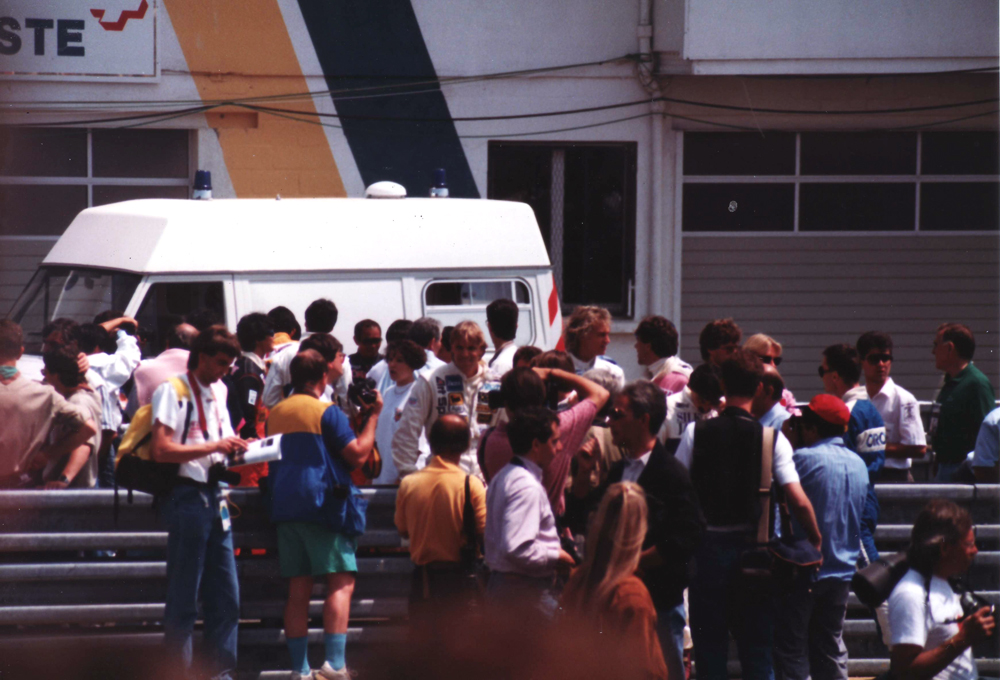 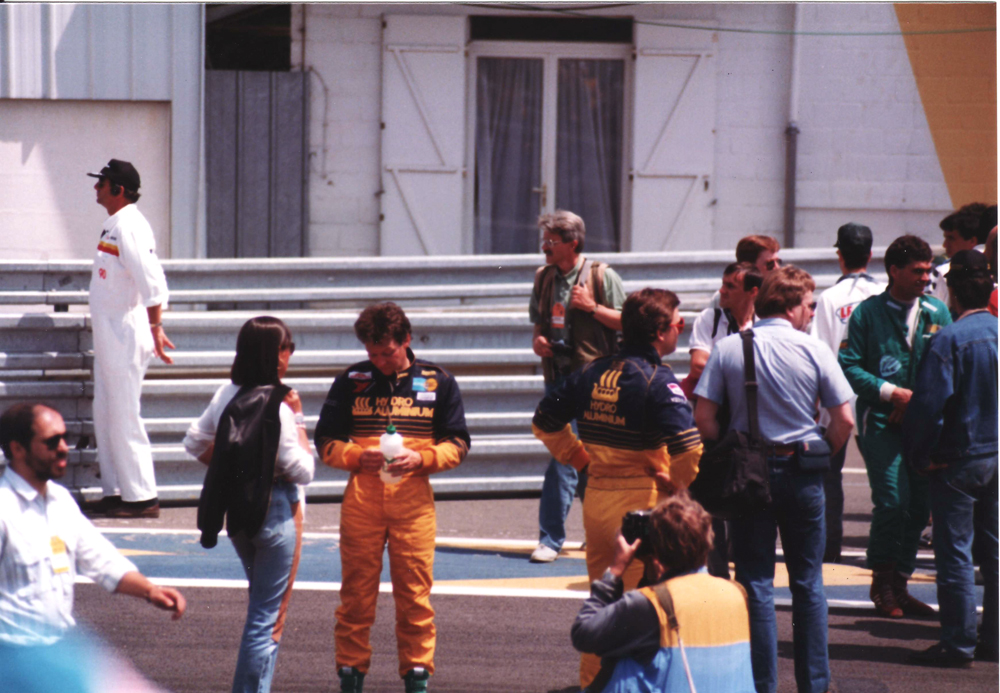 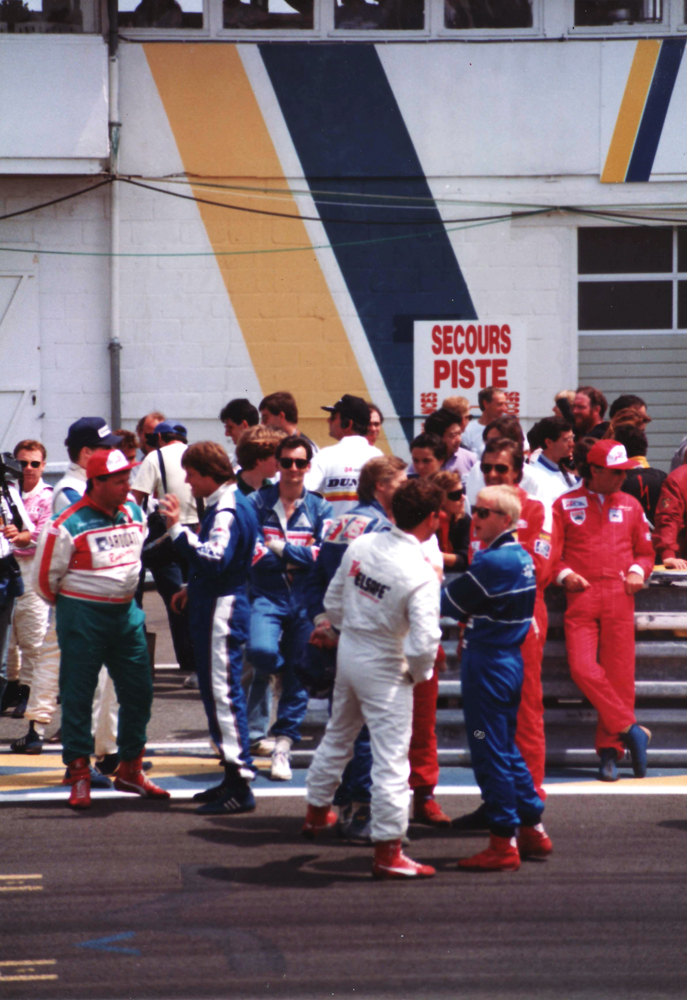 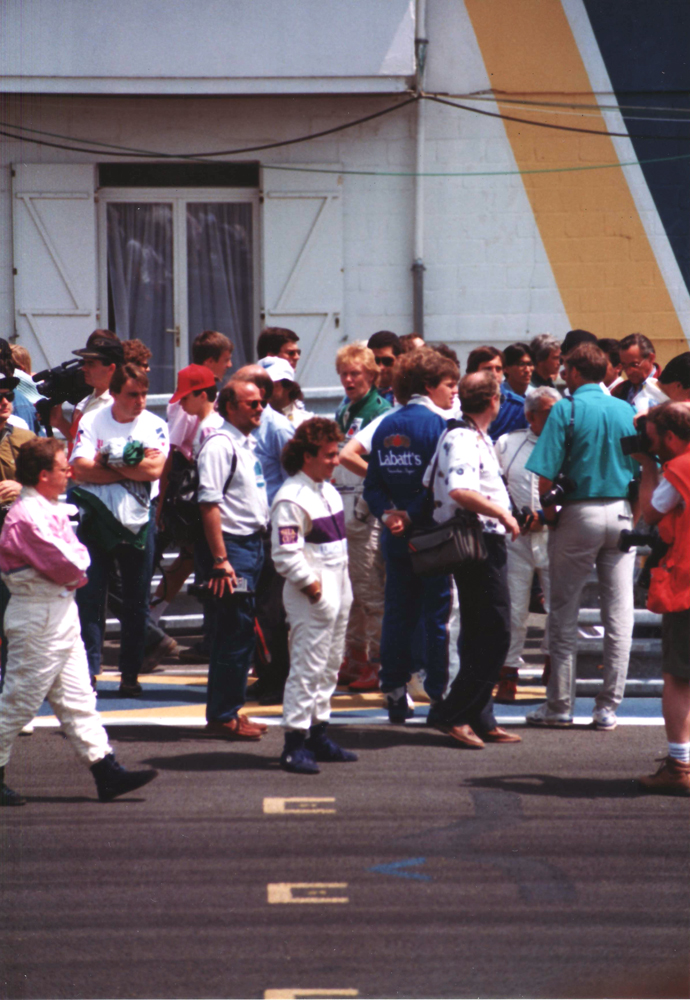 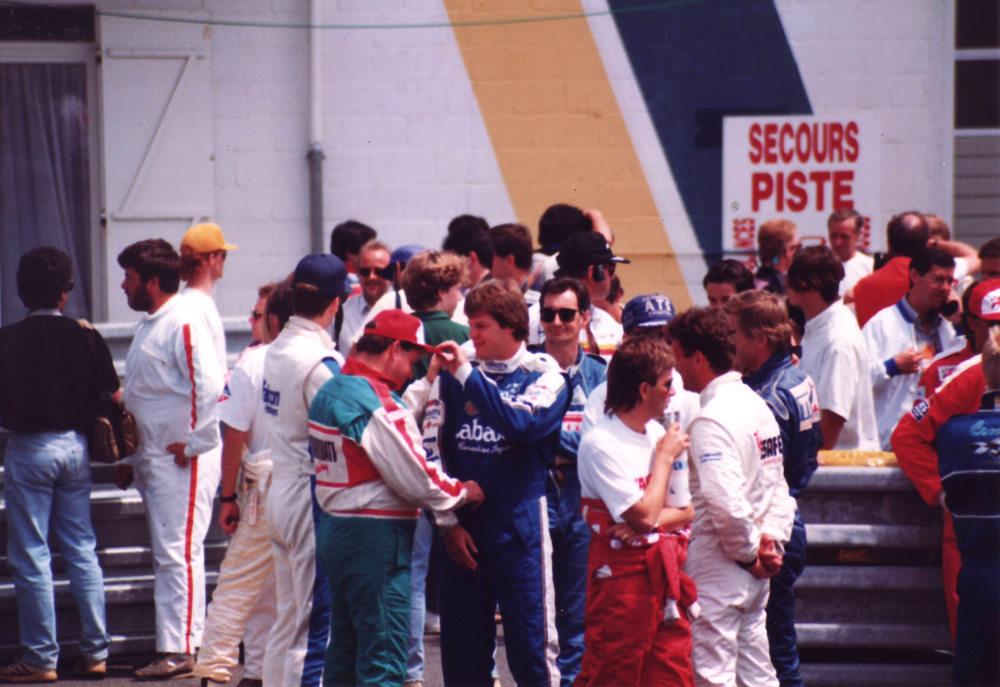 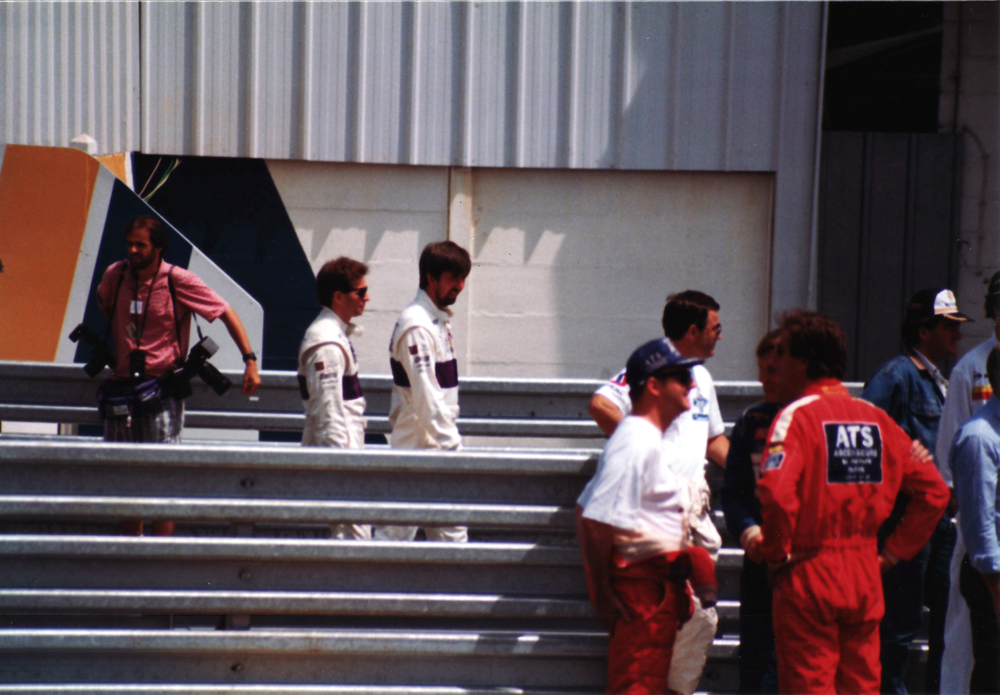 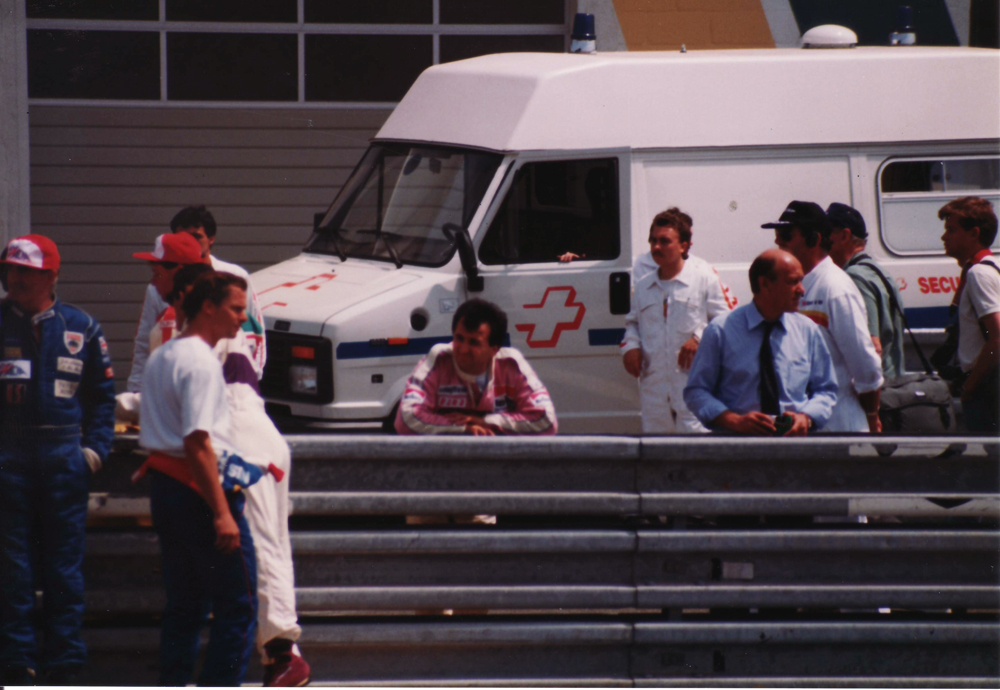 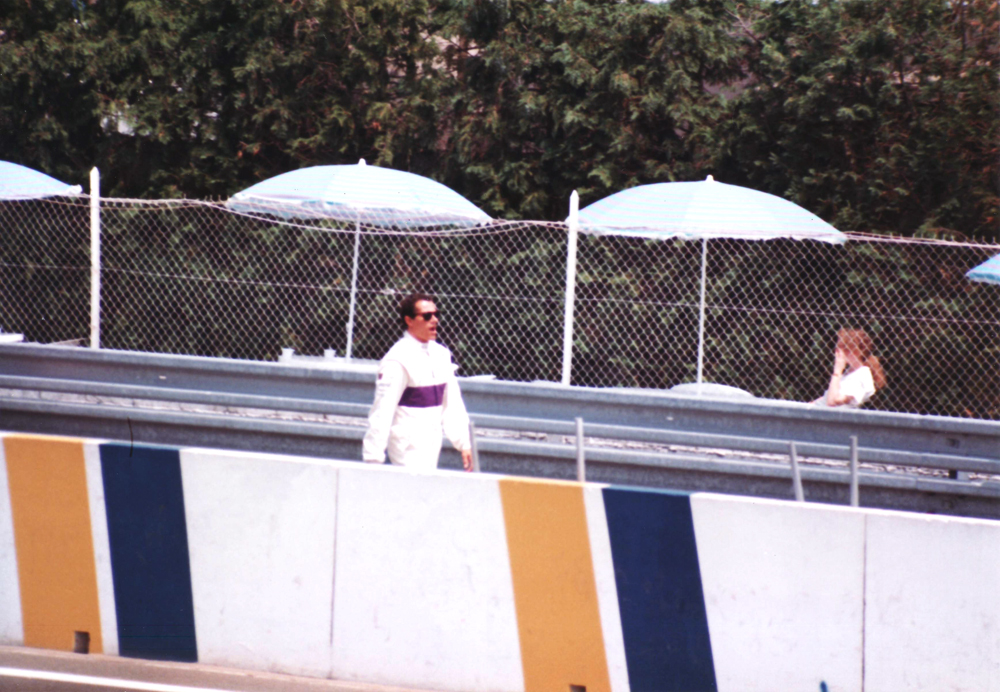 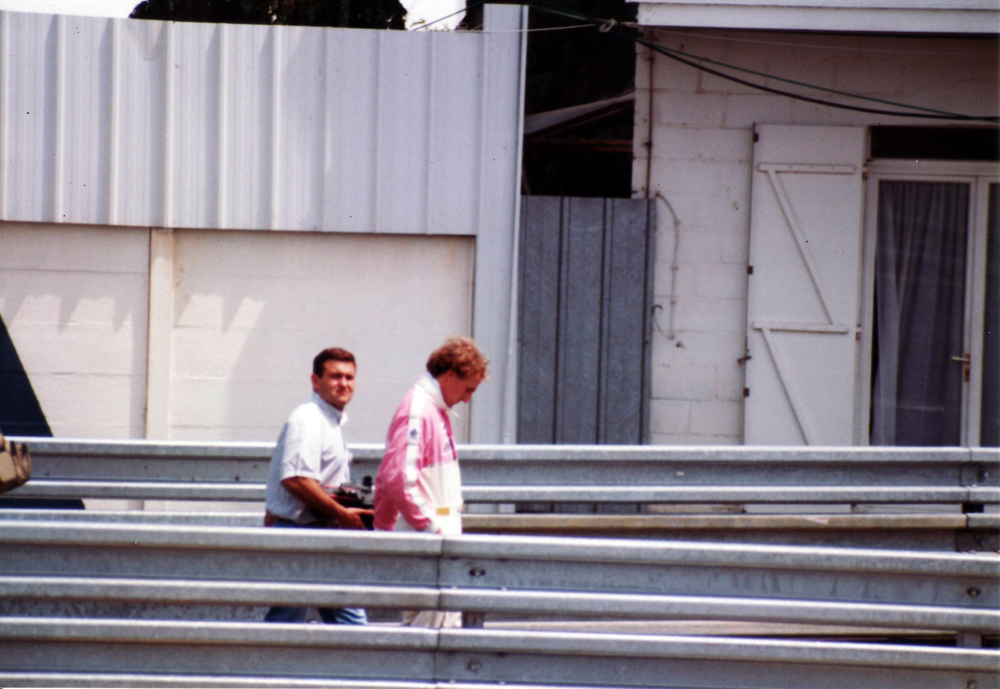 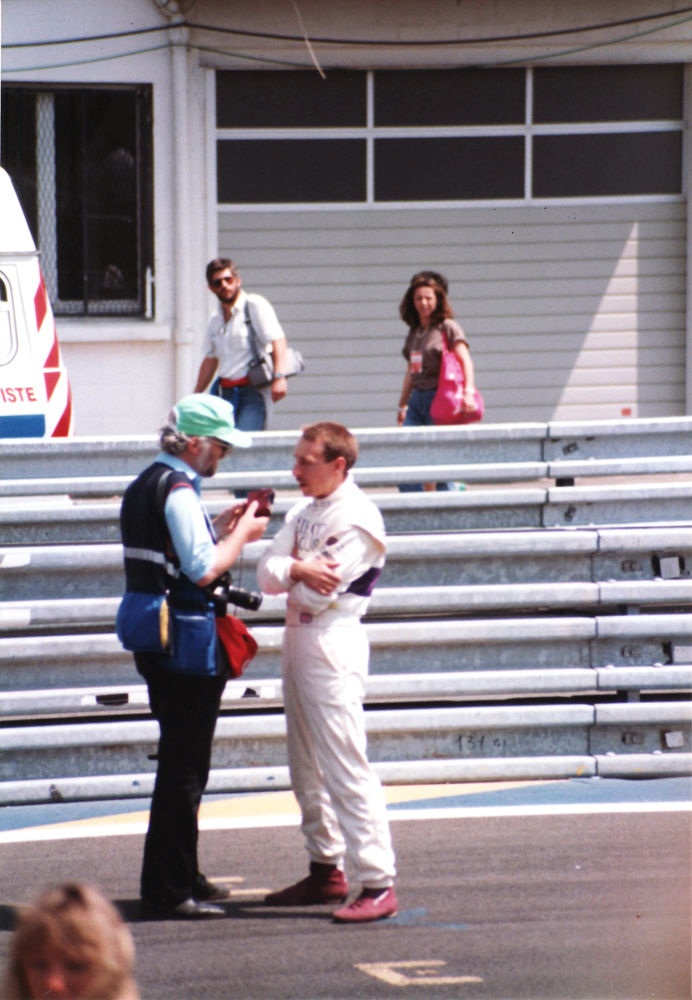 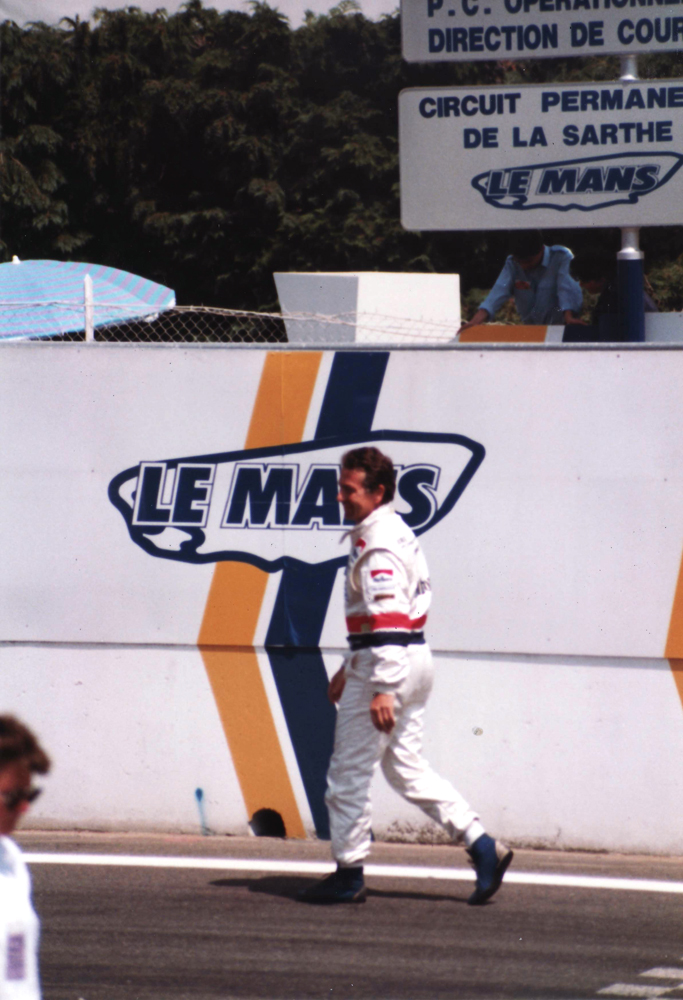 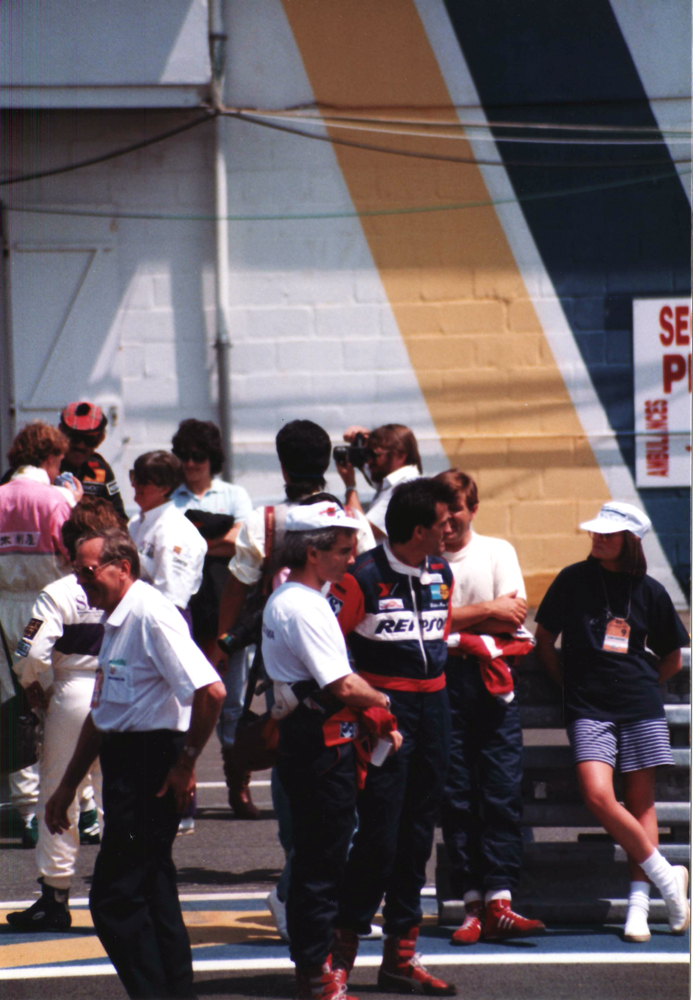 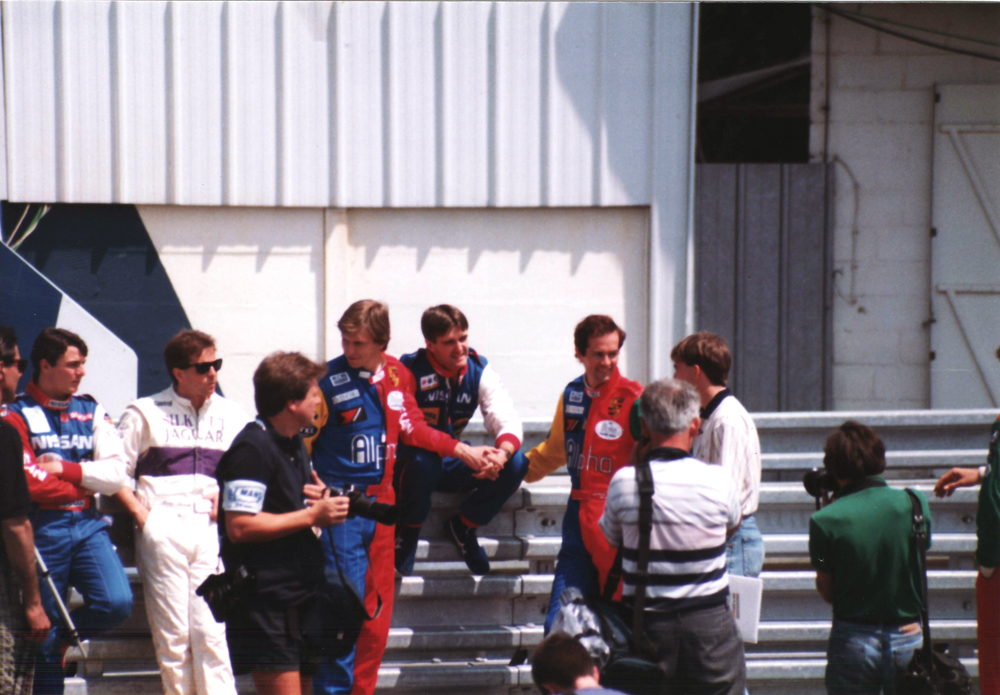 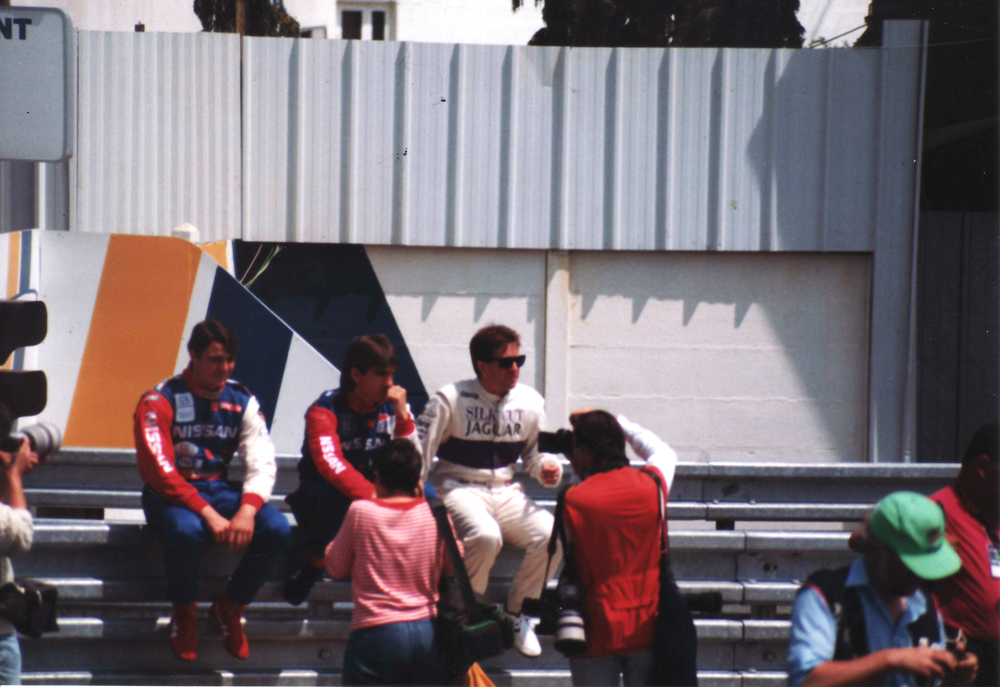 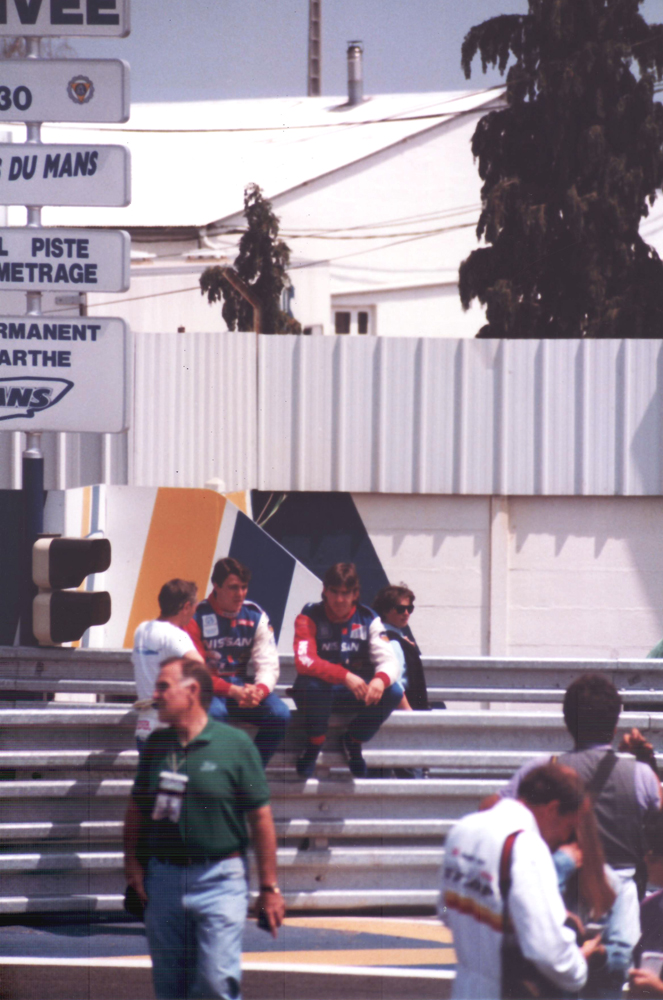 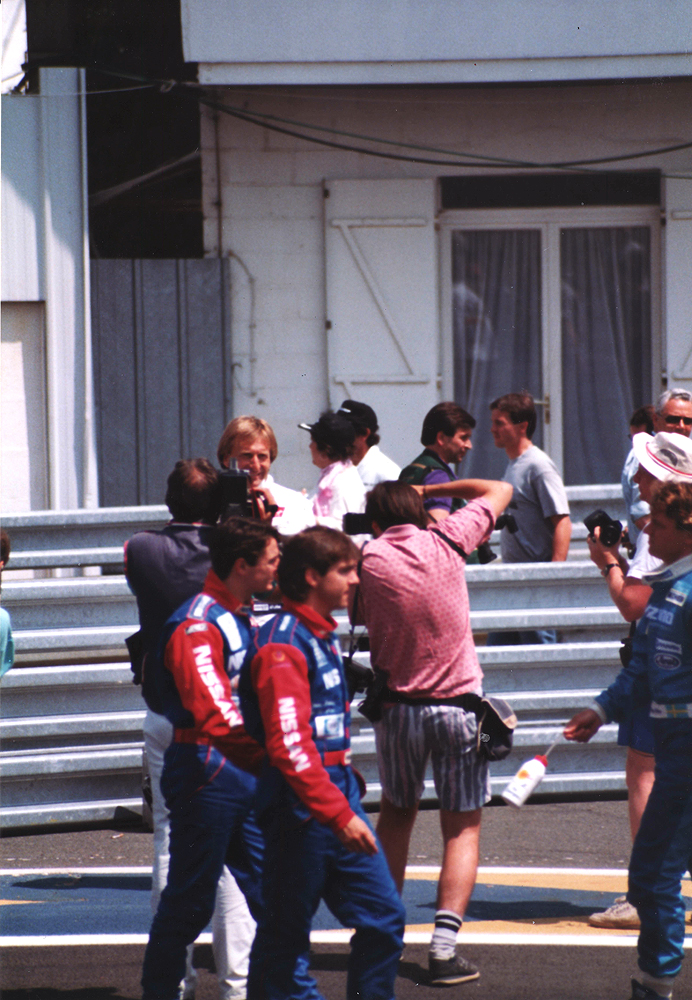 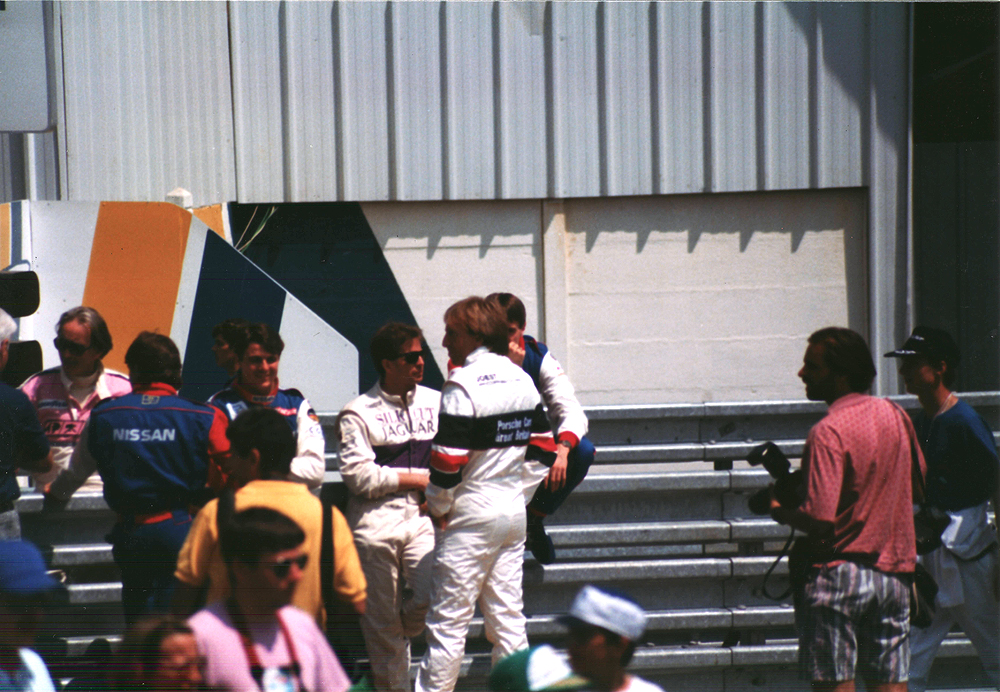 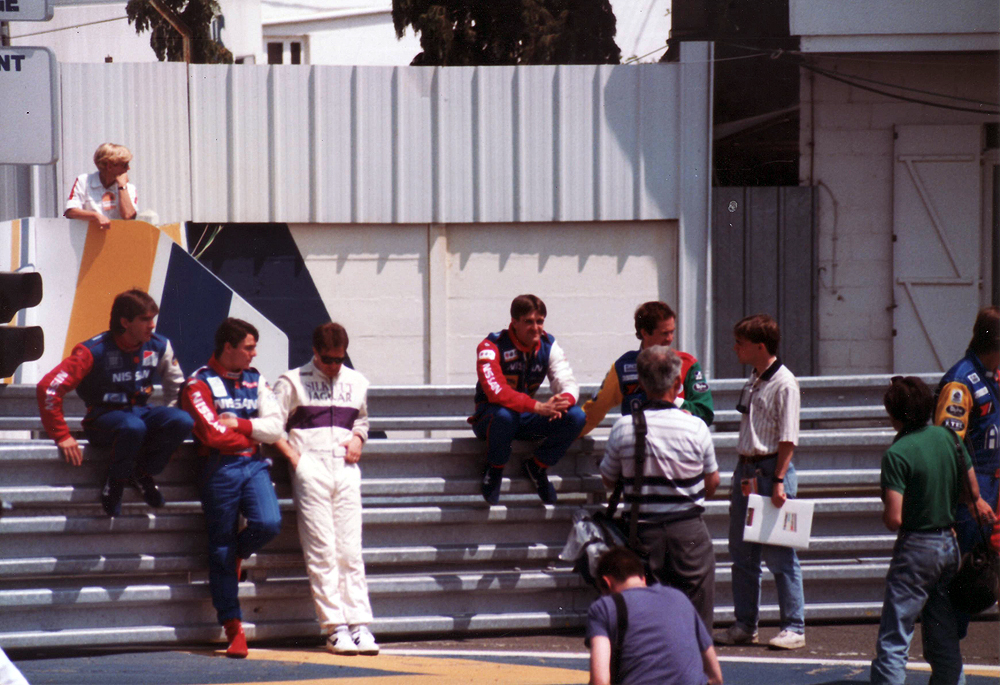