After missing out on the Le Mans trip in 1998, Ian and the rest of the Tourists were keener than ever to renew their acquaintance with Le Mans in '99. In fact, comparing '98 and '99, it was a case of our smallest team to our largest, as the Tourists were 12-strong in 1999. In fact, Ian nearly had a problem to start with as he had to be home on the Monday after the race to go on holiday with his wife Carole for their 25th anniversary. In order not to cut the week-end too short, we decided to travel over on the Thursday evening, instead of Friday morning.

So it was that 11 of the 12 met up as usual at Ian's home near Southampton on Friday evening. There were of course the regulars, Ian, Martyn, Alan, Pierre, and Jim. Ian's son Robert joined us for the first time since 1991. Back also for their second trips were Jeff and Mark, leaving three places for newcomers, Clive, Richard and Steve. Richard had been a last-minute addition when Jim's friend dropped out. Steve was not starting the trip with us, but would be meeting up with us somewhere in France!

We travelled from Portsmouth to Le Havre that evening, arriving in France at about 7 o'clock. We were soon into the three cars (driven by Ian, Martyn and Jim) and on the way to Honfleur for breakfast. 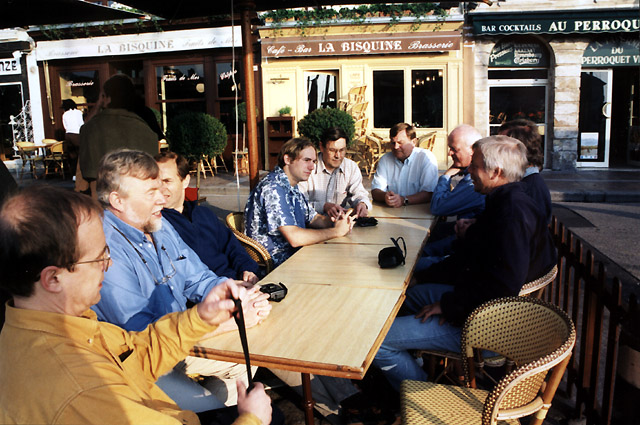 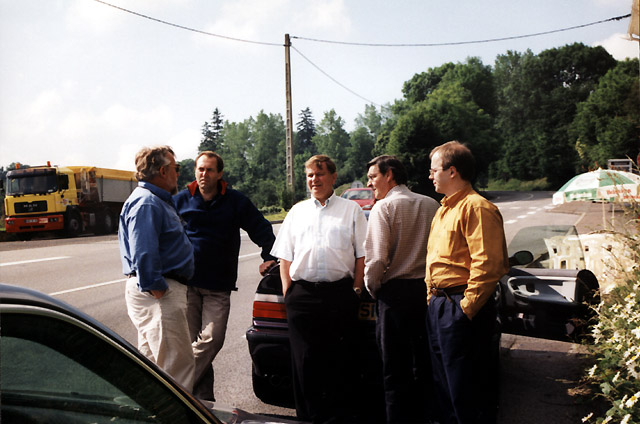 We had an excellent (if rather leisurely) breakfast before setting off for Le Mans. We were well into the journey when we realised that Jim's silver Audi was no longer at the back of our little convoy. We slowed down for a while but there was still no sign of him. Eventually we pulled over and waited......and waited.......but still no Jim. We were getting just a bit worried now, thinking he might have had an accident, but suddenly he appeared - he'd been stopped for speeding! He'd been stuck behind a few lorries and finally got the chance to put his foot down and catch us up and....... It cost him (or rather Jeff who had the cash!) 600 francs. The gendarme who stopped him kindly pointed out that another 8 kph would have meant 5000 francs! In 14 years of Le Mans trips, this was surprisngly our first speeding ticket!

We continued on to Le Mans traveling on through Bernay, Broglie, St. Evroult de Montfort, Nonant le Pin, Sées, Alençon, Fyé, Juillé, Beaumont sur Sarthe, St. Jeanne D’Assé and St. Saturnin.(Don't French towns and villages have wonderful names?!) and arrived at Le Mans at about 12.30. Having persuaded the marshal in the garage rouge to let us in without a ticket, we wandered into the circuit and down through the Village. This was the first time I had got to the circuit before Saturday and I marvelled out how empty it was! 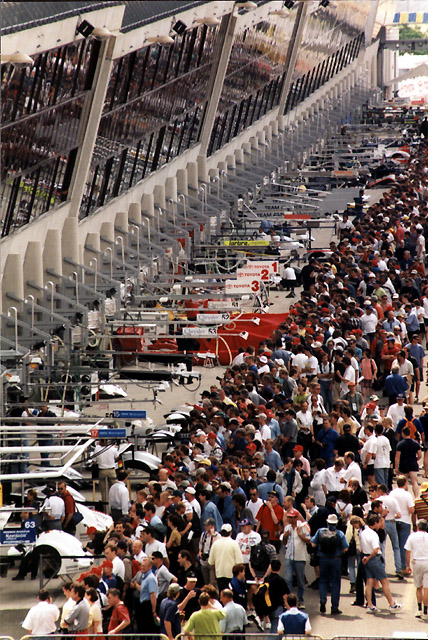 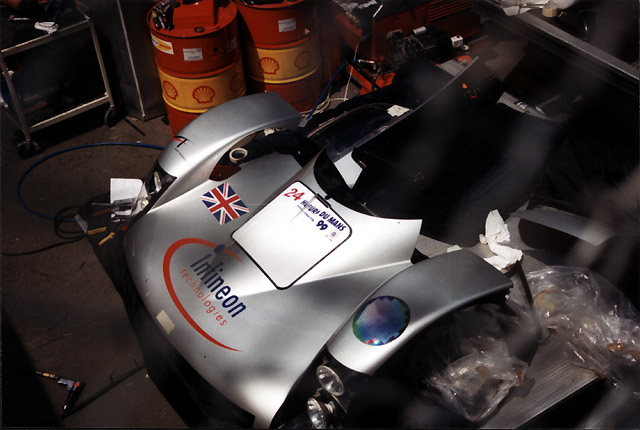 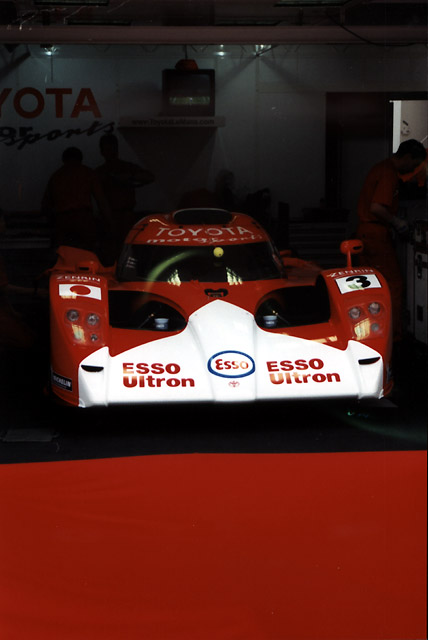 After I'd taken a few obligatory pics from the top of the Welcome building, we made our way from the back of the pits into the pit road (courtesy of an open gate to Hugh Chamberlain's garages!) and I then wandered the pit lane photographing every bit of car and bodywork in sight. 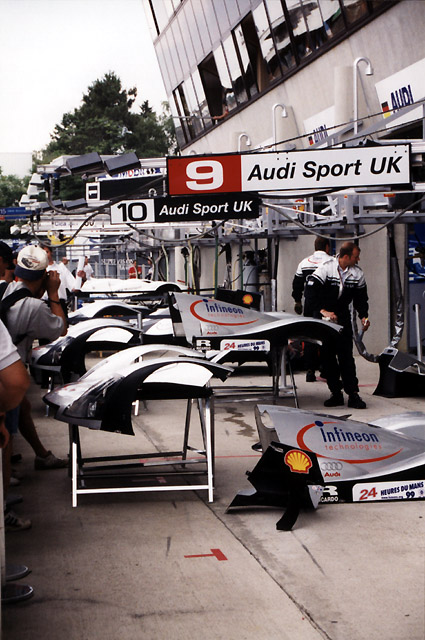 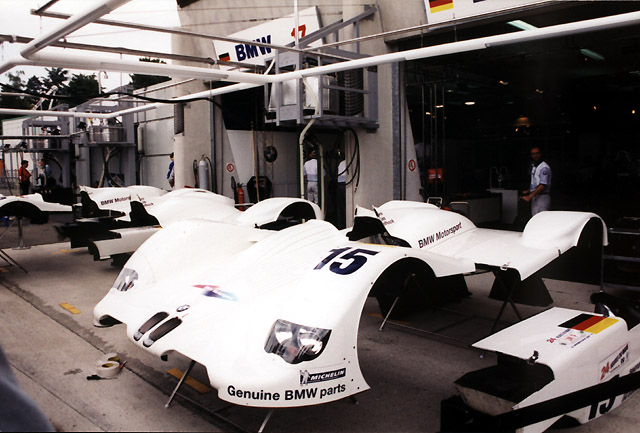 Outside the Panoz pits, David Brabham, Johnny O'Connell and Jan Magnussen were out signing autographs and I was lucky enough to be able to get a few shots of them. (As it happens, I missed out on the autographs, but luckily Jim had managed to get some others for me - cheers Jim!). 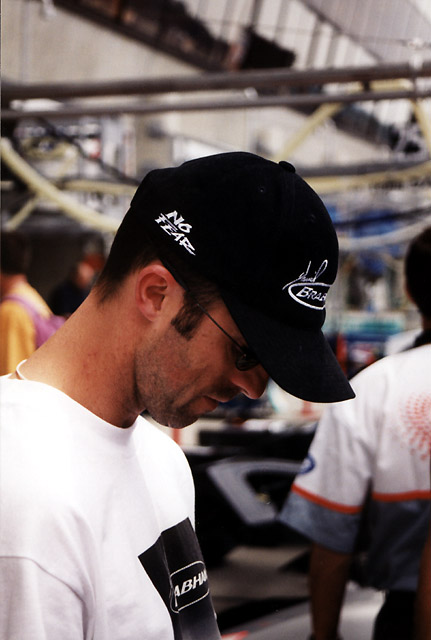 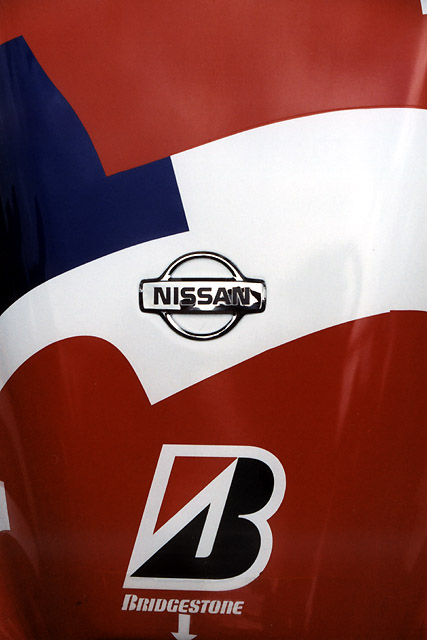 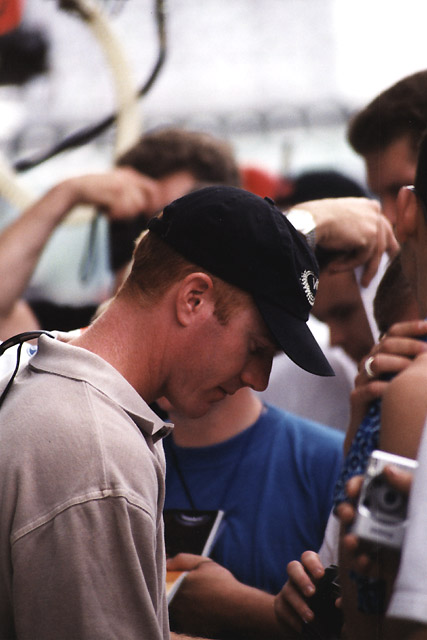 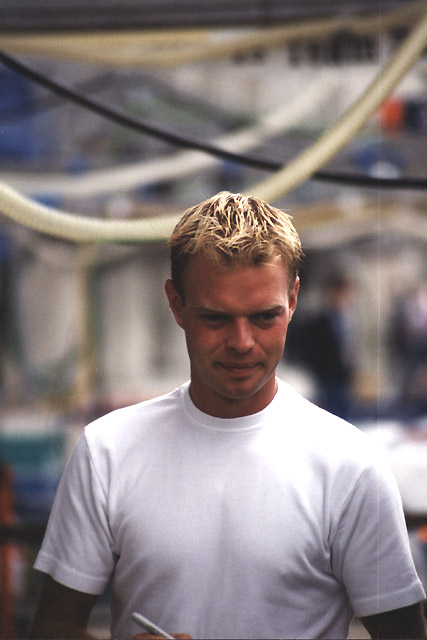 I kept snapping away, enjoying every minute of this, my first venture into the pitlane at Le Mans. I was surprised that so many of the drivers seemed to be about.

I've mentioned Panoz already but it seemed that most of the ORECA drivers were on show too, apparently practising some routine, as they were helmeting up for the purpose. Also out and about were a few of the Audi drivers.

I very much enjoyed my wandering up and down the pit-lane, but all too soon the time came for our rendezvous in the Sebring bar up at the back of the pits grandstand. 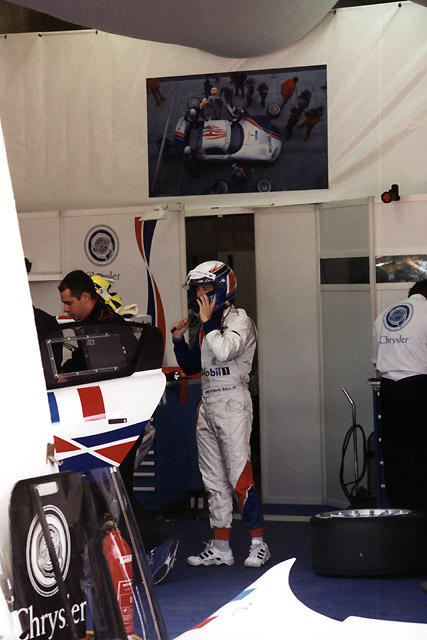 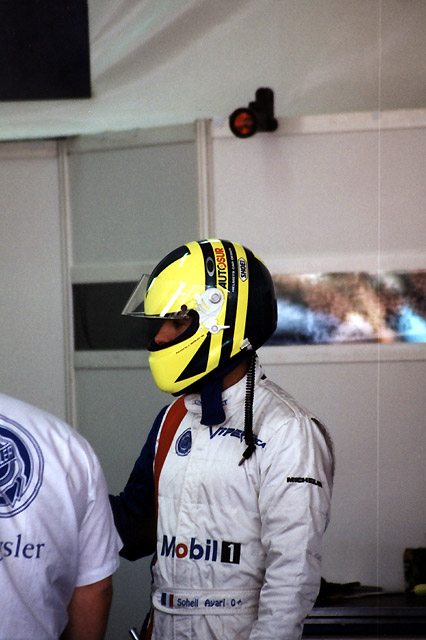 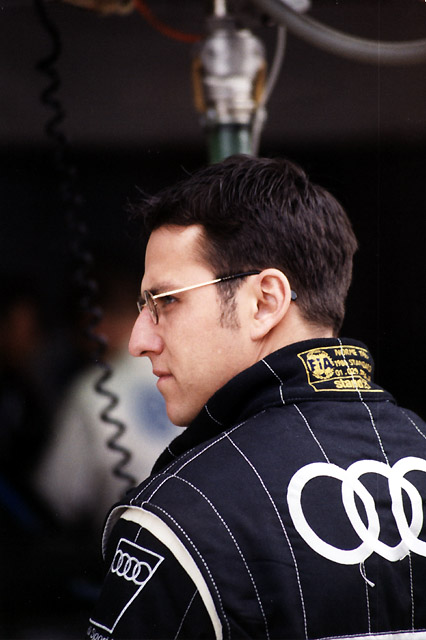 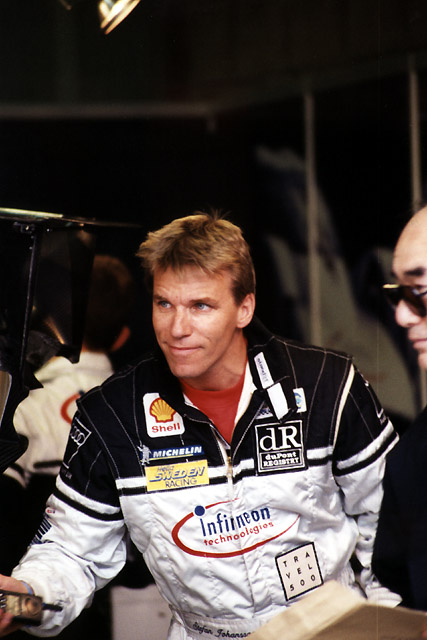 Jeff, Richard, Mark, Clive and Alan had long since given up on the pits walkabout and were already into the serious food and drink business. After we'd all had our fill we left with the intention of heading off to our overnight stop at Vendôme, but before we left, I picked up my programme from the ACO offices (although the list des engagés wasn't available at that time).

We stopped off on the way back to the garage rouge to look at the static displays of Mercedes, BMW, Chrysler and others, but were soon back in the cars, heading through Parigné L'Evêque, Le Grand-Lucé, St. Vincent du L'Orouer, Brives and L'Homme on the way to Vendôme.

I'd expected to head directly to Vendôme, but we ended up taking a detour to La Chartres sur le Loir, to take a very welcome beer in the famous Hotel de France, a veritable shrine to all things Le Mans. It's always a great place to stop, if only to look at the exotic machinery which is invariably parked outside! 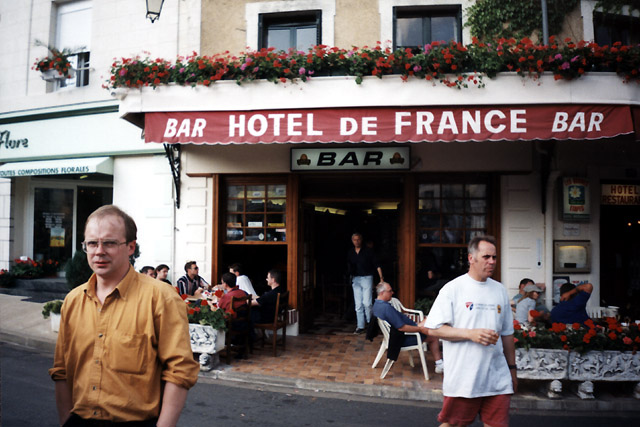 We then carried on via Poncé sur le Loir, Pont de Braye, Troo, Montoir sur le Loir, Les Roches L'Evêque and Varennes to the Auberge de la Madeleine at Vendôme, where the Tourists had stayed previously in '96 and '97.  It was quite a tight squeeze to get all 12 of us in, as our original booking had only been for 8 people, but, with the help of one or two camp-beds (!), we all eventually found suitable berths.  After a quick shower and change of clothes, it was down and outside into the brilliant sunshine for a few more beers.

It's unusual to reach this far into a Le Mans story and to mention a Tourist almost for the first time, but you'll remember that we were still one member short. Steve, who was making his Le Mans debut, had already been in France (on business not pleasure, I believe), and had caught the train to Vendôme the night before. We eventually got to meet him when he got back to the hotel after doing a spot of exploring in the town!  And then it was time for dinner.......