As 1997 ended and we started to think of Le Mans 1998, I didn't expect our arrangements to be any different. Unfortunately however, Ian, our Chief Tourist, was expected to attend a very important retirement function which had very cleverly been arranged for the Saturday night of the Le Mans weekend! Ian did everything he could to get the date changed but the bottom line was - he had to go to the "do". Ian's organisation of our Le Mans trips is all-important, and the end result was that the rest of the Tourists decided to give 1998 a miss. As you might expect though, I was not prepared to give Le Mans a miss and nor was my mate Pierre (Peter to most of his friends!). So instead of Gordon's Tourists, it was to be the "Terrible Twosome" in 1998!

Having travelled with Chequers in '92 and '93 (by which time it had become Motor Racing International), I had no hesitation in booking the cheap and cheerful 3-day trip for the two of us. So it was that Pierre and I caught the MRI coach in Southampton on the evening of Friday 5th June. After some considerable delays at the ferry terminal at Portsmouth (during which we seriously doubted that we would actually get onto the ferry for the crossing to Le Havre!), we were on our way to France once again, arriving at about 7 am on the Saturday morning. 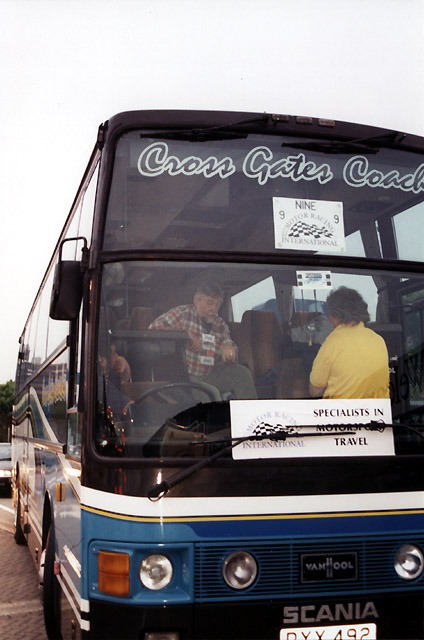 We had an awful trip to the circuit. It seemed that neither our driver or our tour guide (names omitted to protect their identities!) knew the way into Le Mans and we became stuck in one of the worst traffic jams I've ever seen. Having been due to arrive mid-morning and to receive our briefing at the MRI marquee at 12 noon, we didn't actually get into the car park until near 1 pm. 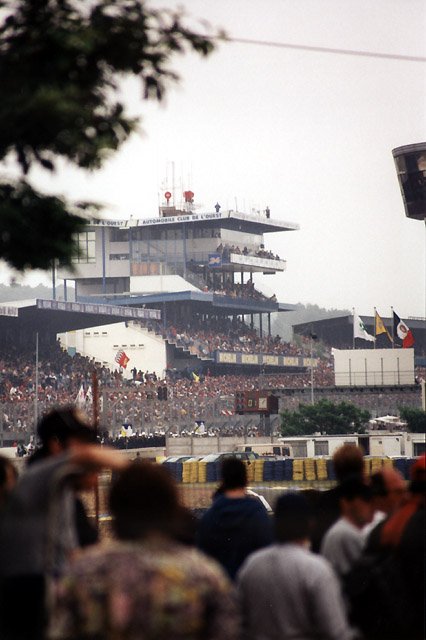 I had already made up my mind that there was little point in trying to get a spot on the tribunes as usual and decided to take up residence for the start at the Ford Chicane. We were both starving and having suffered withdrawal symptoms for a whole year, I indulged in my first merguez of the weekend! Pierre is not one to be persuaded to eat merguez, so he opted for what was described as "steak". It was awful. I didn't have the heart to tell him that the animal from which the meat came had probably been pulled up in the 3.30 at Haydock Park a couple of weeks beforehand!

So here we stayed for the start. It's not a bad place for photographs, although the debris fencing is as intrusive as everywhere else on the circuit. 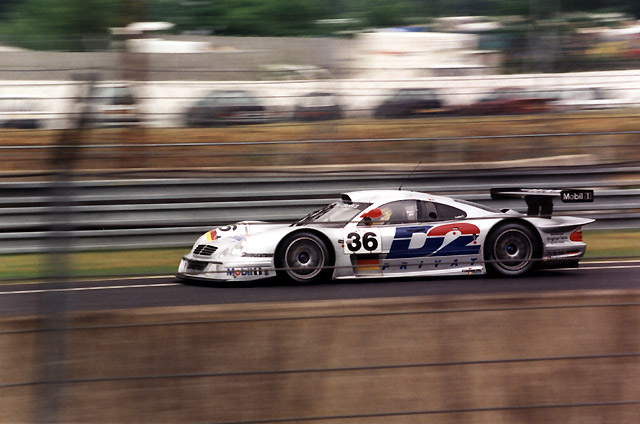 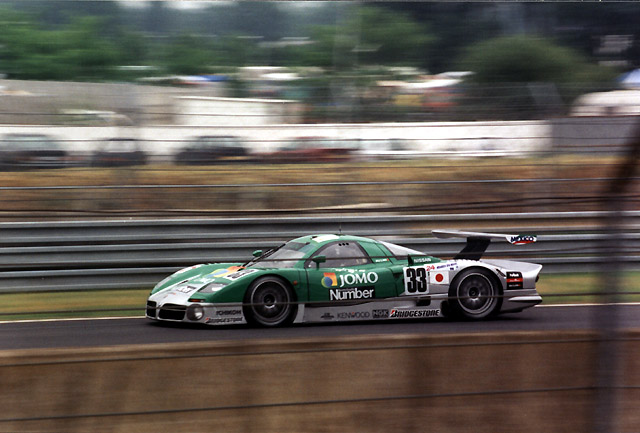 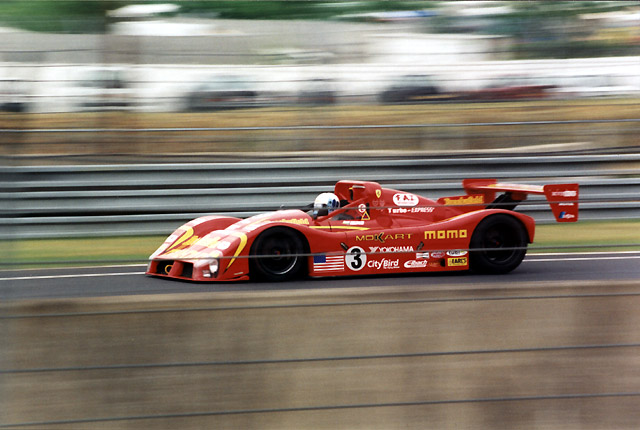 It wasn't long before I had the urge to move on from the Ford Chicane and, inevitably, my intended destination was the Welcome area. I had expected free entry there (as last year) and was therefore rather miffed to find that Pierre and I now had to shell out another 120 francs to get in! Annoying, but still well worth it. 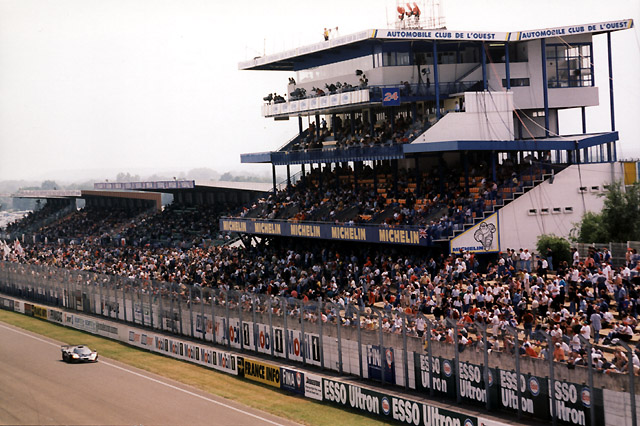 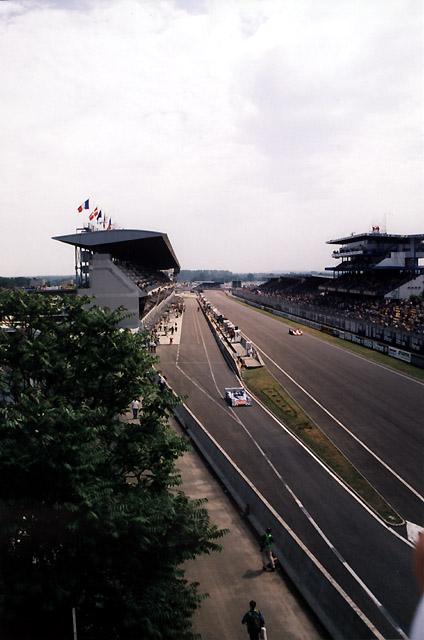 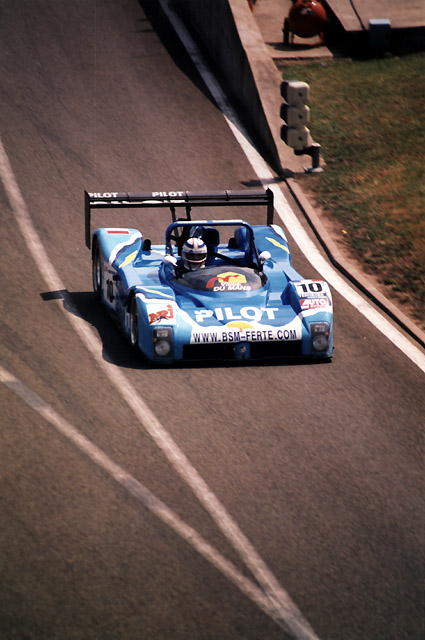 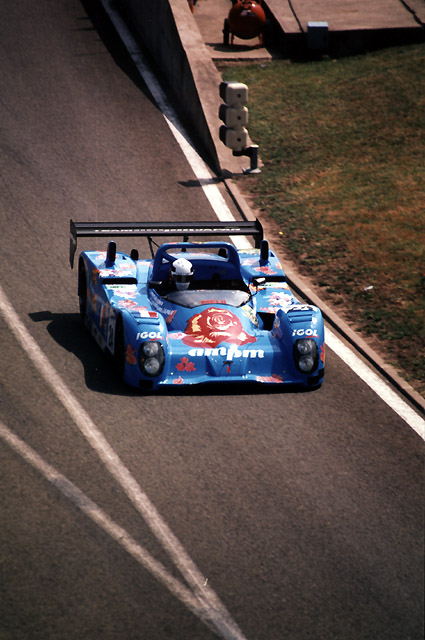 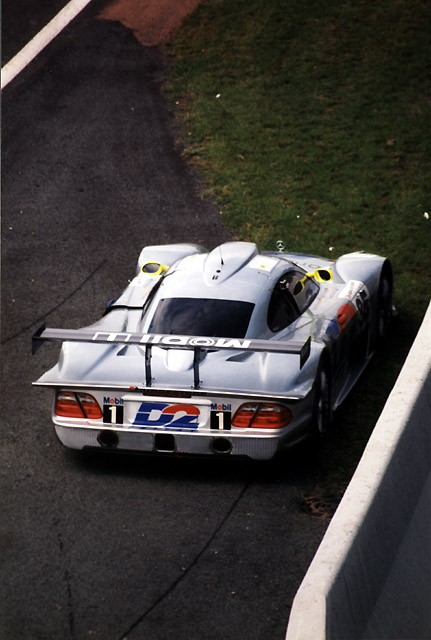 Eventually it was time to move on and Pierre and I headed into the Village. Both Pierre and I are quite partial to the odd Grand Marnier crepe and we were surprised to find the stall moved from the position it had held ever since I first came to Le Mans in 1986. Didn't stop us having a few though! 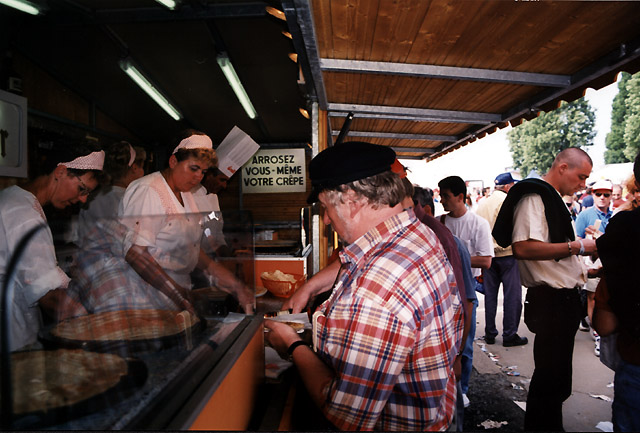 Our immediate hunger dealt with (!), we pressed on from the Village to the Dunlop Chicane, where the camera saw plenty of action again. As many of my visitors (and those who visit the forum) will know, I am a great fan of the Toyota GT One, and I took quite a lot of pictures of these sensational cars during the weekend. I make no excuses at all for including a few of them here! 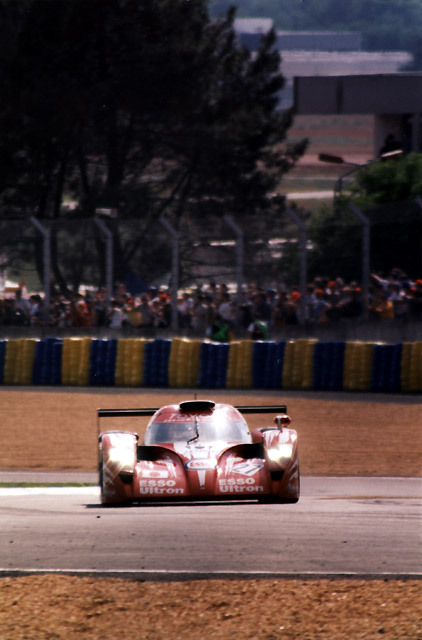 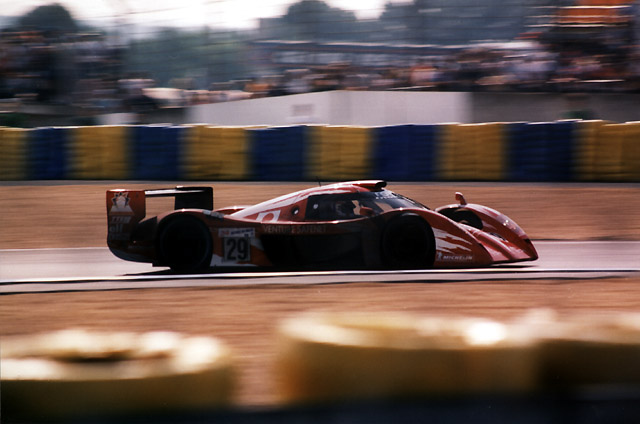 When making our bookings with MRI, I had also booked tickets for the "excursions" to Mulsanne Corner and Indianapolis/Arnage. I had it in my head that our trip was timed for 7.50, so we didn't exactly rush about. We returned to our coach for a quick change of t-shirt (it was a bit hot!) at about 7.25. I then checked our tickets and found our trip was at 7.20 and not 7.50! The staff at MRI were really unhelpful, the reaction basically being "tough - you missed out". Not to be beaten, however, we squeezed ourselves onto the next available coach, the rep finally agreeing on the basis that if two more people turned up with the correct tickets, we'd have to get off again. They didn't!

We didn't spend a lot of time at Arnage, as we thought we would make up time and catch the correct coach to Mulsanne, but I still managed to shoot a couple of reels there. 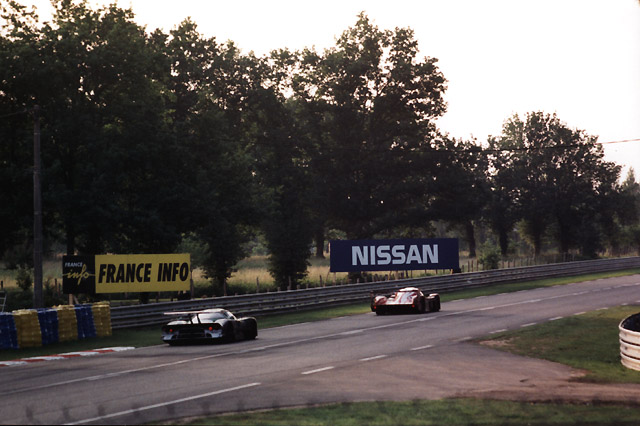 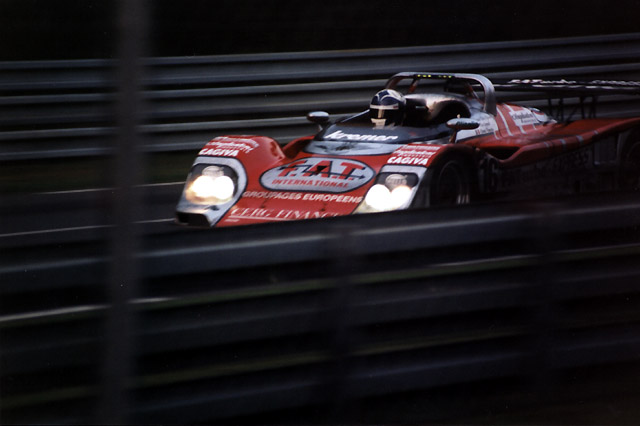 We got to Mulsanne Corner and had about an hour to enjoy the view from there. As the light began to fade, I realised it was the first time I had been there as the night drew on - the first time in 13 years! 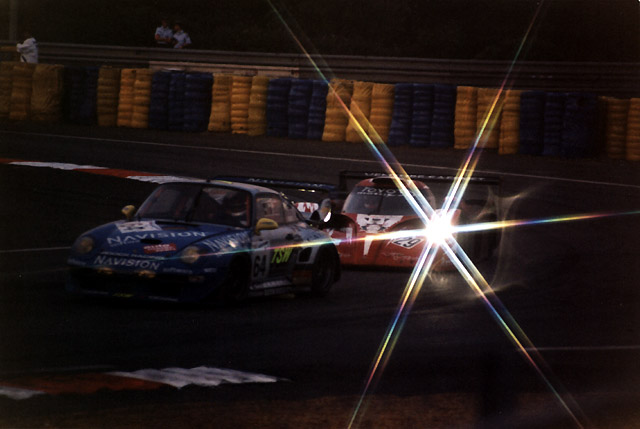 We had quite a wait for our coach and didn't get back to the garage bleu until 11 o'clock, passing Le Belinois on the way! (I didn't want to stop to eat there, but I could have done with a "watering stop"). After picking up my tripod from the coach and adding a jumper for the expected night time chill, Pierre and I made our way back to the MRI marquee for a spot of supper.