In the same way as I did recently with my 1988 photos and story, I've now updated my 1989 story. As I've said elsewhere, the scans are aren't perhaps as 'crisp' as we would hope for with digital photography nowadays!

For some strange reason 1989 always struck me as being something of a stop-gap year, so to speak. After the excitement of 1988, there was undoubtedly much promise for '89, with Mercedes mounting a very strong challenge to Jaguar, not only at Le Mans, but in the WSC as well. The official works Porsche team was supposedly no more, but Hans Stuck and Bob Wollek (formerly works Porsche drivers both), were to be found in a works-supported Joest Porsche, which was naturally expected to provide stern competition for the two official "works" teams, and in actual fact, with a little more luck during the night, would probably have won the race. As I recall, we didn't all meet up at Ian's on the Saturday this time. The team was a mixture of those who had been with us during the previous three years, with only one newcomer. As before, the core of the team remained the same, myself, Ian, Alan, Martyn and Robert. Back was Bruce for the first time since 1986, and Ian and Ben also returned, apparently none the worse for their experiences in 1987. Dave, Robert's neighbour was also back again for more punishment! The only newcomer was Terry, a dentist by profession, and a keen photographer. I recall that on Saturday, we picked him up from his home in Botley, before heading off for Portsmouth.

One amusing (and slightly annoying) story arose at the very beginning of the trip. Ian and I, being the two real sports car enthusiasts had both purchased Autosport, which, as always the week before the race, contained the annual pull-out Le Mans supplement. Inside this was a picture of the fans on the tribunes opposite the pits, celebrating Jaguar's win in 1988. And there, amongst the sea of smiling faces were Richard and Dave! I remember Dave was very chuffed indeed to find himself in print. (Top left - Dave is wearing the white jumper with black shirt collar and sunglasses while Richard is to his right in the turquoise shirt with a camera to his eye). 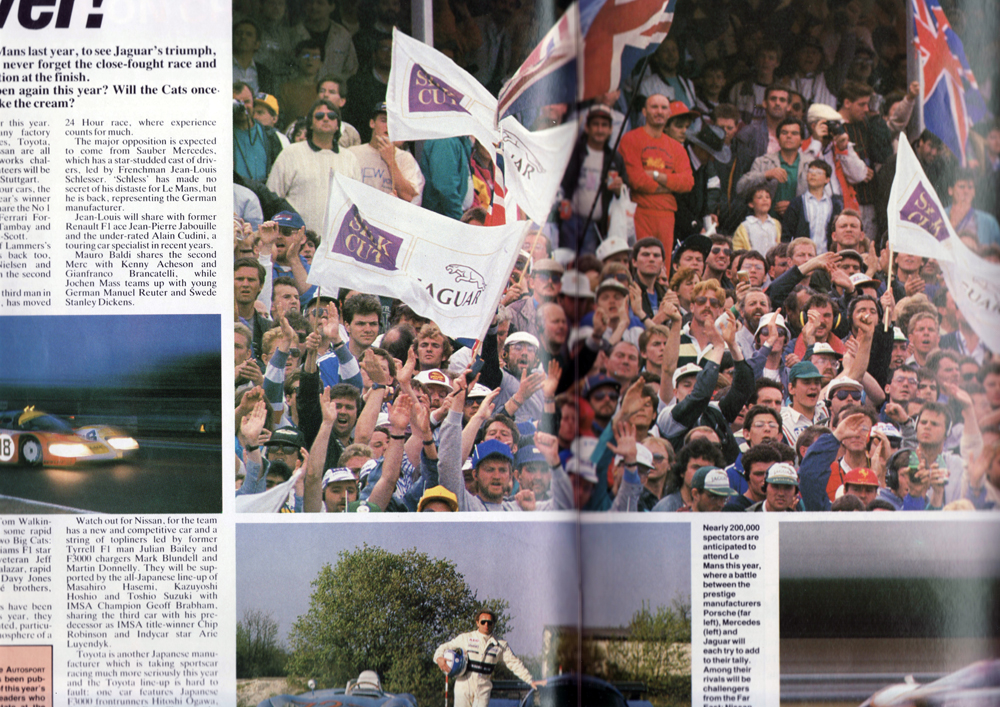 I said that this was annoying, and it was - someone pinched my copy of the supplement, and I never saw it again! I did actually write to Autosport to try and get a copy of the photograph, but unfortunately I received no reply. (I finally managed to acquire another copy of the supplement in 1995!) In 1989 for the first time we sailed from Portsmouth to St. Malo, around the peninsular. We knew it would be a much longer journey, before we set out, but we had no idea it was going to take the best part of ten hours! Unfortunately, we were aboard a rather small ferry, and it took a very long time to get there, although the crossing was, as in the past three years, very calm indeed. 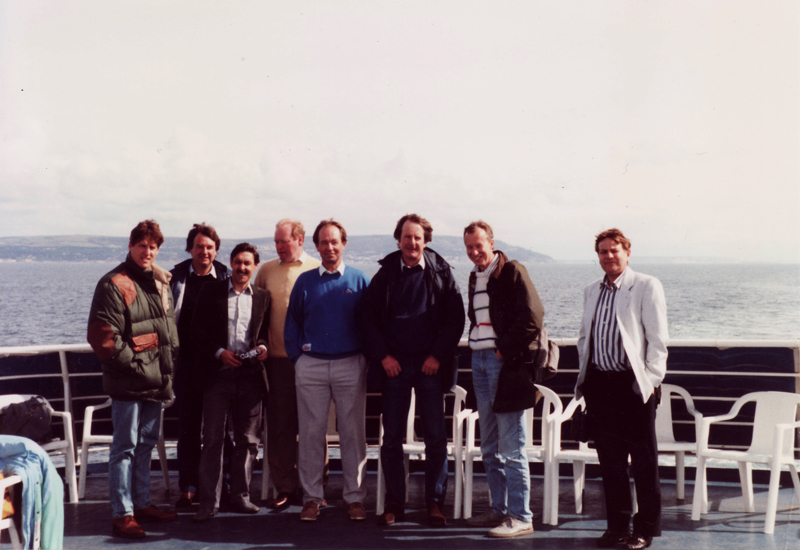 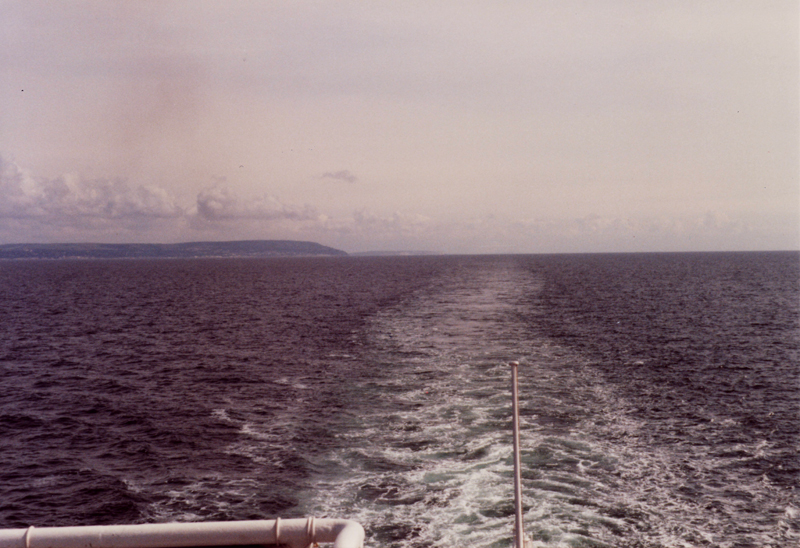 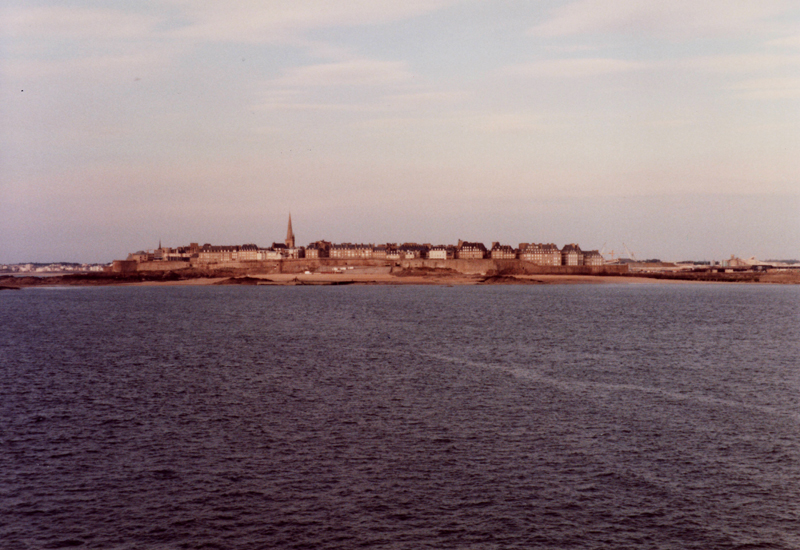 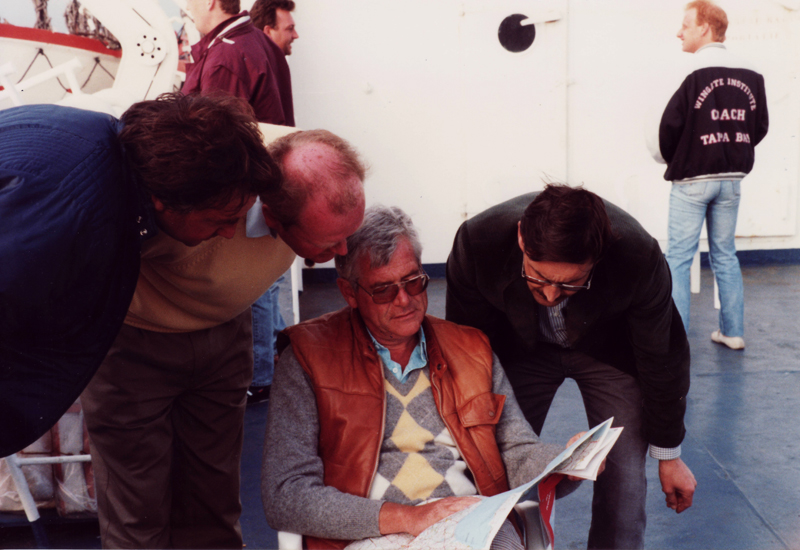 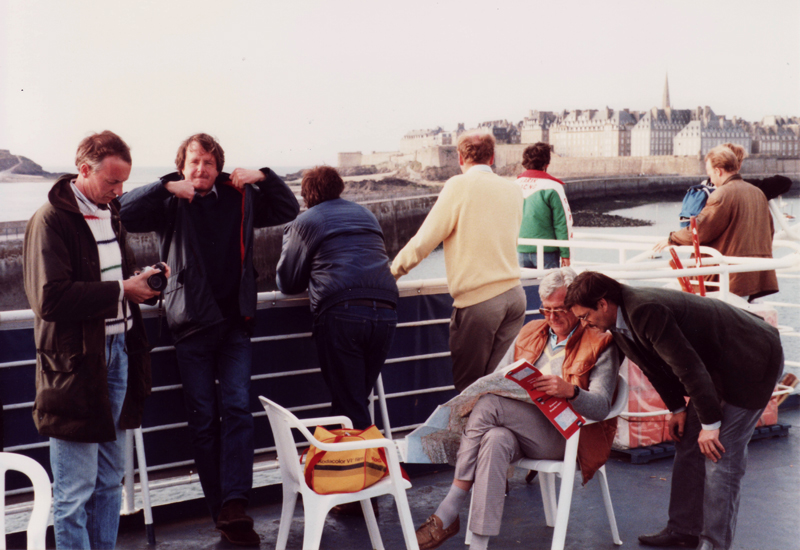 Fortunately, after docking at St. Malo we had only a very short journey to our overnight stop at Cancale. Finding Cancale and the Hotel Le Continental was undoubtedly one of the highspots of Le Mans 1989. 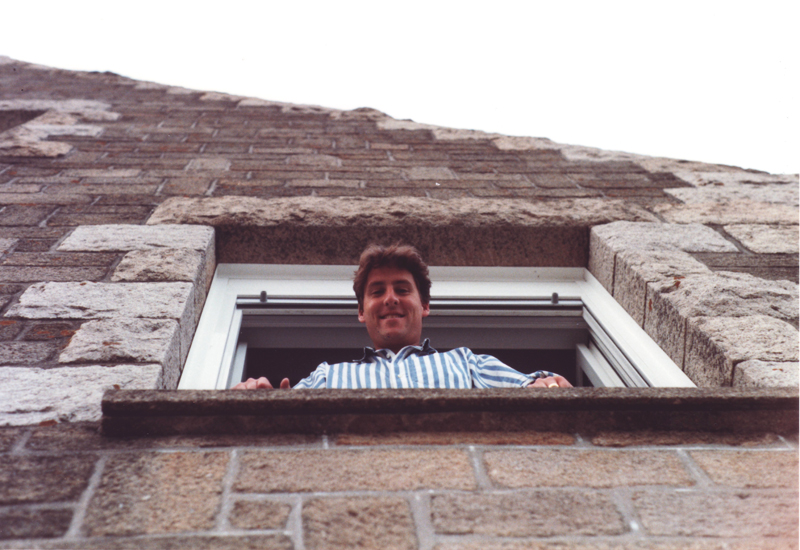 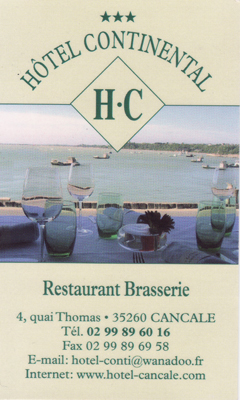 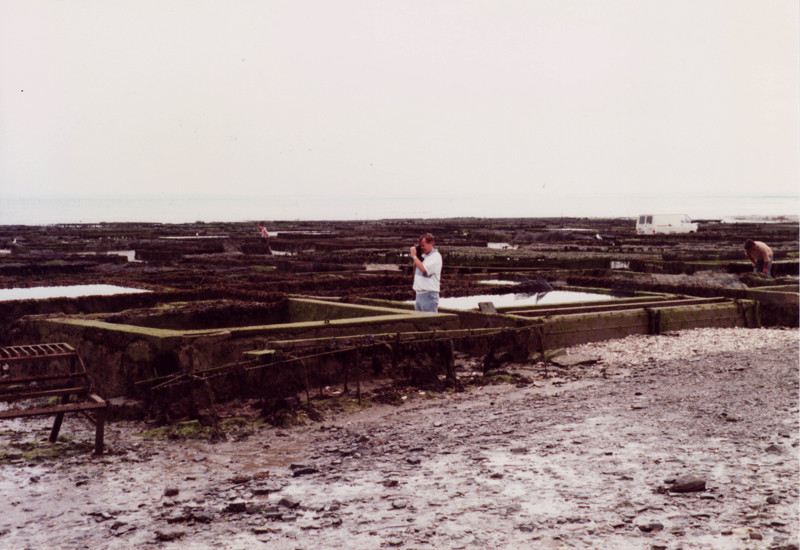 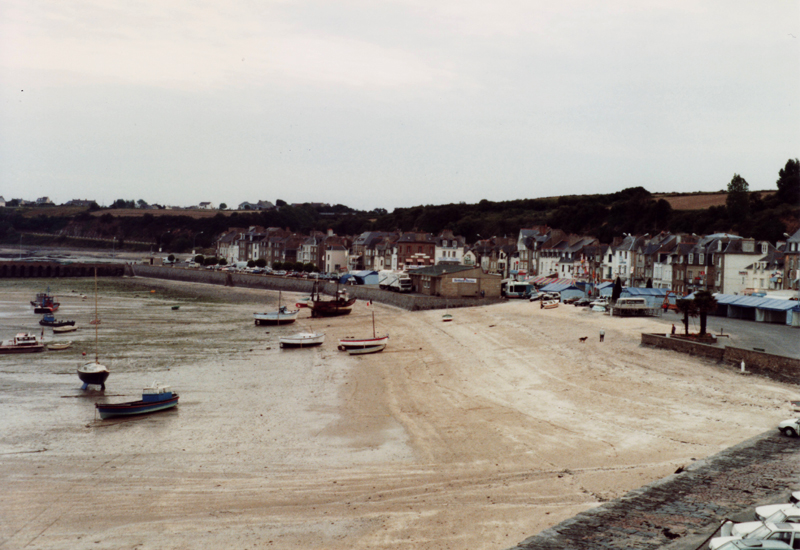 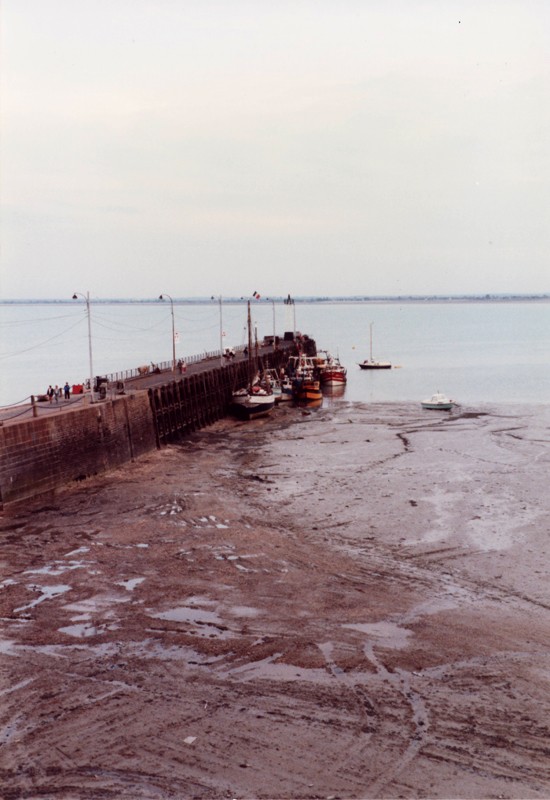 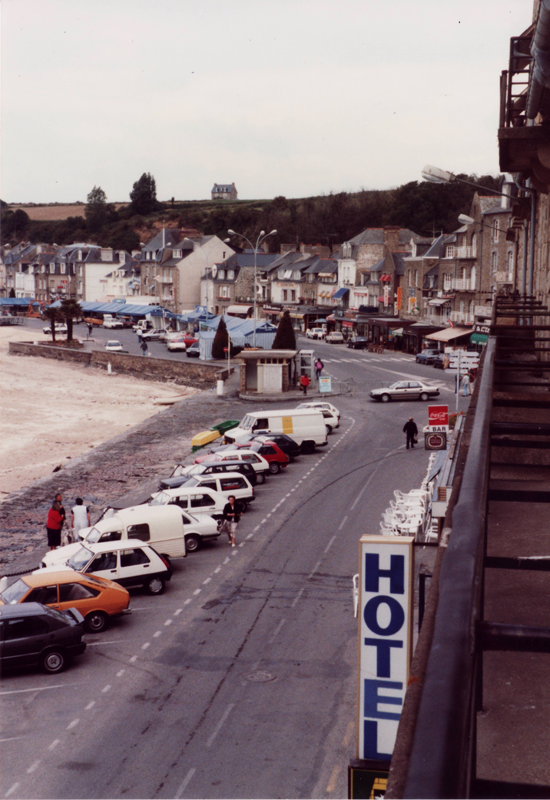 A smashing little place, a major area for French oyster farming, and very well known for seafood generally. The hotel was very comfortable, and provided a superb view out over the bay first thing in the morning - very bracing! The hotelier was a pleasant fellow, who took great pride in his English, which was admittedly very good. No communication problems here! The food was excellent too, and I think that we all left the place on Saturday morning hoping that we might get an opportunity to return at some time.

It was while we were getting our gear together on Saturday morning, before heading off to Le Mans that it was realised that Ian had made a bit of a boo-boo over the return ferry booking. As usual, it was Martyn who spotted the problem when he happened to look at the ferry tickets. Instead of booking our return on Monday, we were scheduled to return on Tuesday! There was some alarm on learning this, as several members of the team had commitments at home on Monday and couldn't afford to be stuck in France until Tuesday, notably Terry, who was anticipating a waiting-room full of cavities and fillings!

As far as I was concerned, it wasn't a major problem, as I've always taken a few days off after a Le Mans weekend, to make sure that I can catch up on the sleep that I know I won't get overnight on Saturday and Sunday. Having said this, Jayne was expecting me back sometime on Monday, and I rather anticipated a frosty reception if I didn't get back until Tuesday! Robert called home to his wife, and we all hoped that she would somehow manage to organise a place for us on a ferry home on Monday. After breakfast, and an inspection of the massive oyster beds, we headed off in the cars (Ben with another 911 drophead!), not knowing how successful these negotiations were likely to be!

1989 would prove to be the year that sorted out the men from the boys! Robert had been complaining now for some years that he was no longer content to kip down in the car or in a tent at the circuit on Saturday night. Having said this, for the last three years he had failed to do anything about it. 1989 was the year when these good (?) intentions came to fruition. Certain minds (Robert’s and Alan’s, in particular), were very definitely made up, and on the way to the circuit we stopped at several motels and eventually a couple of rooms were found for the Saturday night. Robert, Bruce and Alan decided to take a room, as did Ian T. and Ben. (I can't remember about Terry, but I believe he remained at the circuit).

These arrangements made, we headed off again, now rather late for the 4 p.m. start. We arrived at the circuit, and took up our place in the garage rouge as usual. For the first time, I actually took some photos shortly after our arrival, with gear being removed from car boots (including that of Ian's brand new 535i). Alan was looking remarkably Gallic in his prized Ray-bans! 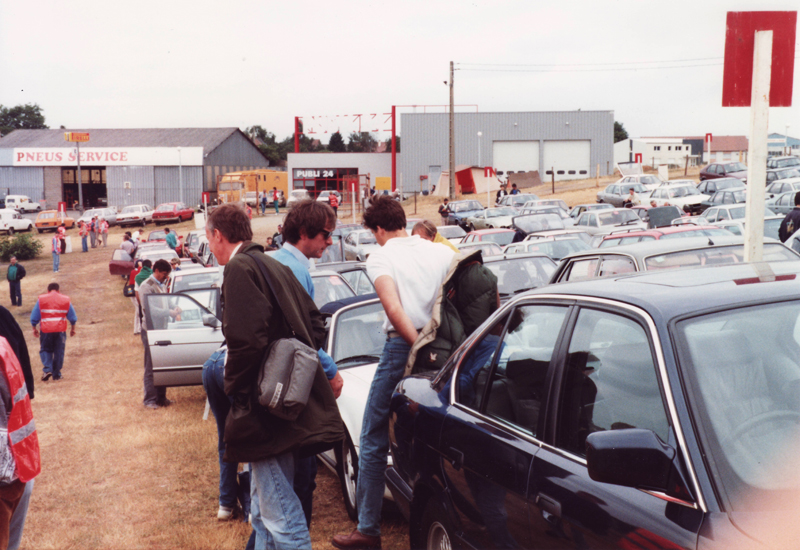 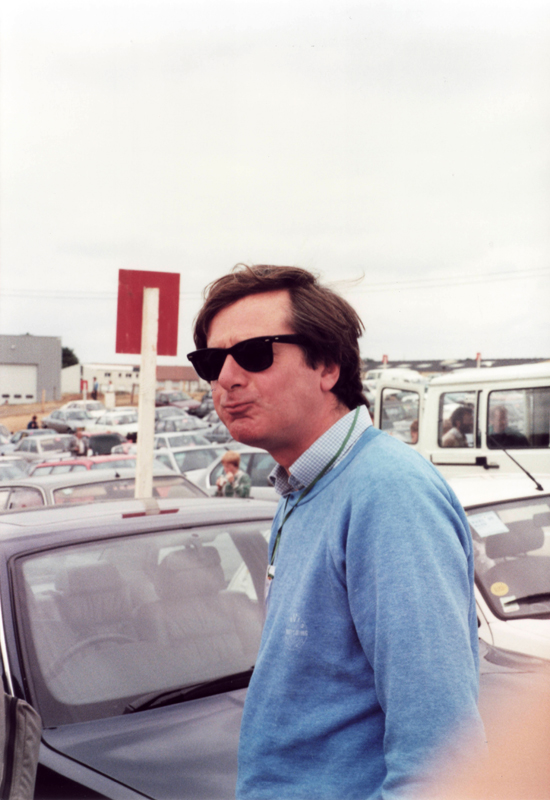 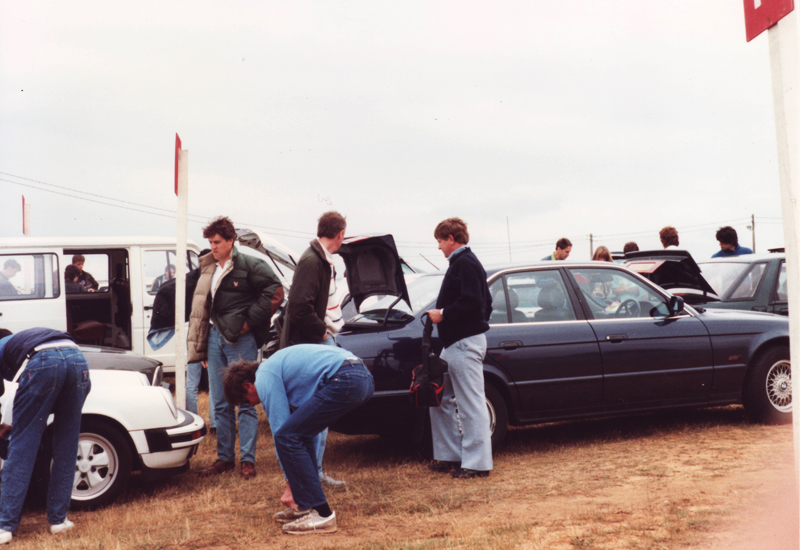