Once off of the boat (in fairly grey and murky weather, but, thankfully, no rain!), the coach driver then started off on the road to Le Mans.  After a short while, he rather surprisingly realised that he had very little fuel on board and started to search for a filling station.  Strangely we had some difficulty finding one!   After cruising around for what seemed like ages (with our likely arrival time at the circuit getting later and later by the minute), we finally stopped in a place called Sées where we filled up at a tiny filling station in a very narrow side-street.  We all disembarked here, and Peter and I took a wander around the town, which had an open-air market which was well under way by this time. 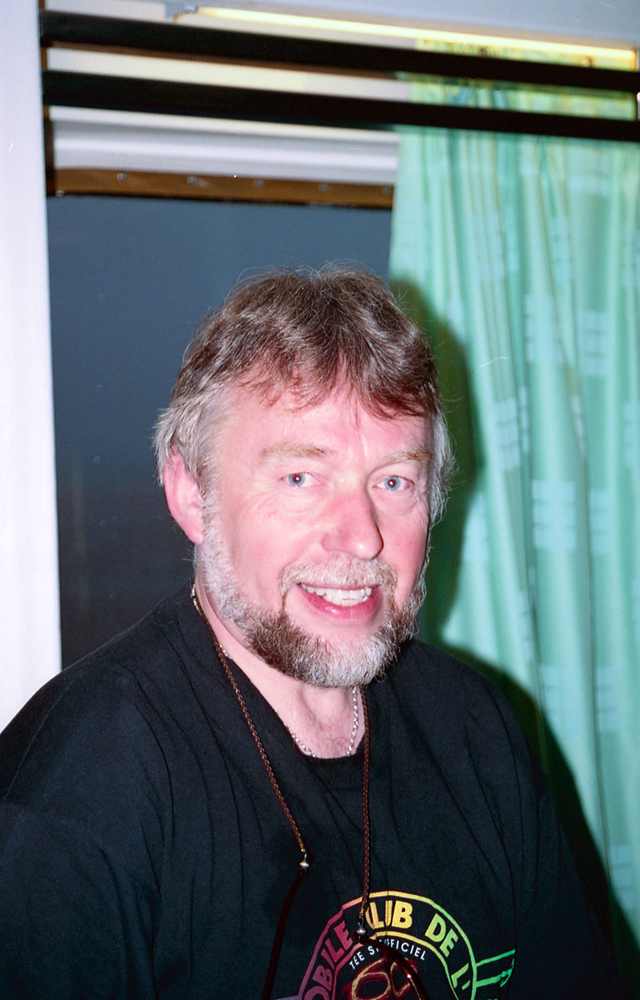 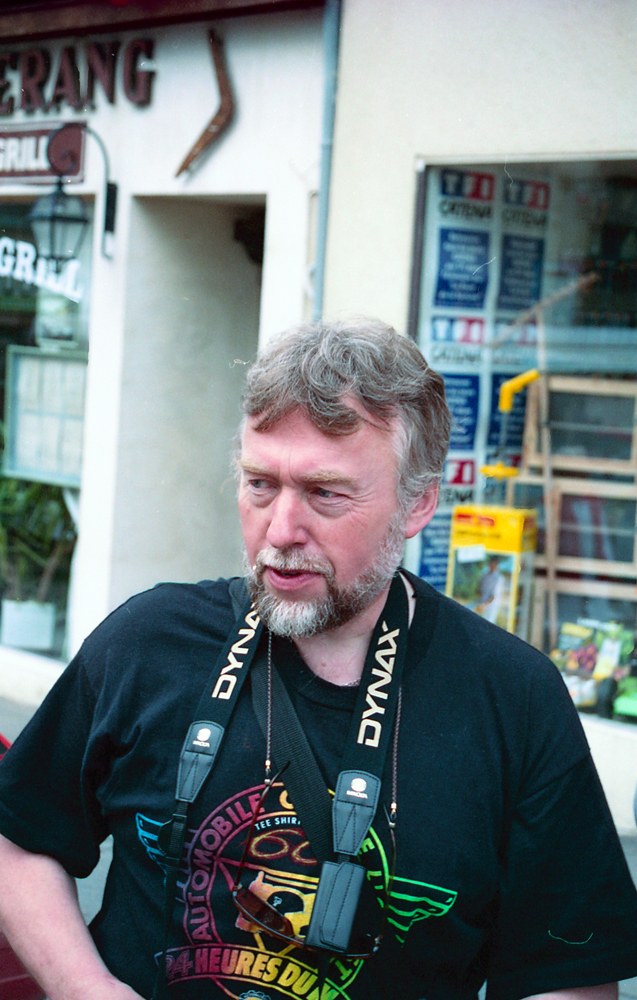 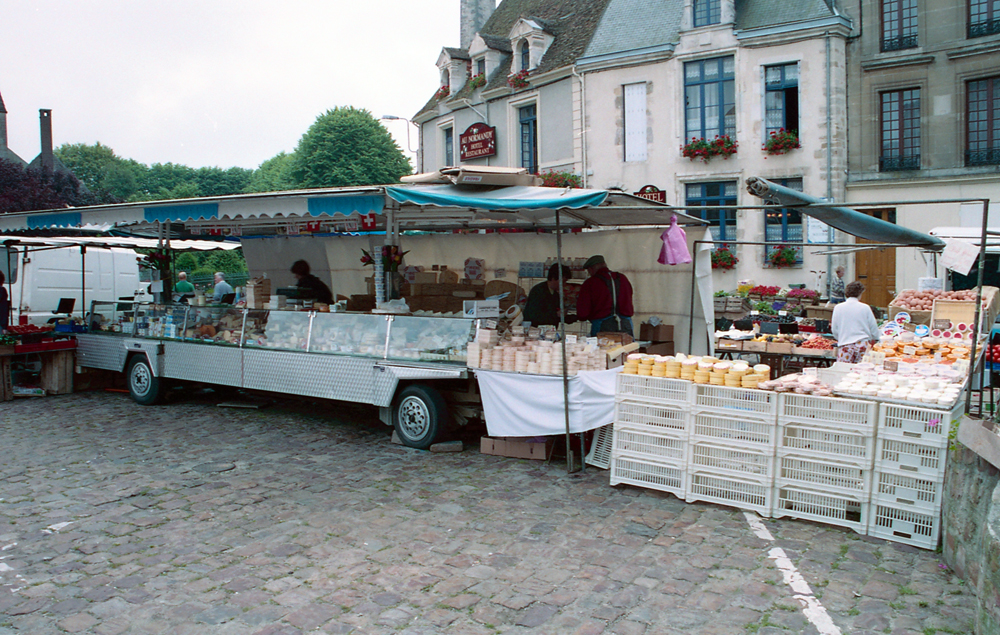 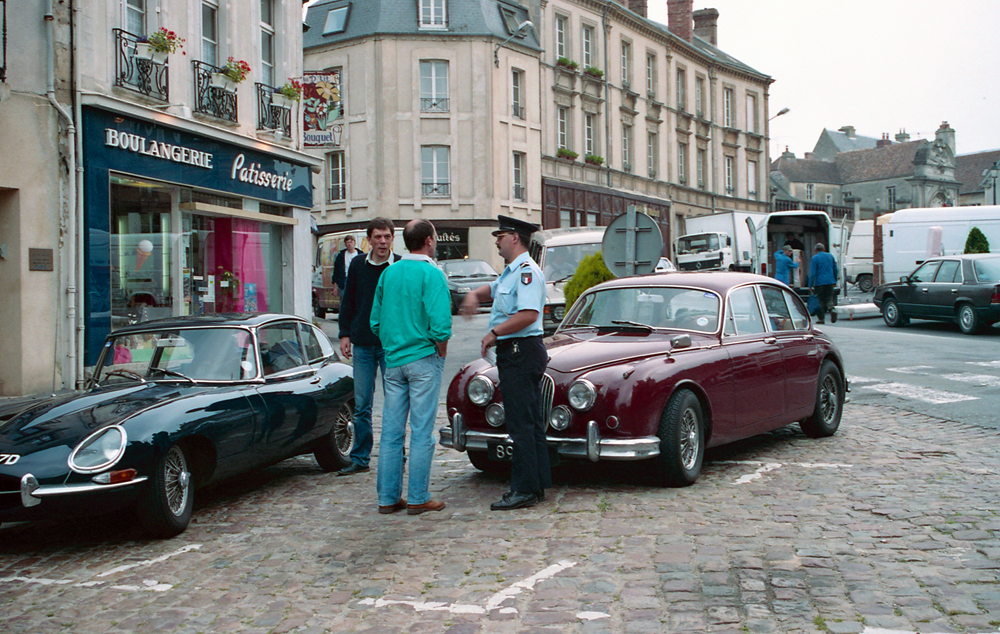 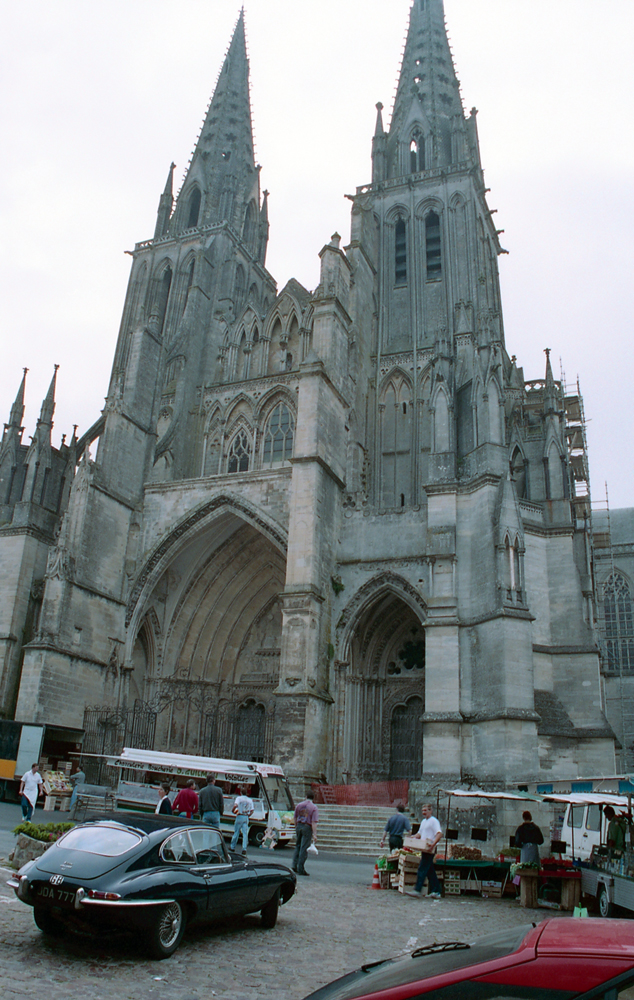 All in all, I suppose that we lost a good hour searching for and obtaining fuel and eventually arrived at the outskirts of Le Mans, much later than in 1992 (although it was good to be able to stretch our legs in Sées).  As you may recall from the 1992 story, last year we got to the circuit well before the start of the race-morning warm-up for the Le Mans cars and were able to have a wander around and find our seats in the Maison Blanche grandstand before the warm-up started.   In 1993 disappointingly, we arrived at the tail-end of the warm-up period, although all of the usual excitement which arrival normally brings was as evident as ever.  We were lucky in one sense, however.  As we drove along the main road which leads behind the start/finish straight and into the car park behind the main stands, we saw the Simpson Ferrari being carried back to the paddock on a flat-bed after its big shunt at the Porsche Curves with the Toyota driven by Eddie Irvine.  I was even able to grab a couple of shots of the car through the windscreen of the coach as the lorry passed us.   We were soon parked in Garage Bleu, and it was time to unload our gear and make decisions about what we would need with us for the next few hours.  (Although the coach would remain open to us throughout the week-end it was a ten-minute walk back from the tribunes, and, bearing in mind all of the walking that we were likely to be doing later on, we didn't want to make the trip more often than necessary!). 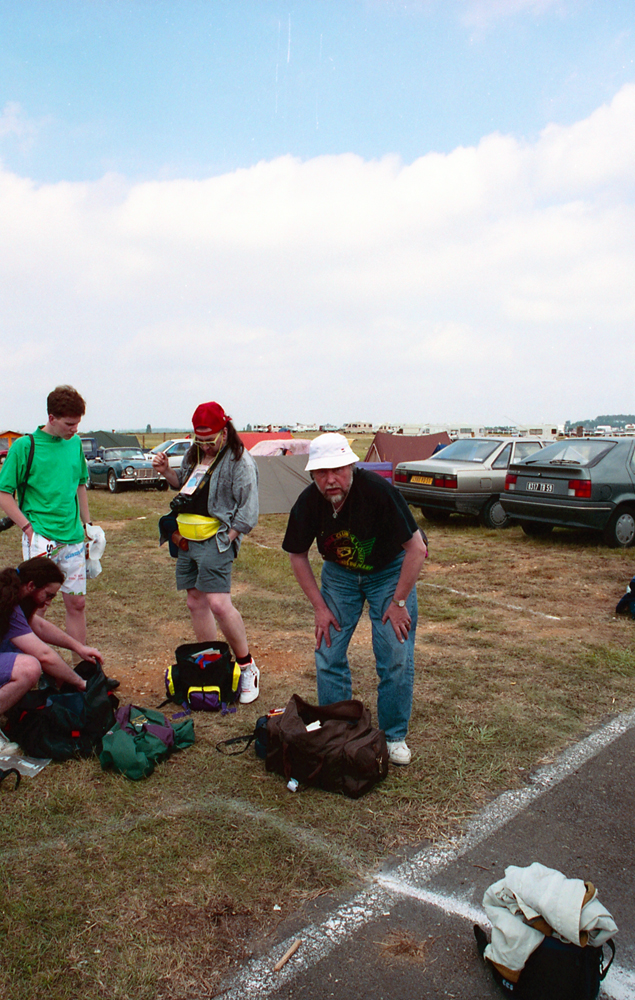 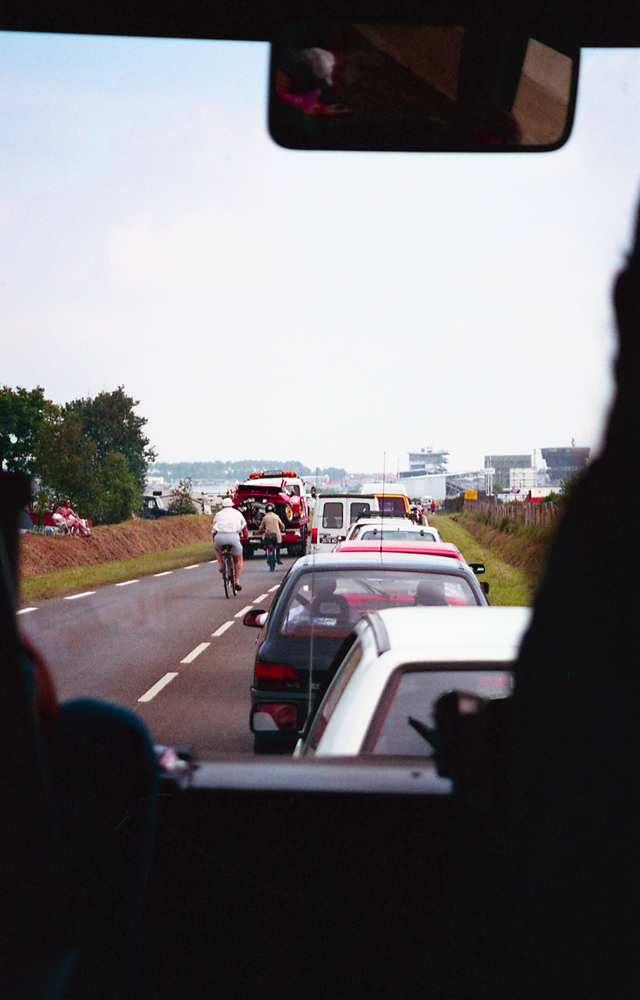 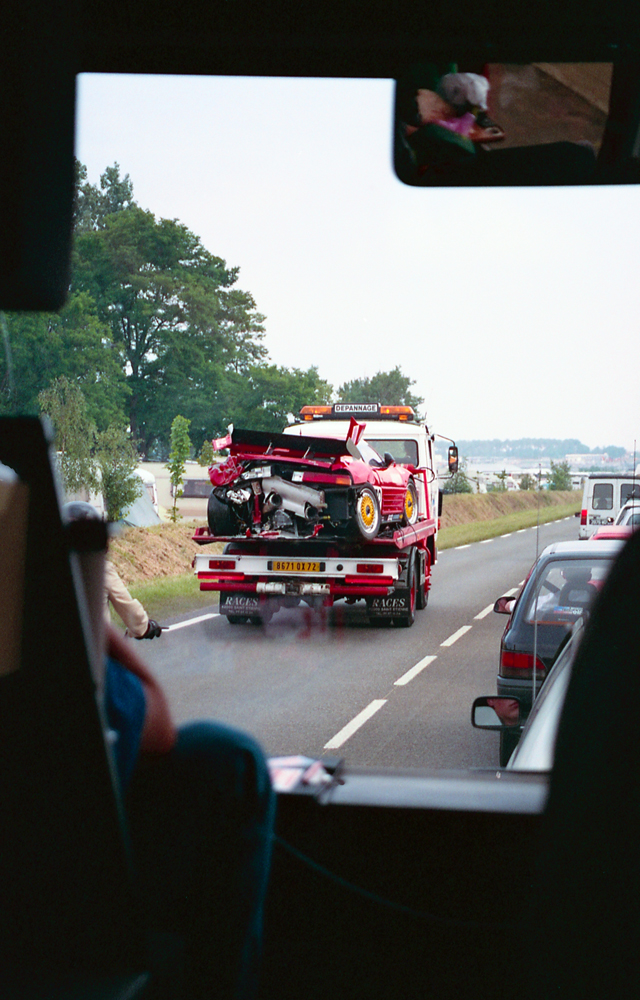 In addition to my tripod (which I actually left on the coach at first), I had purchased a new Cullman monopod, to steady my shots.  My new EOS 100 had made its Le Mans debut in 1992.  I found that when using the 100-300mm zoom lens, the camera was much more susceptible to camera-shake than had been the case with my old Minolta and its 70-210mm zoom.  Of course, the murky weather and general lack of light in 1992 hadn't helped.  I took the monopod with me into the circuit.   Due to our later arrival we were able to go to our "briefing" in the Motor Racing International marquee almost immediately.  The marquee and the associated arrangements were exactly the same as with Chequers in 1992.  The marquee was situated in the same place, near the Maison Blanche grandstand on the outside of the Ford Chicane, and food and drink would be available from here throughout the 24 hours.   Much more importantly (bearing in mind my awful experiences of 1987!), the organisers had once again provided some portaloos, which for an investment of only five francs, could bring quite blessed relief!  (The one thing that I learned very early on in the Le Mans experience is that the toilets at the circuit are generally to be avoided at all costs!).   By this time (about 1.00 p.m.), it was clear that we were thankfully unlikely to suffer from the same dreadful weather conditions as in 1992.  It was already very warm indeed, and definitely t-shirt (and for some, shorts) weather.

Unfortunately, the one thing which doesn't come across so well in my early pictures from the circuit at this time is just how bright, sunny and warm it was.   We had our complimentary glass of wine in the marquee and listened to our host, Gary Champion, who introduced us to Perry McCarthy.  Perry had sparred with the likes of Andy Wallace and Johnny Herbert (both of whom now Le Mans winners) in British F3 back in 1986/87, and had moved on to sports cars in the USA.    Perry had recently got himself mixed up in the dreadful Andrea Moda F1 effort.  Unfortunately for Perry, while the talent may well have been there, the funding certainly was not, and his career was now in the doldrums.  (I suspect that he had actually come over to Le Mans in the hope of acquiring a late drive, as so many drivers do.  If so, alas he was unsuccessful).   Nevertheless, Perry talked to us about what being a racing driver at Le Mans is all about, despite the fact that (to the best of my memory), he had never actually taken part in the great race!  After this pleasant interlude, Peter and I then set about locating our seats in the ACO grandstand. 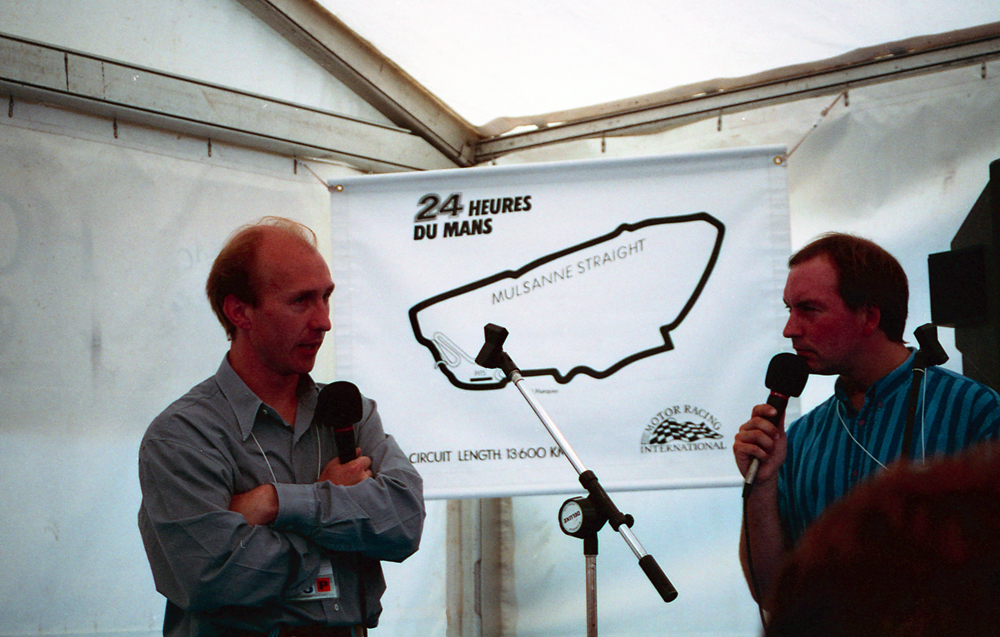 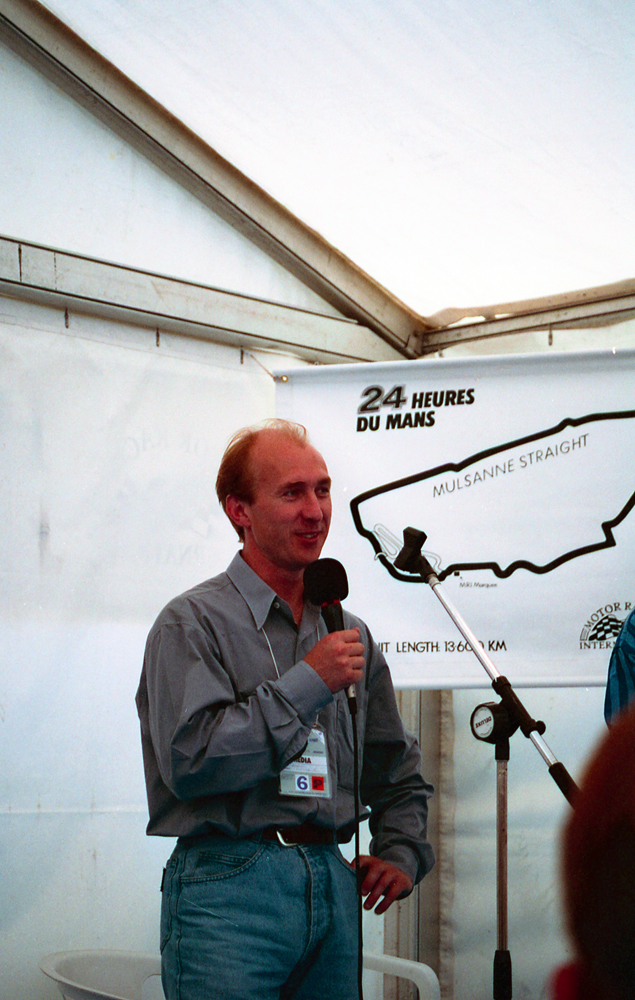